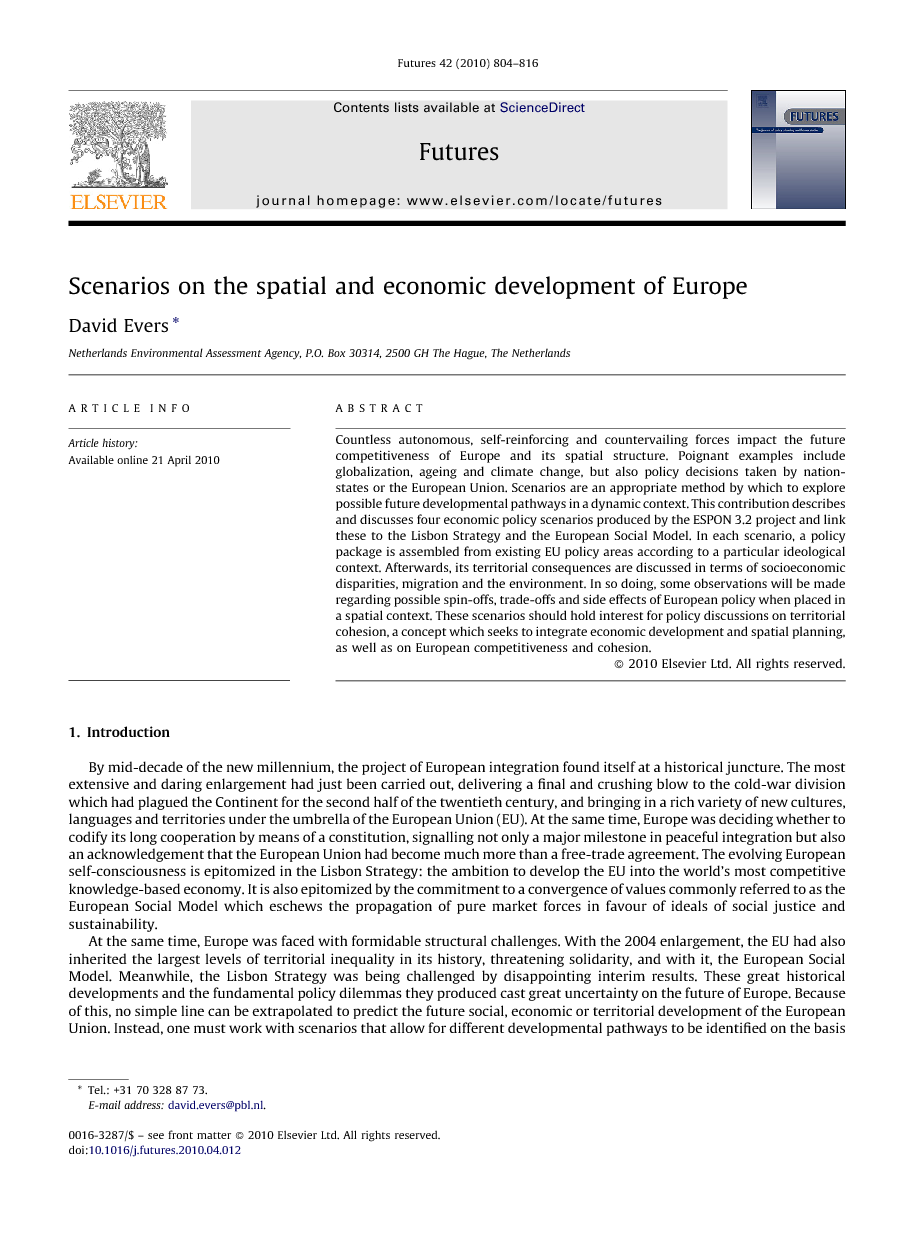 Countless autonomous, self-reinforcing and countervailing forces impact the future competitiveness of Europe and its spatial structure. Poignant examples include globalization, ageing and climate change, but also policy decisions taken by nation-states or the European Union. Scenarios are an appropriate method by which to explore possible future developmental pathways in a dynamic context. This contribution describes and discusses four economic policy scenarios produced by the ESPON 3.2 project and link these to the Lisbon Strategy and the European Social Model. In each scenario, a policy package is assembled from existing EU policy areas according to a particular ideological context. Afterwards, its territorial consequences are discussed in terms of socioeconomic disparities, migration and the environment. In so doing, some observations will be made regarding possible spin-offs, trade-offs and side effects of European policy when placed in a spatial context. These scenarios should hold interest for policy discussions on territorial cohesion, a concept which seeks to integrate economic development and spatial planning, as well as on European competitiveness and cohesion.

By mid-decade of the new millennium, the project of European integration found itself at a historical juncture. The most extensive and daring enlargement had just been carried out, delivering a final and crushing blow to the cold-war division which had plagued the Continent for the second half of the twentieth century, and bringing in a rich variety of new cultures, languages and territories under the umbrella of the European Union (EU). At the same time, Europe was deciding whether to codify its long cooperation by means of a constitution, signalling not only a major milestone in peaceful integration but also an acknowledgement that the European Union had become much more than a free-trade agreement. The evolving European self-consciousness is epitomized in the Lisbon Strategy: the ambition to develop the EU into the world's most competitive knowledge-based economy. It is also epitomized by the commitment to a convergence of values commonly referred to as the European Social Model which eschews the propagation of pure market forces in favour of ideals of social justice and sustainability. At the same time, Europe was faced with formidable structural challenges. With the 2004 enlargement, the EU had also inherited the largest levels of territorial inequality in its history, threatening solidarity, and with it, the European Social Model. Meanwhile, the Lisbon Strategy was being challenged by disappointing interim results. These great historical developments and the fundamental policy dilemmas they produced cast great uncertainty on the future of Europe. Because of this, no simple line can be extrapolated to predict the future social, economic or territorial development of the European Union. Instead, one must work with scenarios that allow for different developmental pathways to be identified on the basis of policy preferences. This contribution discusses the results of the thematic economy scenarios drawn up in the framework of the ESPON 3.2 project (see editor's introduction). Two of the four economy scenarios will be elaborated to illustrate the dilemmas surrounding the implementation of the Lisbon Strategy and two to illustrate the dilemmas of solidarity and integration in the wake of European enlargement.