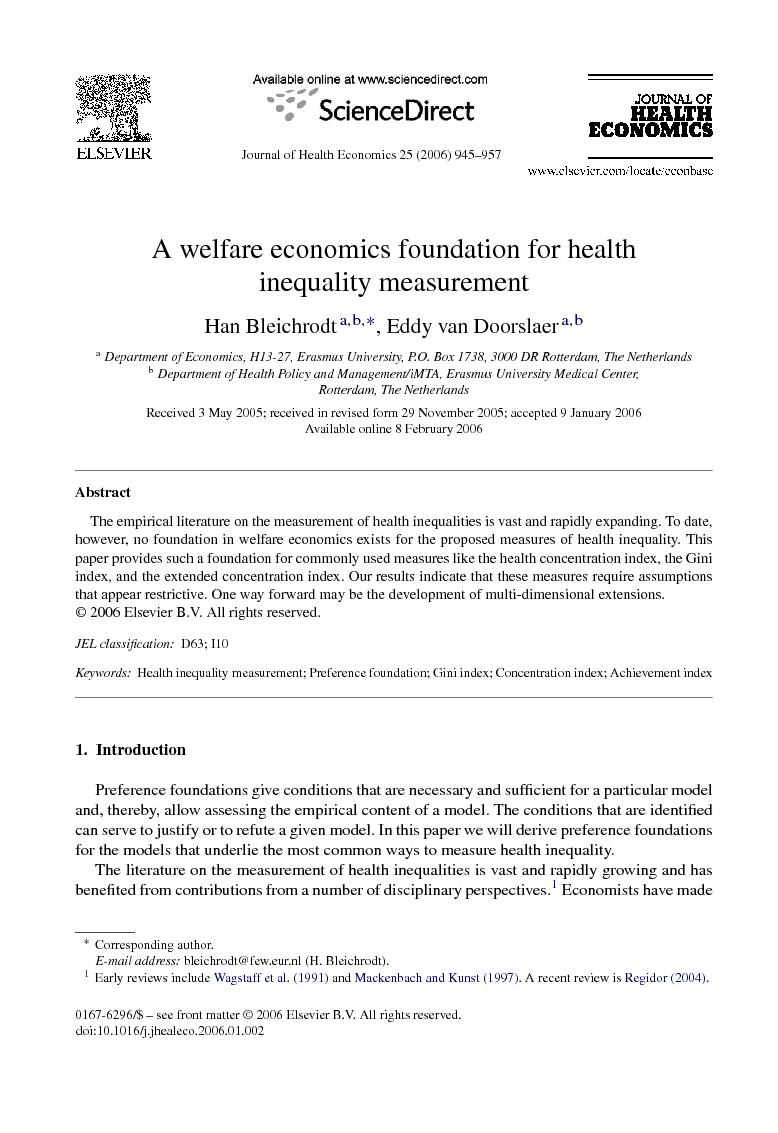 The empirical literature on the measurement of health inequalities is vast and rapidly expanding. To date, however, no foundation in welfare economics exists for the proposed measures of health inequality. This paper provides such a foundation for commonly used measures like the health concentration index, the Gini index, and the extended concentration index. Our results indicate that these measures require assumptions that appear restrictive. One way forward may be the development of multi-dimensional extensions.

Preference foundations give conditions that are necessary and sufficient for a particular model and, thereby, allow assessing the empirical content of a model. The conditions that are identified can serve to justify or to refute a given model. In this paper we will derive preference foundations for the models that underlie the most common ways to measure health inequality. The literature on the measurement of health inequalities is vast and rapidly growing and has benefited from contributions from a number of disciplinary perspectives.1 Economists have made substantial contributions to the empirical literature on this subject, thereby often drawing on the accumulated knowledge in the field of income inequality measurement. Le Grand (1989) and Le Grand and Rabin (1986) have proposed the use of the Gini coefficient for the measurement of pure inequality in mortality. Wagstaff et al. (1989) have proposed the use of the concentration index for the measurement of relative socioeconomic inequality in health and health care. More recently, van Doorslaer and Jones (2003) and Wagstaff and van Doorslaer (2004) have drawn attention to the simple relationship between both types of rank-dependent health inequality measures, while Koolman and van Doorslaer (2004) have illustrated the redistribution interpretation of the concentration index. Wagstaff et al. (2003) have shown how the concentration index can be decomposed by sources, and Clarke et al. (2003) have illustrated its decomposition by components. Clarke et al. (2002) have shown that inequality comparisons based on absolute and relative inequality measures need not coincide. Finally, building on results obtained by Yitzhaki (1983) and Lerman and Yitzhaki (1984), Wagstaff (2002) has made the implicit weighting of individuals’ health states in the concentration index more explicit, and has proposed the use of a so-called achievement index to simultaneously embody concerns about the mean and the degree of inequality of a health distribution. While a welfare economics foundation for the measurement of income inequality and the comparison of income distributions has long been provided (Kolm, 1969, Atkinson, 1970, Lambert, 2001 and Dutta, 2002), such a foundation has so far been lacking for the proposed measures of health inequality. Stecklov and Bommier (2002) have explored how the Atkinson and Bourguignon (1982) approach to measuring multi-dimensional inequality (e.g. in income and mortality) could be used to provide a welfare economics foundation for health inequality measurement and arrived at a negative conclusion. They restricted attention, however, to a specific notion of a just or equitable distribution of health, namely equality of access (see p. 502) and their negative conclusions are a consequence of this notion. The commonly used measures of health inequality are based on a different notion of equity, namely equality of health.2Fleurbaey (2005a) has justified the use of the concentration curve for health by interpreting it as a component in the decomposition of the Lorenz curve for welfare. This paper takes a different route than Stecklov and Bommier (2002) and Fleurbaey (2005a) by demonstrating how some conditions for preference relations can usefully be applied to provide a welfare economics foundation for the commonly used measures of inequality in health. It draws on the work by Bleichrodt et al. (2004) to characterize the rank-dependent QALY model and on some results that have been derived in the theoretical literature on inequality measurement. By providing such a general preference foundation we hope that our paper will clarify what assumptions are implicit in the adoption of a particular measure. In what follows, Section 2 describes the main measures of health inequality. Section 3 gives a preference foundation for these measures. We characterize the Gini index, the concentration index and Wagstaff's (2002) achievement index. We also briefly discuss the extension of our techniques to characterize and design absolute measures of health inequality. Section 4, which concludes the paper, discusses the appeal of the conditions introduced throughout the paper and, hence, of the measures that they characterize, and considers possible extensions and generalizations. All proofs are in Appendix A.

In this paper we have discussed under what conditions a welfare economics foundation can be given to the largely empirical literature on the measurement of health inequality. The conditions of anonymity, the existence of an equally distributed equivalent level of health, weak ordering and monotonicity generally seem acceptable. Sen (1973) has argued that completeness may be too restrictive given that many of our intuitions on inequality only support partial orderings. Monotonicity may in some cases be too restrictive, e.g. when health in society is concentrated among few people a policy maker may not consider it desirable to give these “happy few” a large gain in health when the health of the others in society, the “left-behinds”, improves only marginally. Such decision situations will be rare, however, and empirical evidence does not seem to support such preferences (Bleichrodt et al., 2005). Therefore, monotonicity does not seem restrictive as a general principle. Finally, anonymity can be restrictive may be violated if the policy maker cares about other attributes of an individual than only his health and his socioeconomic status. Additivity is more controversial. It is sometimes observed that societies become more sensitive to inequalities when they grow richer and the same may be true for health. When the total level of health is low, inequalities in health may not be important. As societies become healthier, the concern for inequalities in health may increase. If this were to happen, violations of additivity may arise. Consider the following example where there are two (groups of) individuals and health is measured on the scale [0,1]. It may be that a policy maker prefers (0.5,0.1) to (0.3,0.3) because then at least one individual has a reasonable quality of life. However, the policy maker may also prefer (0.8,0.8) to (1.0,0.6), because the former is more equitable and all individuals have a reasonable quality of life. These two preferences violate additivity because (0.8,0.8) = (0.3,0.3) + (0.5,0.5) and (1.0,0.6) = (0.5,0.1) + (0.5,0.5). That said, we believe that in most real-world decision contexts additivity will not be violated and, hence, we tend to consider additivity a plausible condition. Doubts may be raised about the validity of the principle of population. If only the health of people is replicated, but not other characteristics like consumption and income can we really say that social welfare is the same in the original situation and in the m-fold replication? We are inclined to answer this question in the negative. Let us finally turn to the principle of (income-related) health transfers. The principle of health transfers, used in the characterization of the generalized Gini index, says that transferring health from someone with higher health to someone with lower health does not lead to a reduction in social welfare provided the transfer does not change the health ranking of the individuals. One may object against this that it is not always desirable to transfer health from a healthier person to a less healthy person, e.g. when the healthier person is poor and the less healthy person is rich. The principle of income-related health transfers, which is the socioeconomic inequalities version of the principle of health transfers and which was used in the characterization of the generalized concentration index, requires that transferring health from someone who is better-off in terms of socioeconomic status to someone who is worse-off does not lead to a reduction in social welfare provided the transfer does not change the ranking of the individuals in terms of socioeconomic status. The plausibility of this principle is contestable. It does not seem desirable to transfer health from a person with high living standards to a person with lower living standards when the person with high living standards is in poor health and differences in living standards are small. In general, the principle of health transfers will, both in its pure inequalities version and in its socioeconomic inequalities version, be more acceptable the stronger the correlation between health and other attributes such as income. The Gini condition and the CI condition, the stronger versions of the principle of health transfers and the principle of income-related health transfers, respectively, seem arbitrary and the equity weights implied by these conditions will not meet with unanimous approval. The above observations on the principle of population and the principle of (income-related) health transfers suggest that it may be desirable to study multivariate concepts of inequality: the policy maker generally cares not only about the distribution of health, but also about the distribution of other attributes, e.g. income, educational attainment, etc. To characterize health inequality measures in such a setting requires that additional assumptions be imposed. In particular, we should assume that the social decision maker's preferences over the various attributes are separable in the attributes. Also, the conditions imposed in Section 3 should be rephrased in a multidimensional setting, which raises complications for the formulation of the principle of (income-related) health transfers and additivity. The translation of the other conditions is straightforward. Theoretical treatments of multidimensional inequality measurement have been provided by Tsui (1995) and Gajdos and Weymark (2005) but we are not aware of any empirical applications other than the initial attempt of Atkinson and Bourguignon (1982) to illustrate their dominance conditions for the comparison of inequality in two dimensions (per capita incomes and life expectancy). Fleurbaey (2005b) circumvented the problem of the existence of multiple attributes by reducing what is basically a two-dimensional problem (both health and income matter) to a one-dimensional problem. He introduced the concept of “healthy-equivalent consumption”. This is basically equal to the individual's income minus his willingness to pay for perfect health. By converting the health dimension into an income dimension, Fleurbaey rephrased the two-dimensional problem into the income space and then the usual conditions for a social welfare function defined over distributions of income apply. In that sense, the results of Section 3 can also be applied to Fleurbaey's rephrased problem.