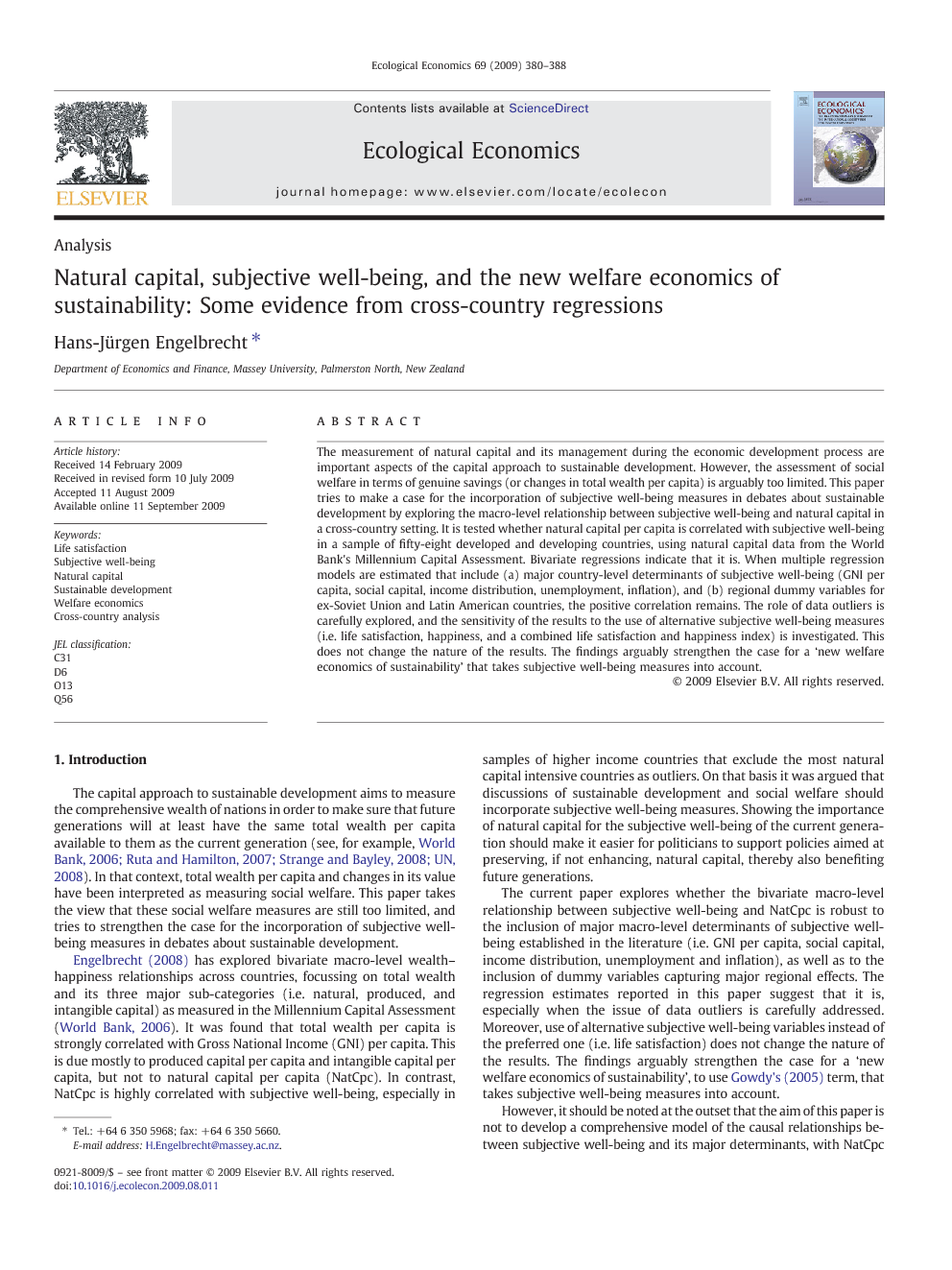 The capital approach to sustainable development aims to measure the comprehensive wealth of nations in order to make sure that future generations will at least have the same total wealth per capita available to them as the current generation (see, for example, World Bank, 2006, Ruta and Hamilton, 2007, Strange and Bayley, 2008 and United Nations (UN), 2008). In that context, total wealth per capita and changes in its value have been interpreted as measuring social welfare. This paper takes the view that these social welfare measures are still too limited, and tries to strengthen the case for the incorporation of subjective well-being measures in debates about sustainable development. Engelbrecht (2008) has explored bivariate macro-level wealth–happiness relationships across countries, focussing on total wealth and its three major sub-categories (i.e. natural, produced, and intangible capital) as measured in the Millennium Capital Assessment (World Bank, 2006). It was found that total wealth per capita is strongly correlated with Gross National Income (GNI) per capita. This is due mostly to produced capital per capita and intangible capital per capita, but not to natural capital per capita (NatCpc). In contrast, NatCpc is highly correlated with subjective well-being, especially in samples of higher income countries that exclude the most natural capital intensive countries as outliers. On that basis it was argued that discussions of sustainable development and social welfare should incorporate subjective well-being measures. Showing the importance of natural capital for the subjective well-being of the current generation should make it easier for politicians to support policies aimed at preserving, if not enhancing, natural capital, thereby also benefiting future generations. The current paper explores whether the bivariate macro-level relationship between subjective well-being and NatCpc is robust to the inclusion of major macro-level determinants of subjective well-being established in the literature (i.e. GNI per capita, social capital, income distribution, unemployment and inflation), as well as to the inclusion of dummy variables capturing major regional effects. The regression estimates reported in this paper suggest that it is, especially when the issue of data outliers is carefully addressed. Moreover, use of alternative subjective well-being variables instead of the preferred one (i.e. life satisfaction) does not change the nature of the results. The findings arguably strengthen the case for a ‘new welfare economics of sustainability’, to use Gowdy's (2005) term, that takes subjective well-being measures into account. However, it should be noted at the outset that the aim of this paper is not to develop a comprehensive model of the causal relationships between subjective well-being and its major determinants, with NatCpc being one of them, although it will hopefully stimulate research on such a model. There might well be reverse causation, at least to a certain extent, between the ‘dependent’ and some of the ‘explanatory’ variables, as well as amongst the latter. Such effects can only be taken into account when additional data in the time dimension become available. Moreover, the paper does not comment on how to improve the still imperfect measurement of natural capital, how to maintain or increase natural capital, or to what extent there is substitutability between natural capital and other inputs in the production process (the issue of strong versus weak sustainability; see, for example, Ekins et al., 2003 and Comolli, 2006). The paper is organized as follows. Section 2 briefly introduces the vexed issue of how to define sustainable development, and reviews some prior literature that focuses on the link between subjective well-being and environmental variables. The general methodology is introduced in Section 3. Section 4 reports the definition of variables and data sources. Bivariate and multiple regression results are reported in Section 5. Section 6 contains concluding comments. Appendix A reports summary statistics and lists the countries included in the data sample. The main data set used is available from the working paper version of this paper (http://econ.massey.ac.nz/publications/discuss/DP0903.pdf).

The aim of this paper is to explore whether the bivariate macro-level relationship between subjective well-being and NatCpc is robust to the inclusion of major determinants of subjective well-being. The results obtain suggest that it is, despite NatCpc being the smallest of the wealth categories making up total wealth in the Millennium Capital Assessment. Moreover, the ‘explanatory power’ of the regressions is high, rising to almost 90% when outliers are deleted. The differences in results between LSF and SWB regressions are not found to be especially large, although, like suggested by Inglehart et al. (2008), the use of SWB seems preferable. It leads to parameter estimates more in line with prior expectations (especially for the social capital variable). Estimates for HPY regressions seem less satisfactory. They have lower explanatory power and they are the only model (3) regressions for which parameter estimates of Un and Infl are statistically insignificant. The findings support the view of those, like Chiesura and de Groot (2003), who argue that natural capital provides immaterial and often intangible functions that are nevertheless important for the quality of human life, i.e. ‘socio-cultural functions’, but that are usually excluded from the valuation of natural capital. They also provide support for Kahneman and Sugden's (2005) advocacy of the use of subjective well-being measures for policy evaluation in environmental economics. In short, the findings further strengthen the argument that discussions of sustainable development, natural capital and social welfare should incorporate subjective well-being measures. They are arguably an important element of a new welfare economics of sustainability. However, a crucial caveat applying to all the conclusions derived from the empirical analysis reported in this paper is that the data used, especially those for NatCpc, are assumed to be meaningful, despite being limited and unsatisfactory in many ways. There is plenty of scope for extending the analysis in future. For example, data limitations prevented separate multiple regression analysis for the group of high income countries. Evidence from bivariate regressions suggests natural capital might have the largest impact on subjective well-being in these countries, especially when the top NatCpc-intensive countries are excluded as outliers. Comparable natural capital estimates at different points in time are needed to explore this issue further. Larger macro-level data sets for other variables might become available in the near future, for example for social capital variables. This might enable researcher to exploit the full sample of 120 countries for which wealth data are provided by the World Bank. Should comparable natural capital data become available for different time periods for this large group of countries, it would be possible to explore the causal relationships between the main ‘explanatory’ variables in some detail in order to obtain further insights into the role of natural capital in the development process. In should also be noted that the relationship between subjective well-being and natural capital is likely to be important in assessing the effects of climate change. Heal (2008) comments that climate change will deplete natural capital and reduce the flow of ecosystem services. He argues that we need to better understand this impact and how, in turn, it affects human welfare. Arguably, subjective well-being research can and must contribute to solving this task. Last but not least, future research should disaggregate natural capital in order to determine whether some of its components contribute a lot more to subjective well-being than others. Natural capital's impact on subjective well-being is an aspect of its ‘criticality’ that has often been overlooked. Subjective well-being research can potentially provide an additional and complementary approach to identifying a subset of core or critical natural capital.