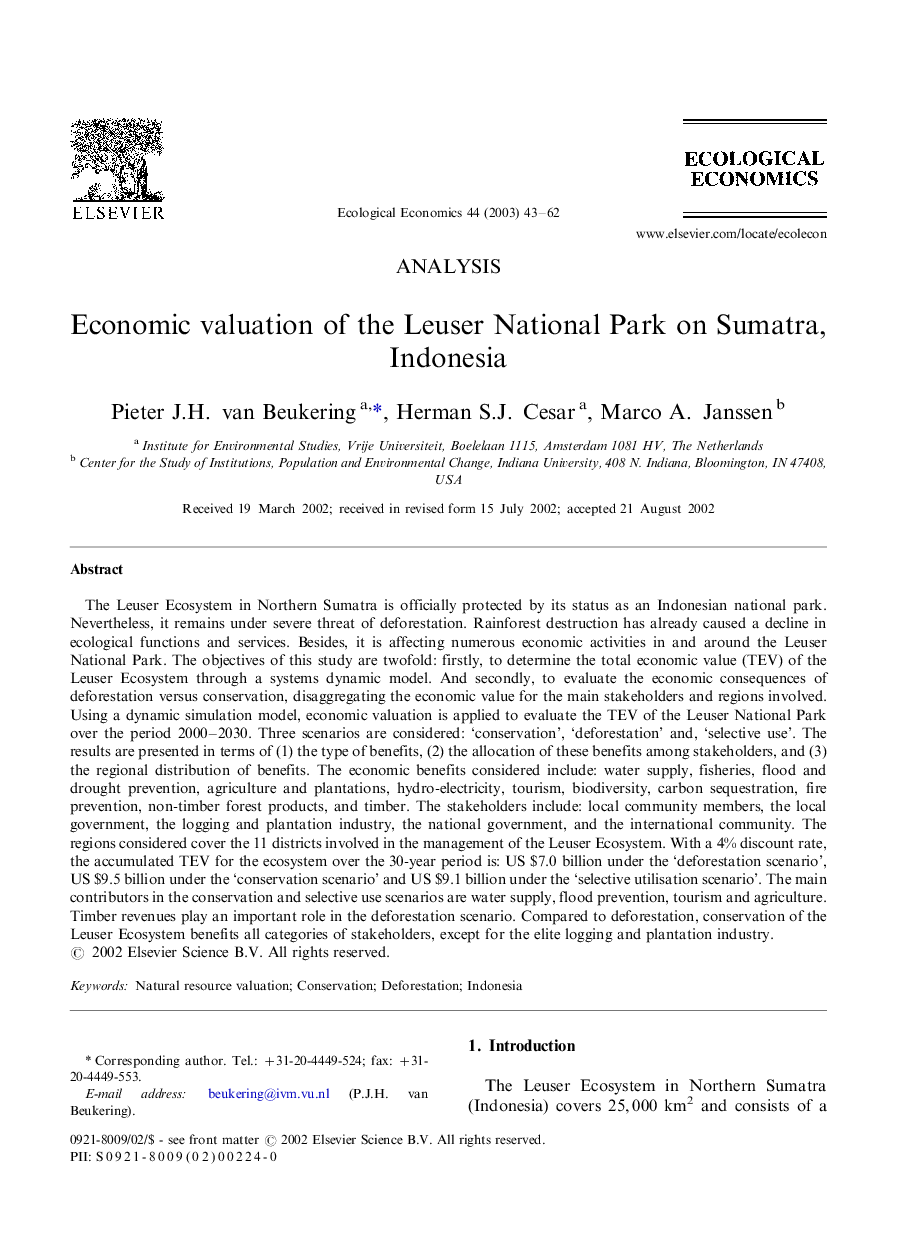 The Leuser Ecosystem in Northern Sumatra is officially protected by its status as an Indonesian national park. Nevertheless, it remains under severe threat of deforestation. Rainforest destruction has already caused a decline in ecological functions and services. Besides, it is affecting numerous economic activities in and around the Leuser National Park. The objectives of this study are twofold: firstly, to determine the total economic value (TEV) of the Leuser Ecosystem through a systems dynamic model. And secondly, to evaluate the economic consequences of deforestation versus conservation, disaggregating the economic value for the main stakeholders and regions involved. Using a dynamic simulation model, economic valuation is applied to evaluate the TEV of the Leuser National Park over the period 2000–2030. Three scenarios are considered: ‘conservation’, ‘deforestation’ and, ‘selective use’. The results are presented in terms of (1) the type of benefits, (2) the allocation of these benefits among stakeholders, and (3) the regional distribution of benefits. The economic benefits considered include: water supply, fisheries, flood and drought prevention, agriculture and plantations, hydro-electricity, tourism, biodiversity, carbon sequestration, fire prevention, non-timber forest products, and timber. The stakeholders include: local community members, the local government, the logging and plantation industry, the national government, and the international community. The regions considered cover the 11 districts involved in the management of the Leuser Ecosystem. With a 4% discount rate, the accumulated TEV for the ecosystem over the 30-year period is: US $7.0 billion under the ‘deforestation scenario’, US $9.5 billion under the ‘conservation scenario’ and US $9.1 billion under the ‘selective utilisation scenario’. The main contributors in the conservation and selective use scenarios are water supply, flood prevention, tourism and agriculture. Timber revenues play an important role in the deforestation scenario. Compared to deforestation, conservation of the Leuser Ecosystem benefits all categories of stakeholders, except for the elite logging and plantation industry.