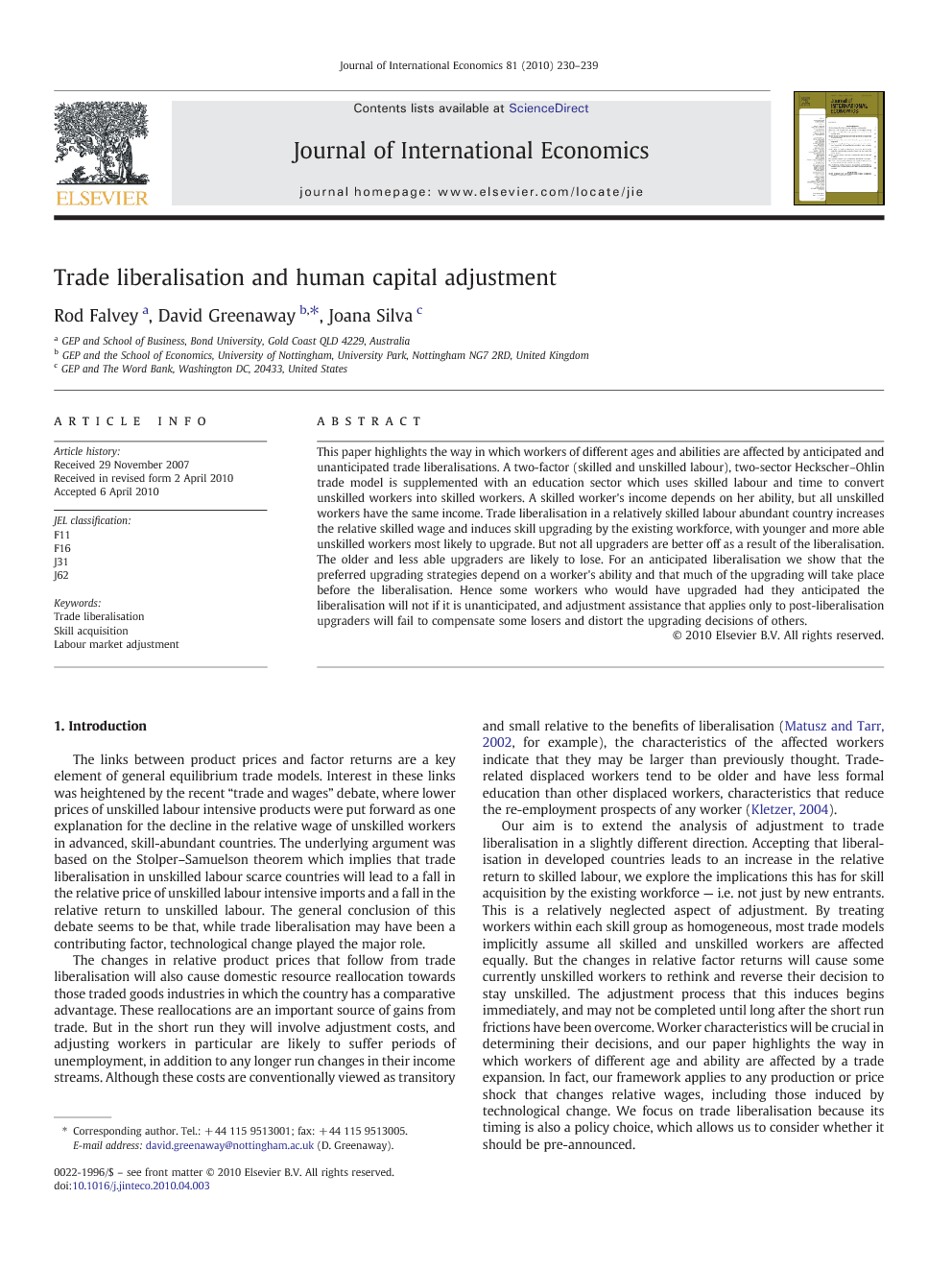 Our aim has been to highlight how the characteristics of unskilled workers, particularly age and ability, affect when and whether they opt for skill upgrading in response to liberalisation in a skill-abundant country. An unanticipated liberalisation will induce those close to the old ability threshold to upgrade. Because the return on upgrading is increasing in ability and decreasing in age, younger, more able workers are more likely to upgrade and older, less able workers to remain unskilled. Not all upgraders are better off. Specifically, for any given ability cohort the youngest workers upgrade and gain, an intermediate range upgrade but lose and the oldest remain unskilled (and lose). The balance among these three groups shifts towards the losers as we consider lower ability cohorts. These results confirm the widespread view that older workers are more likely to lose among the adjusters to liberalisation. A similar pattern applies for an announced liberalisation. The most significant difference is that announcement allows the option of upgrading prior to liberalisation and this option will be preferred by those closest to the pre-liberalisation ability threshold and hence those most likely to upgrade. The implication is that if a liberalisation is anticipated, much of the adjustment - or indeed all of it if the liberalisation is small enough - will take place in advance. This has implications for both empirical measurement of adjustment and the design of programs of adjustment assistance. Neither of these should be restricted to the post-liberalisation period. Whether anticipated or not, any adjustment to a trade liberalisation via upgrading is a dynamic process that may take much longer than suggested by conventional analysis. Until the new steady state is achieved (i.e. as long as the workforce contains individuals who entered prior to liberalisation or its announcement), the supply of skilled (unskilled) labour in a skill-abundant country will be below (above) its long run level. While in no way intending to offer a detailed analysis of adjustment assistance, our results suggest two important considerations for program design. First, some upgraders (adjusters) are gainers and some losers. There would seem to be little argument for compensating the former. Second, if liberalisation is anticipated, some adjustment optimally will occur beforehand. A similar outcome has been shown for intersectoral worker movements by Artuc et al. (2008). Hence a program of adjustment assistance that provides subsidies to adjustment costs, but only after the liberalisation has occurred, will distort the timing of adjustment away from its optimal path. There are several directions in which this work might usefully be extended. The integration of short run adjustment costs would allow a more comprehensive consideration of adjustment assistance. Not all upgrading occurs via formal schooling. On-the-job training is an important alternative, often for skills that are firm or industry specific. Investigation of the effects of liberalisation on demand for and supply of these types of skills requires a different model.27 The range of skills relevant to the labour market and different channels through which they can be acquired (from formal schooling to experience) make empirical investigation difficult. Further complexity is added by potential capital market distortions and the role of governments financing and provision of training. But the growing availability of matched worker-firm data sets suggests progress may soon be possible.