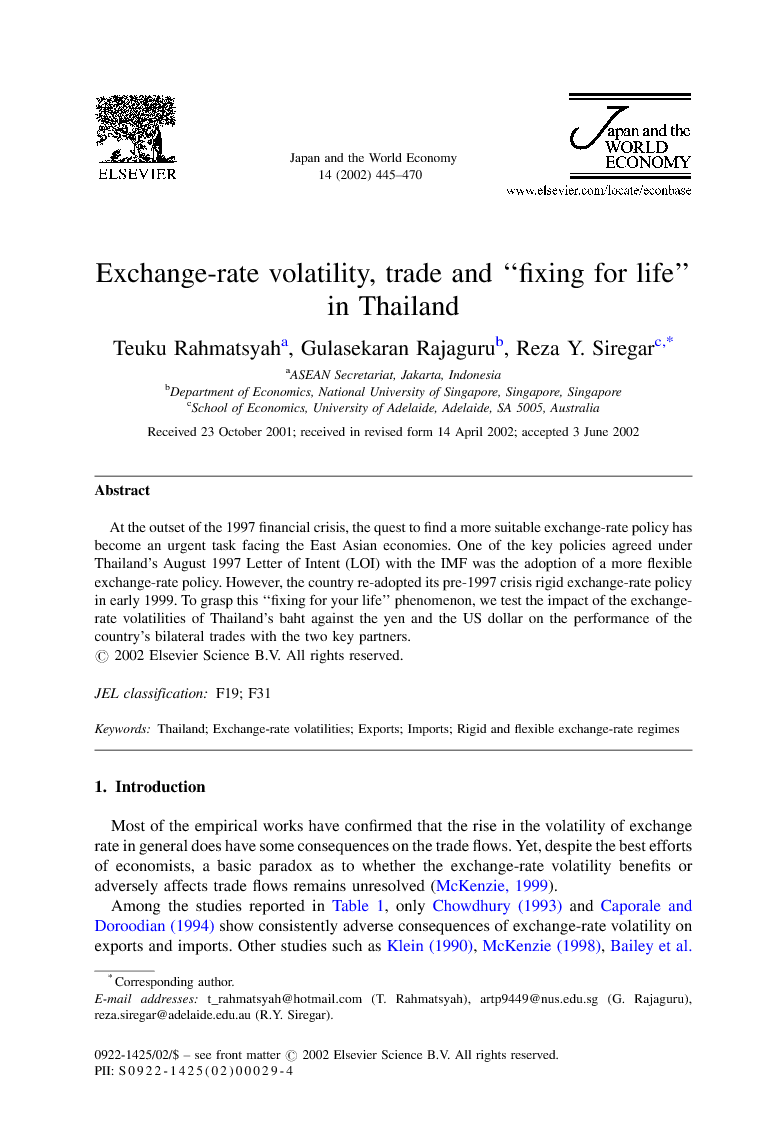 Most of the empirical works have confirmed that the rise in the volatility of exchange rate in general does have some consequences on the trade flows. Yet, despite the best efforts of economists, a basic paradox as to whether the exchange-rate volatility benefits or adversely affects trade flows remains unresolved (McKenzie, 1999). Among the studies reported in Table 1, only Chowdhury (1993) and Caporale and Doroodian (1994) show consistently adverse consequences of exchange-rate volatility on exports and imports. Other studies such as Klein (1990), McKenzie (1998), Bailey et al. (1987), Koray and Lastrapes (1989), Asseery and Peel (1991), Kroner and Lastrapes (1993), McKenzie and Brooks (1997), McKenzie (1998), Daly (1998), Wei (1998) and Chou (2000) have found cases where a rise in exchange-rate volatilities may have both positive and negative implications on exports and imports. As far as the rest of studies listed in Table 1, we observe few cases where exchange-rate volatility plays an insignificant role in explaining exports and imports. This includes a most recent study by Aristotelous (2001) that finds the exchange-rate volatility does not have any effect on the performance of the British exports to the United States during the period of 1889–1999.1Given the nature of their economic developments and levels of economic openness, it was the developed countries that immediately had to face the new uncertainties associated with higher exchange-rate volatilities of a more flexible regime during the early part the post-Bretton Woods system. This partly explains as to why, since early 1970s, most of the empirical debates around the role of exchange-rate uncertainty have centered on the experiences of developed economies in western Europe and North America (Table 1). However, at the outset of the 1997 financial crisis in East Asia, the quest to find a more suitable exchange-rate policy has also become an urgent policy challenge facing the East Asian economies. Letter of Intents (LOIs) signed between the International Monetary Fund with the crisis-effected economies such as Thailand and Indonesia have specified the commitment of these economies to shift their exchange regimes to a more flexible one. In its LOI dated 14 August 1997, the government of Thailand has expressed its new policy to: … allow the (nominal exchange) rate to adjust flexibly and we will not seek to defend any particular rate in the face of sustained market pressures.2 In its recent advice to help China to integrate further into the world economy and promote structural changes, the IMF has also urged the country to gradually shift its exchange-rate policy to a more flexible regime. IMF encourages “full use” of the trading band. This then should be followed by a gradual widening of the band and its linkages to a basket of currencies. At the moment, China’s currency is US-dollar linked, and trades at around 8.28 to the greenback. (The Business Times, Singapore, 27 August 2001) McKinnon (2001) has warned however that the “old habit” of keeping a rigid exchange-rate policy remains to be popular in most East Asian economies. The study shows that East Asian developing countries have pegged their currencies to the US dollar for more than a decade before the break of the 1997 financial crisis. Some of these economies had temporarily relaxed their rigid policy against the US dollar during the period immediately after the break of the 1997 crisis (from June 1997 to December 1998). However, driven by the needs to stabilize their national currencies and to shield the local markets from the volatilities of the foreign exchange market, the soft-dollar pegged has once again become the exchange-rate regime of the East Asian economies since 1999. Calvo and Reinhart, 2000a and Calvo and Reinhart, 2000b argue that there is a “fear of floating” among developing economies. During January 1983 to April 1999, their study shows that the probability that the monthly percentage change of nominal exchange rates of selected East Asian currencies against the US dollar falls within ±1 percent band and ±2.5 percent band was in average above 96 percent, except for Philippines and Singapore with a probability of 75 and 89 percent, respectively. Those two studies have also indicated that adverse consequences of exchange-rate volatilities on trade and inflation are found to be more damaging to the emerging market economies than developed economies. Therefore, the developing economies (such as the East Asian countries) are more reluctant to tolerate large exchange-rate movements—by adopting a more flexible exchange-rate policy and abandoning the soft-US dollar-pegged policy. Especially, since a large share of the total trade of the East Asia economies with the world markets is denominated in the US dollar (McKinnon, 2001 and Calvo and Reinhart, 2000b). It is important to note here however that hardly any sufficient empirical works have been prepared by Calvo and Reinhart, 2000a and Calvo and Reinhart, 2000b to support their conclusions on the damaging role of exchange-rate volatility on trade in the East Asian economies. In fact their conclusions are based on other studies, which have not in general focused on the East Asian countries.3 To partly fill in this void, our study offers some empirical evidences to help explain the fear of floating and fixing for life phenomena in Thailand. The paper hopes to address two related questions. “Had there been any significant evidences of adverse consequences of the baht’s exchange-rate volatilities on exports and imports of Thailand with its most important trading partners: Japan and the US?” More importantly, “had the impacts been favorable or harmful for the trade sectors?” While most studies only provide one measure of exchange-rate volatility, we construct two sets of nominal and real exchange-rate volatility, applying the most commonly used measurements.4 Unlike most of early studies in Table 1, having more than one measurement of exchange-rate volatility allows us to verify the robustness of our regression results. The remainder of this paper will be organized as follows. Section 2 briefly reviews selected relevant stylized facts in Thailand. Section 3 introduces working models for both export and import-demand functions. The measurements of volatilities will also be presented here. Data and test results are discussed in Section 4. Brief concluding remarks end the paper.

The objective of our paper is to investigate the impact of exchange-rate volatility on the volume of exports and imports of Thailand with the US and the Japanese markets. While most of early studies have only used one measurement of exchange-rate volatility (Table 1), we constructed four indices of volatility rates using the two commonly used measurements. This allows us to confirm the robustness of our findings. Our empirical works have shown conclusively that the rise in exchange-rate volatility had adverse consequences on both exports and imports of Thailand with the Japanese market, and the imports of Thailand from the US during the period of two decades before the break of the 1997 East Asian financial crisis. Less conclusive evidences were however found on the impact of exchange-rate volatility for the performance of the Thailand’s exports to the US market. Recent estimates have shown that the real effective exchange-rate volatilities of key southeast Asian currencies, including baht, have increased dramatically during the first year of the 1997 financial crisis (Table 11). At the same time, we find both exports and imports in 1998 have gone down as compared to their 1996 levels. Obviously, one needs to consider various factors to explain the slowdowns in both exports and imports of Thailand in 1998. However, given the pre-crisis evidence, we can also argue that the rise in the volatilities is likely to have partly contributed to the declines in trade numbers.Previous studies have suggested that the development of markets for various hedging instrument is indispensable to alleviate the adverse consequences of the rise in the volatilities (for instance Viaene and Vries (1992)). However, our results for Thailand have shown that hedging facilities may be a necessary but certainly not a sufficient condition. Despite the availability of forward instruments and other hedging instruments in Thailand (Wilson et al., 1996), the use of these instruments by domestic exporters and importers are limited. Calvo and Reinhart, 2000a and Calvo and Reinhart, 2000b argue that most of the future markets in the emerging markets are illiquid. One explanation for the illiquid markets is high-risk premium associated with them, reflected by the persistently high domestic interest rate (Rajan et al., 2001). This high-risk premium, which is translated into a high cost of hedging, has been one of the key factors explaining the limited use of hedging instruments in Thailand and other main southeast Asian countries. Consequently, the limited used of the forward market instruments failed to shield trade sectors in Thailand from experiencing the adverse impacts of the exchange-rate volatility. As mentioned in the introduction, with the break of the worst financial crisis in the past decades in 1997, most of the southeast Asian economies, including Thailand, are forced to abandon their rigid exchange-rate regimes. The unprecedented swings and instabilities in the regional currencies have however regenerated efforts by these countries to re-adopt the rigid US dollar-pegged regime. McKinnon (2001) has shown that the weight that the US dollar has in explaining the fluctuations of the southeast Asian currencies has returned to its pre-1997 crisis in early 1999. Should Thailand be encouraged to go back to the US-pegged system? Based on the results posted in Table 7, Table 8, Table 9 and Table 10, the answer is “no.” Given the adverse consequences of high volatilities and the significant share of Thailand’s trades with the Japanese market in the country’s overall trade, the cost of the pegged US dollar system may not outweigh its benefits.21Rajan et al. (2000) have also shown the US-pegged system has been largely responsible for the real exchange-rate misalignments of the baht against the Japanese yen. In turn, the misaligned baht partly contributed to substantial trade deficits that Thailand had with Japan in 1990s. Consistent with our discussions, the recent IMF report on exchange-rate regime has rightly cautioned that There is an important danger, however, in slipping back into de facto pegging of exchange rates against the US dollar. While this may be sustainable for some considerable period, this may well eventually contribute to recreating the problems that led up to the Asian crisis. (Mussa et al., 2000, p. 59)