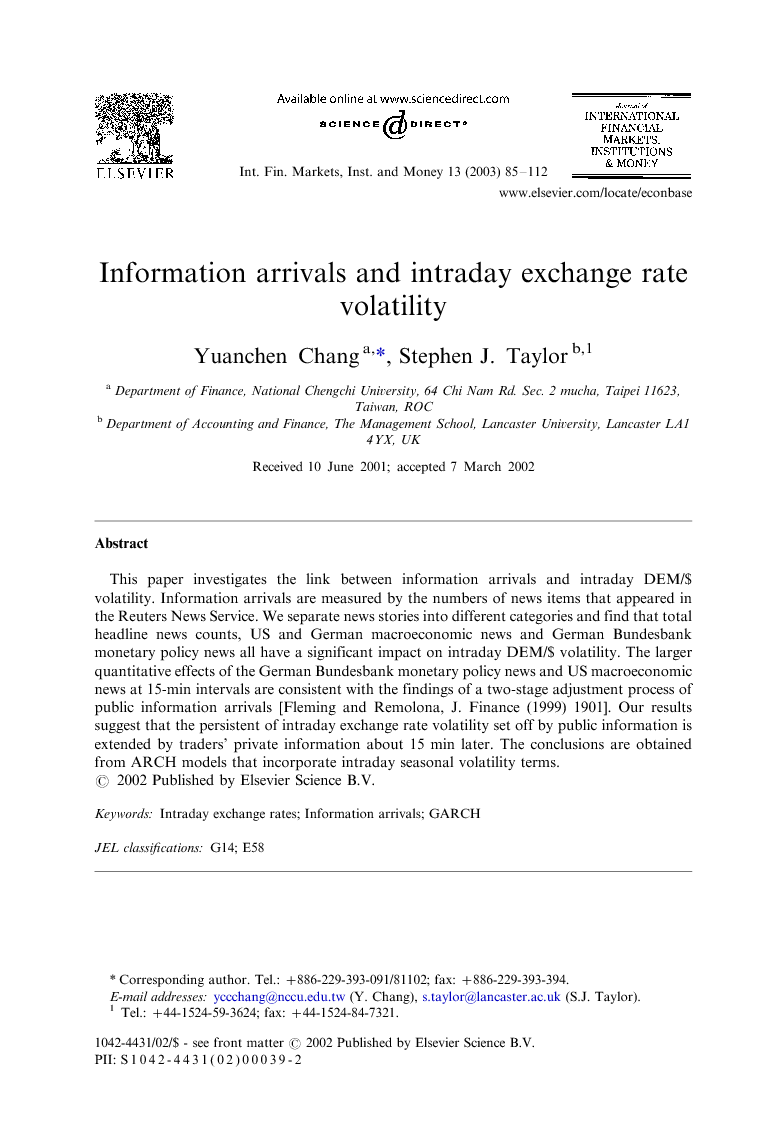 This paper investigates the link between information arrivals and intraday DEM/$ volatility. Information arrivals are measured by the numbers of news items that appeared in the Reuters News Service. We separate news stories into different categories and find that total headline news counts, US and German macroeconomic news and German Bundesbank monetary policy news all have a significant impact on intraday DEM/$ volatility. The larger quantitative effects of the German Bundesbank monetary policy news and US macroeconomic news at 15-min intervals are consistent with the findings of a two-stage adjustment process of public information arrivals [Fleming and Remolona, J. Finance (1999) 1901]. Our results suggest that the persistent of intraday exchange rate volatility set off by public information is extended by traders’ private information about 15 min later. The conclusions are obtained from ARCH models that incorporate intraday seasonal volatility terms.

The link between information arrivals and the variation of asset prices is an important issue in finance. Mitchell and Mulherin (1994) use daily news numbers, reported by Dow Jones on the Broadtape, to examine the link between news arrivals and stock prices. Their results show that there is a significant relationship between information arrivals and trading volumes, but only a weak link with stock returns. Berry and Howe (1994) count the numbers of news items released by Reuters News Service as their information proxies, which include not only political but also economic announcements circulated by major news vendors. They find a positive relationship between information arrival and trading volume, but an insignificant relationship with stock price volatility. This paper contributes to the accumulating empirical literature addressing similar issues using exchange rate data. There is already an extensive literature that focuses on currency volatility using ARCH related models (Hsieh, 1988, Gallant et al., 1991 and Bollerslev et al., 1992). These studies show that ARCH models can capture the clustering of volatility seen in time series of exchange rates. One explanation for time-varying conditional variance is that returns are generated by a mixture of distributions, in which information arrivals are the mixing variables (Diebold, 1986, Taylor, 1986, Lamoureux and Lastrapes, 1990, Gallant et al., 1991, Goodhart et al., 1993 and Bollerslev and Domowitz, 1993). These studies have suggested that autocorrelation in information arrivals leads to the serial dependency in conditional volatility that is captured by the ARCH model. Since mixing variables are generally unobservable, proxies of information arrivals have been used in the literature. Lamoureux and Lastrapes (1990) choose transaction volume as their information proxy. Locke and Sayers (1993) test a series of information proxies such as volume, floor transactions, number of price changes and executed order imbalance on S&P-500 futures contracts. They find some evidence of remaining variance persistence regardless of the definition of the rate of information proxy. Goodhart et al. (1993) use dummy variables to test the effect of US trade figure and UK base rate changes on tick by tick Dollar–Sterling exchange rates. They find these news variables have a significant effect on volatility changes and including them in the conditional variance equation reduces the variance persistence. Bollerslev and Domowitz (1993) test other intraday information proxies such as quote frequency and changes in the bid-ask spread. Their results show that conditional volatility is increasing in the size of the spread, but quote frequency has a negligible effect on conditional volatility. Moreover, including an information proxy did not change many of the other parameters of the GARCH (1, 1) specification. Our interpretation of information arrivals parallels that used in independent work by Low and Muthuswamy, 1995 and Melvin and Yin, 2000. Low and Muthuswamy use the number of news items reported in Reuters News pages as information proxies and discuss the relationship between these variables and DEM/$ and JPY/$ intraday volatility. However, they do not adjust for intraday volatility seasonality which could influence their results. Melvin and Yin (2000) study the relationship between news and exchange rate volatility from December 1993 to April 1995. Their results show that the volatility of the DEM/$ exchange rate varies positively with the total number of news items reported in Reuters News Service. They use a similar seasonal adjustment process to that employed in this paper and their results are based on estimating GARCH models with conditional normal distributions from hourly data. In this paper, we also consider fat-tailed distributions, the impact of different categories of information, higher data frequencies and the adjustment of GMT times during daylight saving periods. DeGennaro and Shrieves (1997) use key words concerning the status of US–Japan trade negotiations, interest rate changes, and economic policy to investigate the impact of information arrivals on JPY/$ volatility. They use hourly return data and adjust for intraday seasonality by including the rate of quote arrivals in the conditional variance equation. Ederington and Lee, 1993 and Ederington and Lee, 1995 use intraday futures exchange rate data to show the significant impact of macroeconomic news on intraday exchange rate volatility. Payne (1996) discusses the impact of US macroeconomic news announcement on the DEM/$ exchange rate using a stochastic volatility model. Fleming and Remolona (1999) uncover a two-stage adjustment process in the US. Treasury market around the release times of major US macroeconomic announcements. They find that the first stage is marked by a sharp and nearly instantaneous price change to public information. In a prolonged second stage, price volatility persists as investors trade to reconcile residual differences in their private views based on the knowledge of their customer order flows. Given the intraday exchange rate data and news items supplied to us by Olsen and Associates (O&A), it is of interest to assess the impact of various categories of economic news on intraday DEM/$ exchange rates. The most comprehensive information proxy, we have used is the total number of news items reported per period by the Reuters News Service. In addition, we also consider four subsets of the report to assess their individual impact on intraday DEM/$ exchange rate volatility. They are news related to US macroeconomic variables, news related to German macroeconomic variables, and news related to the monetary policy instruments of the US Federal Reserve and the German Bundesbank. The remainder of the paper is arranged as follows, Section 2 describes the data and intraday seasonal multipliers. Section 3 discusses the categories of news arrivals and Section 4 describes the ARCH methodology. Section 5 provides results. Conclusions are summarized in Section 6.

The purpose of this paper is to improve our understanding of the relationship between news arrivals and intraday exchange rate volatility. The relevance of the sample period stems from the fact that European currency markets were in turmoil during this period. Therefore, our paper provides important documentation of the relationship between public information arrivals and exchange rate volatility during the 1992–1993 currency crisis. Our analysis is closely related to that of Berry and Howe, 1994 and Mitchell and Mulherin, 1994. We extend their studies by considering the impact of public information on the exchange rate market. Further, we put events into categories by countries and types of news, and discuss their individual impact on volatility. ARCH models show that total headline news counts have a significant impact on exchange rate volatility at 5-min intervals. However, including the total news counts in the variance equation only changed the other parameters of the GARCH model by small amounts. This indicates that total news counts alone can not explain the volatility clustering of DEM/$ intraday exchange rates. This is consistent with the results of Melvin and Yin (2000). The total news counts, although it measures some less relevant reports, is the most comprehensive news variable available. The results show that the quantitative impacts of the total news counts are less than those of US and German economic news; therefore, it is essential to extract major economic news items from these headlines to evaluate their individual economic importance. It has been shown that both US and German macroeconomic news also have a significant impact on DEM/$ volatility at high frequencies and this can be compared with the related studies of Ederington and Lee, 1993 and Ederington and Lee, 1995 that investigate volatility and the timing of macroeconomic announcements. Our results suggest that DEM/$ volatility has a symmetric response to macroeconomic announcements from the US and Germany. The impact of the monetary policy news of the German Bundesbank and the US Federal Reserve are different during the sample period. It is seen that German Bundesbank news is significant for 15, 10 and 5-min intervals at the 5% level and its parameter estimates are much larger than those of the other news categories. Thus, the economic impact on the DEM/$ volatility of German Bundesbank news is the largest which indicates that the focus of the exchange rate market was on the monetary policies of the German Bundesbank during the sample period. There is an interesting question of market efficiency related to the times of information arrival. Though our sample frequencies do not allow us to investigate the instantaneous price reactions to public information, we find that the largest quantitative effects of the German Bundesbank monetary policy news and US macroeconomic news occur at 15-min intervals. These results are consistent with the findings of a two-stage adjustment process of public information arrivals (Fleming and Remolona, 1999). The persistence of intraday exchange rate volatility set off by public information is extended by traders’ private information about 15 min later. US Federal Reserve news has a negative and significant effect on the DEM/$ volatility at 15 and 10-min intervals. There were news reports that the Federal Reserve adopted a steady monetary policy during the sample period. News related to the US Federal Reserve seems to gradually confirm its steady monetary policy so that the DEM/$ volatility decreased when these reports appeared on Reuters’ screen. It would be interesting to compare the impact of Federal Reserve news over different sample periods.