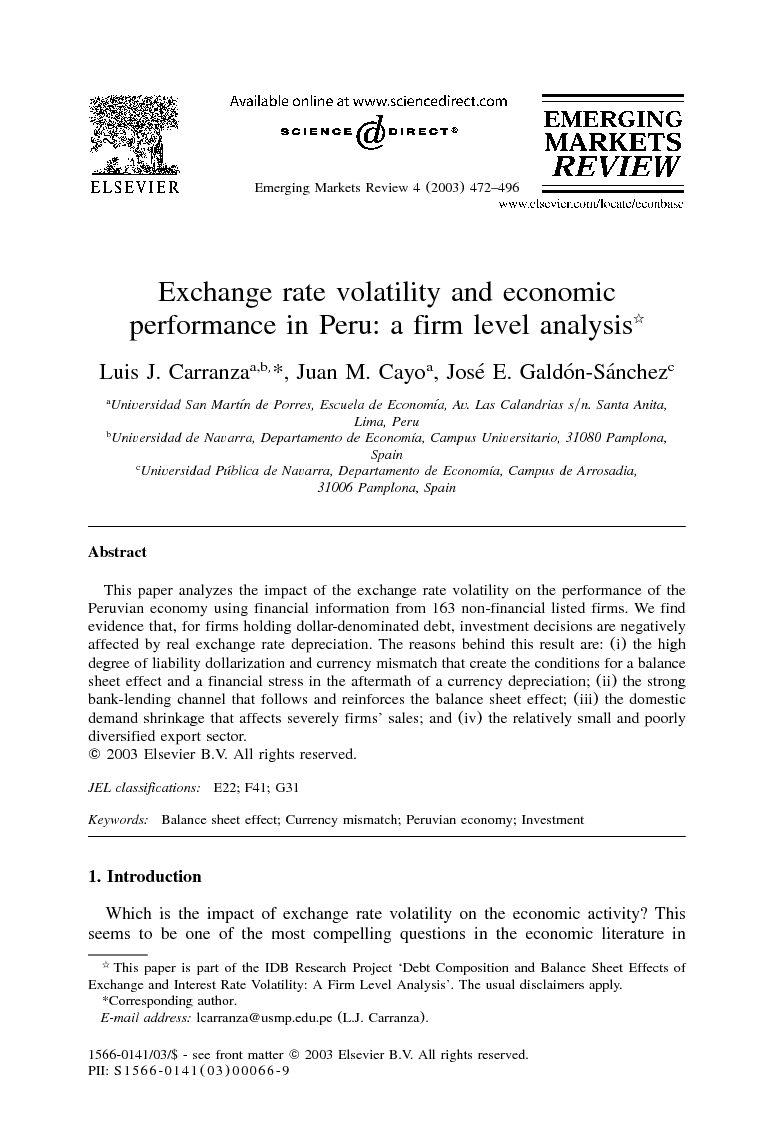 This paper analyzes the impact of the exchange rate volatility on the performance of the Peruvian economy using financial information from 163 non-financial listed firms. We find evidence that, for firms holding dollar-denominated debt, investment decisions are negatively affected by real exchange rate depreciation. The reasons behind this result are: (i) the high degree of liability dollarization and currency mismatch that create the conditions for a balance sheet effect and a financial stress in the aftermath of a currency depreciation; (ii) the strong bank-lending channel that follows and reinforces the balance sheet effect; (iii) the domestic demand shrinkage that affects severely firms’ sales; and (iv) the relatively small and poorly diversified export sector.

In this paper we find evidence that currency depreciation negatively affected the firms’ investing behavior in the Peruvian economy between the years 1994 and 2001. In particular, we find evidence of a negative balance sheet effect that arise from three channels: (i) the interaction effect of dollar denominated debt times the real exchange rate depreciation; (ii) the fact that firms with higher dollar debt ratios tend to invest less; and (iii) the effect of the real exchange rate depreciation by itself. However, we find no evidence of a significant ‘competitiveness effect’, as both the exports and tradability seem to play no role in the investment behavior. Finally, we find support for a bank-lending channel hypothesis that underpins the balance sheet effect, given the following results: (i) the positive effect of total leverage ratio; (ii) the Diamond-like signaling element of short term debt ratio; and (iii) the fact that firms’ investing behavior is closely related to cash flow projections. Our findings contradict the results of Bleakley and Cowan (2002) as they found that the balance sheet effect is positive. They argue that firms with higher participation in the tradable sector are more likely to hold debt denominated in foreign currency. On the contrary, the high degree of liability dollarization and currency mismatch observed in the Peruvian economy would have created the conditions for the existence of a negative balance sheet effect and the financial stress that took place in the aftermath of the currency depreciation episodes of the late 1990s. If we take into account the financial constraints that reinforce the balance sheet effect, we can understand the economic forces behind our findings. What are the main lessons of this exercise from the policymaking point of view? As precautionary measures, the government should pursue structural reforms seeking to increase the degree of openness of the real sector, which effectively reduces the currency mismatch at the macroeconomic level. At the same time, market-friendly strategy aiming at the dedollarization of the economy should be followed. This strategy should be based on fostering internal savings in domestic currency (i.e. issuing inflation-indexed government bonds as a saving instrument) and on pricing in the negative externality of foreign currency indebtedness (i.e. increasing general banks’ provisions for loans in foreign currency to non-export firms). What should be done in the aftermath of a crisis? It is clear that monetary policy should be as prudent as possible, taking into account that a period of banking illiquidity should be faced by the central bank. The central bank should be prompt to avoid severe banking liquidity droughts via flexible dollar reserve requirements. However, domestic interest rates can go as high as needed to fight speculative attacks against the currency without any significant impact on the real sector, as long as the short-term debt in domestic currency is rather small. Regarding fiscal policy, it can be countercyclical if public sector financial needs can be healthy funded, otherwise it could be another source of instability through deterioration of credibility and higher country-risk perception.