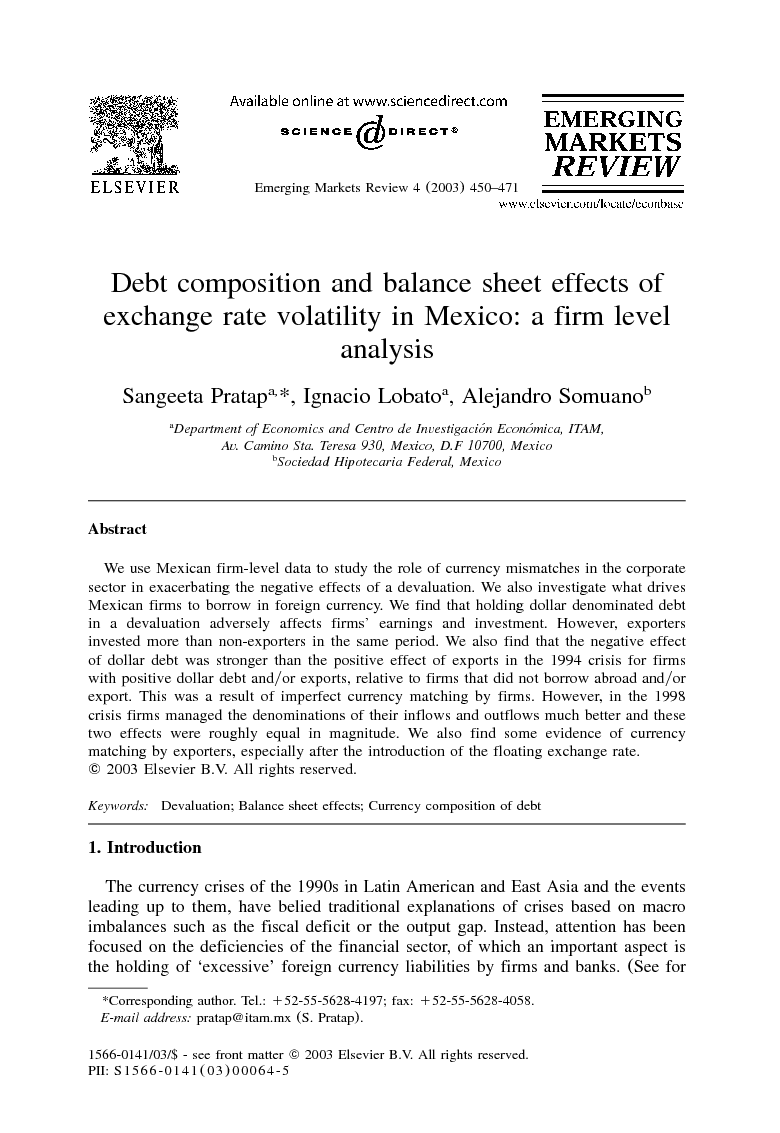 We use Mexican firm-level data to study the role of currency mismatches in the corporate sector in exacerbating the negative effects of a devaluation. We also investigate what drives Mexican firms to borrow in foreign currency. We find that holding dollar denominated debt in a devaluation adversely affects firms’ earnings and investment. However, exporters invested more than non-exporters in the same period. We also find that the negative effect of dollar debt was stronger than the positive effect of exports in the 1994 crisis for firms with positive dollar debt and/or exports, relative to firms that did not borrow abroad and/or export. This was a result of imperfect currency matching by firms. However, in the 1998 crisis firms managed the denominations of their inflows and outflows much better and these two effects were roughly equal in magnitude. We also find some evidence of currency matching by exporters, especially after the introduction of the floating exchange rate.

The currency crises of the 1990s in Latin American and East Asia and the events leading up to them, have belied traditional explanations of crises based on macro imbalances such as the fiscal deficit or the output gap. Instead, attention has been focused on the deficiencies of the financial sector, of which an important aspect is the holding of ‘excessive’ foreign currency liabilities by firms and banks. (See for example, Mishkin, 1996, Goldstein et al., 2000, Kaminsky and Reinhart, 2000 and Harvey and Roper, 1999). Developments in the theoretical literature have emphasized the currency mismatch between inflows and expenditures at the micro level as a mechanism for the propagation of currency crises. Krugman (1999) argues that a devaluation triggers a negative shock to the net worth of firms that have borrowed heavily in foreign currency. This is amplified by capital market imperfections that reduces firms’ access to external funds when balance sheets are weak, i.e. an open economy version of the ‘Bernanke–Gertler’ effect (Bernanke and Gertler, 1989). While devaluation improves the financial situation of exporting firms —the competitiveness effect—, this effect is offset by the mismatch between foreign-currency liabilities and assets denominated in local currency, increasing indebtedness of firms with dollar denominated debt —net-worth effect. In this paper we study the effects of two major devaluations on firm investment in Mexico. We use a panel of firm level data between 1990 and 1999 from the Mexican stock market and we seek an answer to the following questions: (i) Is there any evidence of a balance sheet effect of exchange rate depreciations through the holding of dollar debt on firm investment; (ii) Is there any evidence that exporters experienced a competitiveness effect due to the devaluations, that is reflected in their earnings and investment1; (iii) What determines whether and how much a firm borrows in foreign currency. In particular, we focus on two devaluations, those of 1994–1995, when the nominal exchange rate fell by 44% and 1998 when it fell by approximately 12.5%. Recent empirical work in this area has produced mixed results. Bleakley and Cowan (2002) investigate the effect of holding foreign-currency-denominated debt on investment during an exchange rate realignment. Using a database of over 500 non-financial firms in 5 Latin American countries, including Mexico, they find that the effect of a devaluation on investment is consistently positive. However, they do not have information on firm level exports, and if firms match currency flows of exports and debt repayments, the positive effect that they find may be due to an omitted variable bias. Aguiar (2002) looks at the immediate effect of the crisis on investment and currency composition of debt in 1995 in Mexico. He finds that investment was positively related to net worth, which in turn was adversely affected by the holding of dollar debt in this year. He also finds that exporting firms borrowed mostly in foreign currency, and while their profits and sales increased after the devaluation, they were constrained by weak balance sheets. He therefore finds limited evidence of a competitiveness effect. However, the time period on which this study focuses is limited to the 1994–1995 and is not able to account for firm heterogeneity. He also does not study the effects of the 1998 devaluation, which were somewhat different from 1994. Forbes (2002) also addresses the Mexican experience, although for a different period. Using a sample of over 13500 firms from 42 countries that includes Mexico, she examines the impact of 12 major depreciations between 1997 and 2000. Her results suggest that in the year after depreciations, firms have significantly higher growth in market capitalization (measured in local currency or US dollars), but significantly lower growth in net income (measured in local currency). Firms with greater foreign sales exposure have significantly better performance. Firms with higher debt ratios tend to have lower net income growth after devaluations, but there is no robust relationship between debt levels and other performance variables. In order to better comprehend the overall effects of a devaluation at the firm level it is important to understand why domestic firms borrow in foreign currency in the first place. Economic theory suggests that this can be explained through hedging exchange rate risk. However, as we shall see later, one feature of the Mexican data is that firms were very imperfectly hedged before the 1994 crisis. Caballero and Krishnamurthy (2001) set up a model where the general equilibrium effects of liquidity constraints drive a wedge between the marginal product of capital and interest rates, and induce firms to borrow disproportionately in foreign currency. In an empirical analysis, Martinez and Werner (2002) suggest that the decision of borrowing in pesos or dollars highly depends on the exchange rate regime, due the implicit guarantees given by the government under a fixed exchange regime. We find that the effect of holding dollar debt on investment during episodes of exchange rate devaluation is strong and negative. Dollar debt holding also affected earnings adversely throughout the period, with an additional negative impact in times of exchange rate depreciation. While exporters invest less than non-exporters in general, their investment is higher in devaluationary episodes. They also have higher total earnings. We also find that exporters and large firms tend to borrow more heavily in foreign currency. The remainder of the paper is organized as follows. Section 2 provides a brief description of events leading up to the 1994 and 1998 devaluations. Section 3 describes the data used in the empirical analysis. Section 4 presents the equations to be estimated, the empirical methods utilized and the results we obtain. Finally, Section 5 concludes.

Recent crises have highlighted the role of foreign currency debt in propagating negative shocks to the exchange rate. This has naturally led to an interest in the micro determinants of dollar debt and its effect on investment, particularly during devaluations. This paper provides some empirical evidence for the Mexican experience in the last decade. Our main findings are as follows: Large firms and export-oriented firms in the tradable sector tend to borrow more heavily in foreign currency. The presence of foreign currency debt poses a significant risk to balance sheets at the time of devaluation. In standard investment equations we find that foreign debt as well as the interaction of foreign debt with changes in exchange rates are negatively related with investment. The other interesting finding is that depreciations induce exporters to invest, i.e. we have some evidence of a competitiveness effect. However, in general, exports are negatively correlated with investment, possibly due to the greater volatility in the environment that they face. Another interesting result is that in the years leading to the crises, firms positioned themselves in ways that rendered them particularly vulnerable to the adverse effects of a devaluation. Firms with high amounts of dollar denominated liabilities and exports invested substantially before the crisis. These were also the firms most affected by the exchange rate shock, as is reflected in their investment performance. We also quantify the effects of devaluations on firm investment through the channels of exports and dollar debt. We cannot quantify the total effects of a devaluation but we find that, relative to firms with no dollar debt and exports, the effect of the 1994 devaluation on investment through exports and dollar debt was significantly negative due to a combination of inadequate hedging and a sharp depreciation of the exchange rate. In contrast, the 1998 devaluation, which was substantially smaller, had a more modest effect on investment due to better hedging