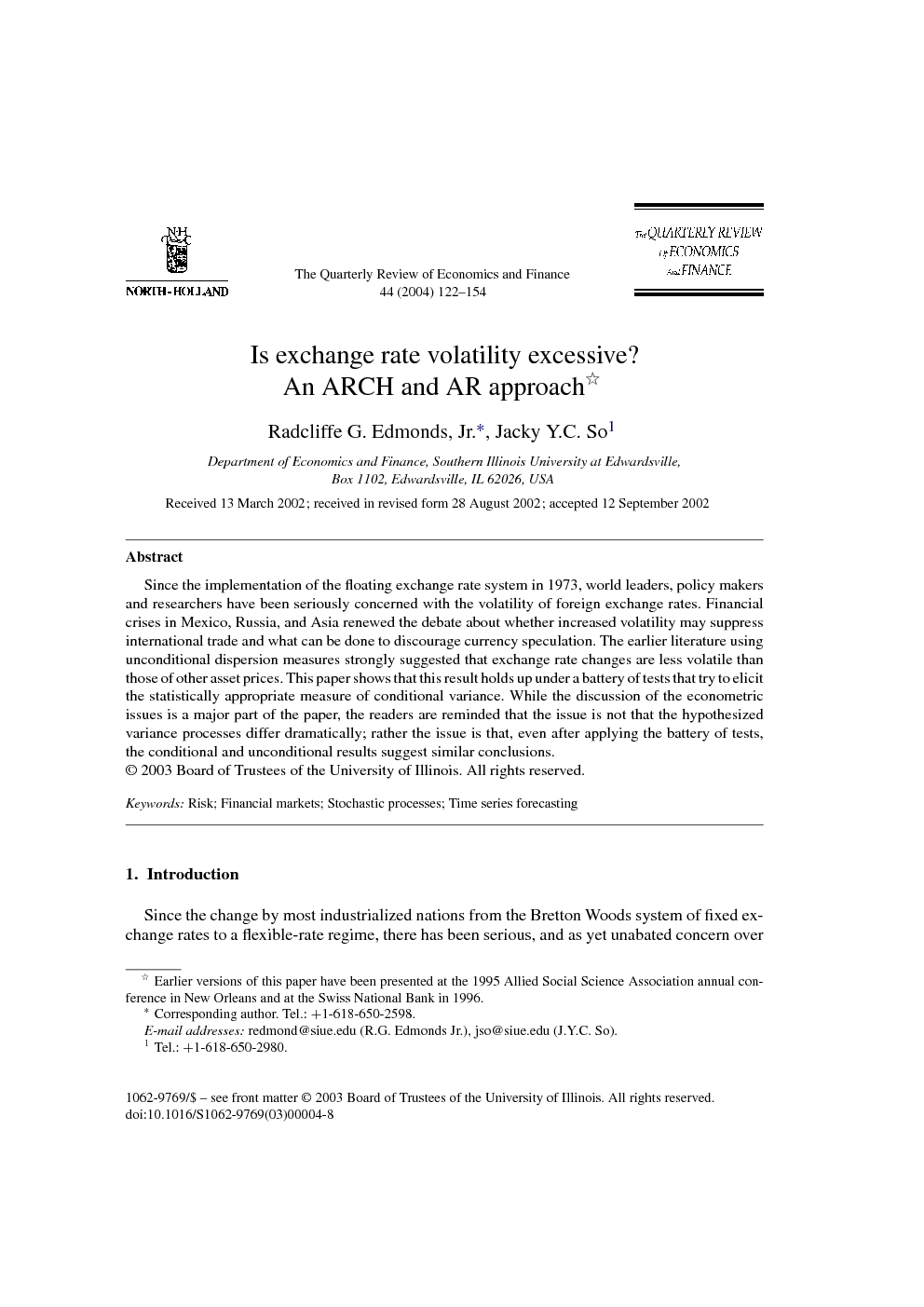 Since the implementation of the floating exchange rate system in 1973, world leaders, policy makers and researchers have been seriously concerned with the volatility of foreign exchange rates. Financial crises in Mexico, Russia, and Asia renewed the debate about whether increased volatility may suppress international trade and what can be done to discourage currency speculation. The earlier literature using unconditional dispersion measures strongly suggested that exchange rate changes are less volatile than those of other asset prices. This paper shows that this result holds up under a battery of tests that try to elicit the statistically appropriate measure of conditional variance. While the discussion of the econometric issues is a major part of the paper, the readers are reminded that the issue is not that the hypothesized variance processes differ dramatically; rather the issue is that, even after applying the battery of tests, the conditional and unconditional results suggest similar conclusions.

This study has examined unconditional and conditional measures of volatility in weekly and monthly series of exchange rates and other asset prices for seven countries. Although in such a broad empirical investigation there are bound to be differences in patterns, at the risk of oversimplification, we can generalize to a few conclusions about our hypotheses of interest. We find both differences and similarities between the conditional volatility of exchange rates and other asset prices. As is clear in Table 5, the conditional volatility of exchange rates (spot-lag) is decidedly less than that of either the “forecast errors” (spot-forward) or the conditional volatility of other asset prices. This mirrors the relationship of the three categories seen in the unconditional measures of Table 1 and Table 2 and in previous work. But the exchange rates, like other asset prices, seem far more likely to be characterized by the ARCH (conditional) variance process in a weekly model than in a monthly one. This difference in variance by model frequency was one of the marked differences between the monthly and weekly series. However, the most striking and important conclusion from this work comes in our investigation of the third hypothesis about the form of asset price distributions. Although conventional tests appeared to indicate an extensive occurrence of both ARCH and AR in the asset price series, use of tests that are robust to distributional misspecification painted a markedly different picture. With the exception of weekly Canadian price data and monthly U.S. asset prices and the precious metals series, these distributions are not characterized by AR processes. The behavior of most, moreover, shows little evidence of autoregressive conditional volatility, with a frequency of significant results nowhere near as high as the conventional tests had suggested. We must conclude that not only is it inappropriate to characterize all price series similarly (as ARCH, or as GARCH, or not), but any that testing to investigate such processes may result in erroneous conclusions unless robust tests are used. We have attempted to seek greater empirical insight into our data series by treating them not as a cross-sectional group of 15-year series, but as a set of individual time series of “news” or “innovations” to the determination of speculative prices. We looked at the exchange-rate series as composed of multiple potentially structurally different models connected either by unknown or by “known” break points defined by macroeconomic events or policy shifts in an approach such as that used by Lastrapes (1989). The decidedly mixed results indicate that there is no simple answer, and that the entire topic needs more work on theoretical and empirical modeling in later research