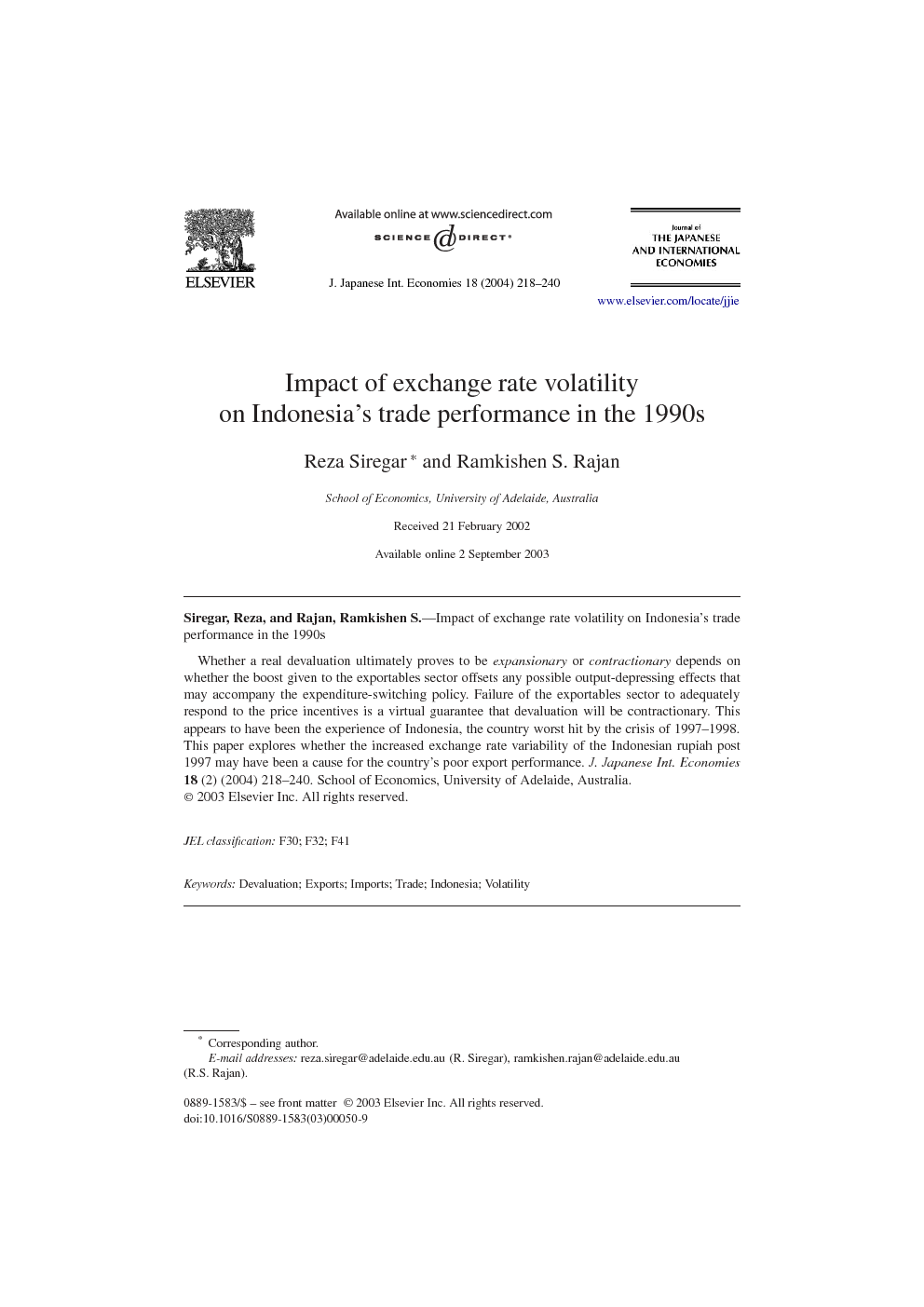 Whether a real devaluation ultimately proves to be expansionary or contractionary depends on whether the boost given to the exportables sector offsets any possible output-depressing effects that may accompany the expenditure-switching policy. Failure of the exportables sector to adequately respond to the price incentives is a virtual guarantee that devaluation will be contractionary. This appears to have been the experience of Indonesia, the country worst hit by the crisis of 1997–1998. This paper explores whether the increased exchange rate variability of the Indonesian rupiah post 1997 may have been a cause for the country's poor export performance. J. Japanese Int. Economies18 (2) (2004) 218–240.

While there are a host of factors that could lead a crisis-induced devaluation (i.e., a devaluation following a currency crisis) to be contractionary, a necessary condition for economic recovery is that exports are boosted. Exports are supposed to be the engine of growth following such an expenditure switching policy. Nonetheless, despite the dramatic decline in the nominal value of the rupiah since mid 1997 (which has in turn been translated into a real devaluation), exports did not show a stable and strong pick up even four years after the break of the crisis; if anything, just the reverse happened. Indeed, the latest developments and outlook for Indonesia's external trade sector for 2002 continue to remain quite bleak (Siregar, 2001). The question we have explored in this paper is whether exchange rate volatility has had any detrimental impact on trade flows in Indonesia during the pre-crisis period. Our observation period has spanned Q2: 1980 to Q2: 1997. We have intentionally excluded the crisis period itself in order to circumvent problems related to structural breaks in the trade series which may be associated with various non-economic factors, like political uncertainty.15 Table 13 summarizes our regression results. Out of twelve regressions undertaken in this paper, nine cases indicate that exchange rate volatility adversely affected exports and imports performance of Indonesia during the pre-crisis period. Extrapolating these results forward, the rise in exchange rate volatilities should have played a critical role in explaining the poor performance of the trade sector in recent years. The adverse impact of exchange rate volatility on trade and the real sector may in part be the reason for the supposed “fear of floating” that has seemed to characterize many emerging economies.16 Recent financial crises involving emerging economies have called into question the wisdom of them adopting pegged exchange rates (be it “hard” or “soft”) and has strengthened the appeal of allowing for greater exchange rate flexibility. However, it is easy to overlook that flexible exchange rates bring with them their own problems. This surely has implications for the perennial issue of appropriate choice of exchange rate regime.