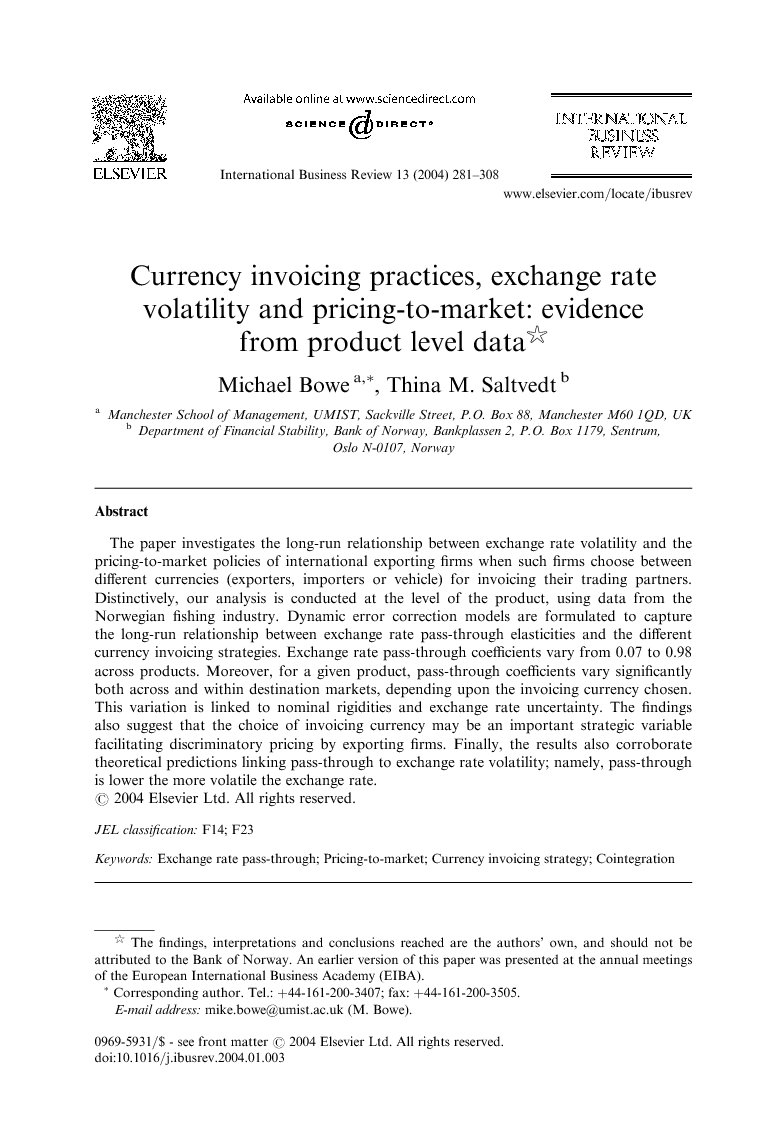 The paper investigates the long-run relationship between exchange rate volatility and the pricing-to-market policies of international exporting firms when such firms choose between different currencies (exporters, importers or vehicle) for invoicing their trading partners. Distinctively, our analysis is conducted at the level of the product, using data from the Norwegian fishing industry. Dynamic error correction models are formulated to capture the long-run relationship between exchange rate pass-through elasticities and the different currency invoicing strategies. Exchange rate pass-through coefficients vary from 0.07 to 0.98 across products. Moreover, for a given product, pass-through coefficients vary significantly both across and within destination markets, depending upon the invoicing currency chosen. This variation is linked to nominal rigidities and exchange rate uncertainty. The findings also suggest that the choice of invoicing currency may be an important strategic variable facilitating discriminatory pricing by exporting firms. Finally, the results also corroborate theoretical predictions linking pass-through to exchange rate volatility; namely, pass-through is lower the more volatile the exchange rate.

This paper investigates the relationship between exchange rate pass-through and the currency invoicing policies of international Norwegian firms when these firms choose between different currencies in which to invoice their exports of fish products. By using a variant of the logarithmic market model (see Hooper & Mann, 1989), we specify a cointegration framework to empirically estimate how the degree of exchange rate pass-through alters in relation to differing invoicing practices of the exporting firms. The dynamic error correction methodology we adopt is much more robust and efficient than single equation approaches to analysing pass-through which are used in the overwhelming majority of previous studies. To our knowledge the product level approach in this paper provides the first empirical estimates relating pass-through to currency invoicing practices available in the literature. There is a clear indication that Norwegian fish exporters possess an ability to set prices, and strong evidence of pricing-to-market behaviour. The degree of pass-through varies by choice of invoicing currency, even for a given product in a given export market destination, implying intra- as well as inter-market price discrimination. This constitutes strong evidence that the choice of invoicing currency is an important strategic pricing decision taken by a firm. The findings corroborate these studies which maintain that exporters effectively price discriminate between markets, and take destination-specific market conditions into consideration when setting prices.23 The results indicate that the pricing-to-market hypothesis is relevant also for exporters from small open economies (Lee, 1997) and suggest that destination market conditions are important in explaining the extent of variation in pricing-to-market practices. Finally, they provide the first evidence in support of theoretical predictions that pass-through is inversely related to exchange rate volatility (Friberg, 1997 and Friberg, 1998).