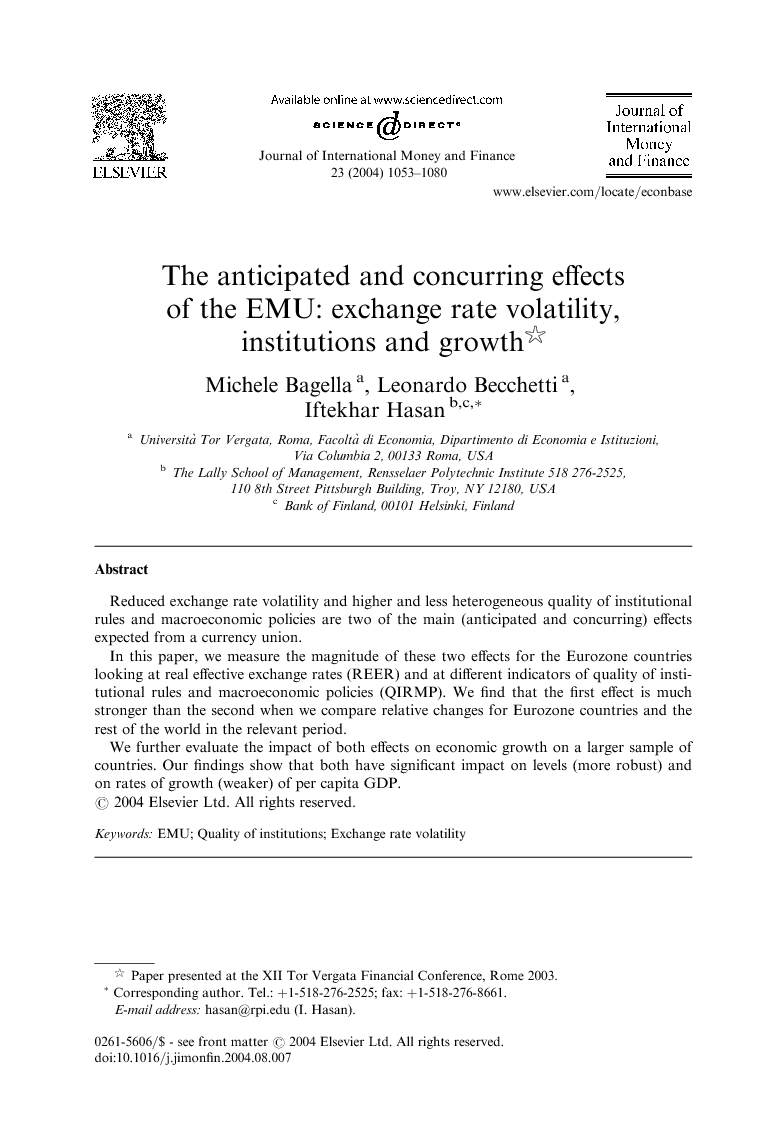 Reduced exchange rate volatility and higher and less heterogeneous quality of institutional rules and macroeconomic policies are two of the main (anticipated and concurring) effects expected from a currency union. In this paper, we measure the magnitude of these two effects for the Eurozone countries looking at real effective exchange rates (REER) and at different indicators of quality of institutional rules and macroeconomic policies (QIRMP). We find that the first effect is much stronger than the second when we compare relative changes for Eurozone countries and the rest of the world in the relevant period. We further evaluate the impact of both effects on economic growth on a larger sample of countries. Our findings show that both have significant impact on levels (more robust) and on rates of growth (weaker) of per capita GDP.

A nice synthesis of the challenges posed by global integration is in the formulation of a well known trilemma (Summers, 1999). The trilemma synthetically expresses the difficulties, or the impossibility, of pursuing at the same time the following three goals—greater economic integration, proper public policy management and national sovereignty—against the possibility of pursuing any of the two at the expenses of the third. The three potential alternatives left for the partial solution of the trilemma are resumed as being those of: (i) “traditional conservative economists” (according to Summers definition) pursuing economic integration and national sovereignty at the expenses of freedom on public policy management; (ii) modern protectionists advocating limits to economic integration to favor “free hands” on public policy management and national sovereignty and, finally, (iii) advocates of Monetary Unions intended as means to promote economic integration and proper public policy management at the expense of national sovereignty (Summers, 1999). In this perspective, the rise of Monetary Unions appears as one of the possible responses to the trilemma which makes compatible the first two goals at the expense of the third. Originally, within the more general approach of the optimal currency areas (Mundell, 1961), one of the most sound economic rationales for the EMU came from the theoretical observation that simple fixed exchange rate parities could not be enough for the partial solution of the trilemma given that, in absence of a common currency, exchange rate stability cannot coexist with divergences in fiscal and monetary policies (Giavazzi and Pagano, 1994 and Obstfeld and Rogoff, 1995). In this framework, a country whose monetary policy is relatively more expansionary than that of the fixed exchange rate partner is likely to suffer from an appreciation of real exchange rates. This appreciation worsens its relative competitiveness and therefore makes necessary a devaluation, thereby generating further currency instability. The awareness of such problems led economists and policymakers in the eighties and nineties to affirm that “fixed exchange rates now seem much less effective as means to price stability than many of us thought before. Therefore, monetary stability and credibility has to be built at home with other means” (Svensson, 1994: p. 467). On the basis of this theoretical pillar, the EU started a process of convergence in fiscal policies, inflation and institutions which was going to prepare the introduction of a common currency. One of the undiscussed advantages of the process leading to the common currency was the elimination of exchange rate volatility among members (Buiter et al., 1998 and Devereux et al., 1999). This was generally considered a beneficial effect given the perception that “unpredictable volatility can inflict damage...[and that]… Although the associated costs have not been quantified rigorously, many economists believe that exchange rate uncertainty reduces international trade, discourages investment and compounds the problems people face in insuring their human capital in incomplete asset markets.” (Obstfeld and Rogoff, 1995). Since exchange rates are a forward looking financial variable whose movements are driven by expectations and anticipate the occurrence of real events, the most, if not all the positive effects of the process of convergence toward the common currency in terms of real exchange rate volatility materialized well before that event.1 This fact may create the illusion that the introduction of the common currency did not generate any benefit. A deeper look at the institutional background may help to illustrate the point of the strict consequentiality between policy and institutional changes promoted by the Maastricht Treaty and the Stability and Growth Pact and the stage of the single currency. From a chronological point of view, consider that, even though the Euro was technically born on December 31, 1998, it had a 8-year gestation which closely followed the time-table and modalities agreed upon in December 1991 in Maastricht (Corsetti-Pesenti, 1999). The Maastricht Treaty, and, subsequently, the Stability and Growth Pact, established prerequisites needed to qualify for MU membership which include complying with the convergence criteria in terms of inflation, fiscal stance and interest rates, as well as appropriate reforms to prepare central banks to be integrated into the new European system.2 More specifically on this point, Gali and Perotti (2003) remember that compliance with budgetary discipline (established by art. 104 of the Treaty) and price stability was among the criteria on which the decision of admission to stage III of the EMU was taken in July 1998. Furthermore, the same EEC rules explicitly exclude the same consequentiality for countries which are not candidates to the Monetary Union. Regulation 1467/97 states that fiscal discipline does not apply to the UK unless it moves to the stage of Monetary Union. Both Denmark and the UK are explicitly exempted from requirements of paragraph 9 and 11 of Art. 104 relative to European Council penalties for countries with deficit exceeding the 3% threshold (Gali and Perotti, 2003). Based on this evidence, it is hard to believe ex post that a process of institutional and monetary and fiscal policy convergence would have occurred without the final goal of the MU. This is why we argue in this paper that the likely benefits of a common currency must be evaluated starting from the beginning of the convergence process leading to the Euro. Our approach for measuring them is in two steps. In the first, we compare real effective exchange rate volatility and level and variance of QIRMP between Eurozone members and other representative groups of countries before and after the currency union. In the second, we evaluate the impact of these variables on economic growth. The paper is divided into six sections (including Introduction and Conclusions). In the second section, we shortly illustrate theoretical and empirical arguments of the literature on the relationship between exchange rate volatility and growth. In the third section, we describe the approach followed to build a real effective exchange rate (REER) risk indicators in order to measure the effects of convergence toward the Euro on exchange rate volatility. In the fourth and fifth section, we respectively describe our econometric specification and present findings which evaluate the statistical and economic impact of REER volatility and of quality of institutional rules and macroeconomic policies (QIRMP) on economic growth.

In the trilemma generated by global integration, Monetary Unions are considered as an optimal way to pursue at least two of the three desirable goals at stake (economic integration and proper public policy management) at the expense of the third (national sovereignty) or as a subregional partial solution to the trilemma when lack of more broader consensus for the loss of sovereignty exists. We measure in this paper whether such a solution has testable consequences on levels and growth of real per capita GDP consistently with the title of the agreement establishing the path for convergence toward the EMU (the Stability and Growth Pact). We start with a short institutional background documenting the strict consequentiality between the Maastricht Treaty and the Stability and Growth Pact, on the one side, and the target of the MU, on the other side, showing how EU-non Eurozone countries had weaker obligations in the convergence period. We therefore argue that effects of MU are anticipated and must be evaluated starting from the convergence process. In principle, and on the basis of theoretical and simply rational grounds, we expect that the anticipated and concurring effects of the EMU should materialize in terms of reduced REER volatility and of higher quality and reduced within group variability of institutional rules and economic policies. When comparing relative changes in these variables of EU Eurozone countries with a control sample we find with surprise that, while the REER volatility reduction effect is strong and confirmed, the positive change in quality of institutional rules and economic policies is not higher than that in EU non Eurozone and in other non OECD countries. In a second step, we test in different ways whether these two effects have significant impact on levels and growth of per capita GDP. We find a robust effect on levels for both institutional quality and reduction of REER volatility, confirmed and reinforced by a direct positive effect of Eurozone countries during the convergence period. We also find a weaker and less robust positive effect on growth of the two variables in cross-sectional and panel estimates.