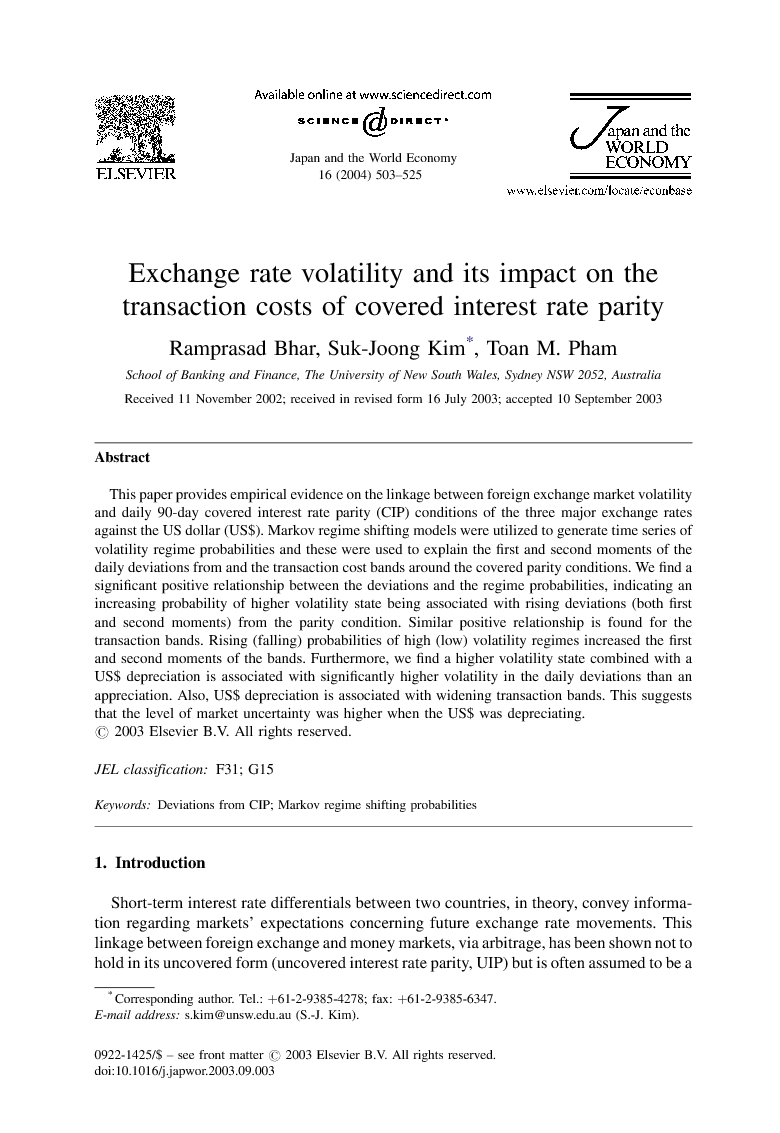 This paper provides empirical evidence on the linkage between foreign exchange market volatility and daily 90-day covered interest rate parity (CIP) conditions of the three major exchange rates against the US dollar (US$). Markov regime shifting models were utilized to generate time series of volatility regime probabilities and these were used to explain the first and second moments of the daily deviations from and the transaction cost bands around the covered parity conditions. We find a significant positive relationship between the deviations and the regime probabilities, indicating an increasing probability of higher volatility state being associated with rising deviations (both first and second moments) from the parity condition. Similar positive relationship is found for the transaction bands. Rising (falling) probabilities of high (low) volatility regimes increased the first and second moments of the bands. Furthermore, we find a higher volatility state combined with a US$ depreciation is associated with significantly higher volatility in the daily deviations than an appreciation. Also, US$ depreciation is associated with widening transaction bands. This suggests that the level of market uncertainty was higher when the US$ was depreciating.

Empirical linkages between exchange rate volatilities and the time varying nature of daily covered interest rate parity conditions have been investigated in this paper. The time series of different volatility regime probabilities were used as explanatory variables to explain the first and second moments of daily deviations from CIP conditions and the transaction cost bands around the CIP conditions for the three currencies, the DEM, the YEN, and the UKP against the US$. We find significant explanatory power of these regime probabilities and the results of the estimations indicate that the higher is the probability of the foreign exchange market belonging to a higher volatility state, the higher is the conditional volatility of daily CIP deviations. We conjecture that this positive linkage is due to the heightened need to price in the extra risk in the forward contracts (in the form of a wider bid–ask spread) to mark a higher volatility state of the market. This view is consistent with the evidence of widening transaction cost bands in response to rising (falling) probability of high (low) volatility regime. It was also noticed that the combination of higher volatility and the US$ depreciation led to the highest rise in the conditional volatility of the deviations. Also, widening transaction band was associated with US$ depreciation and high volatility. This suggests a US$ depreciation is associated with higher level of uncertainty in the foreign exchange market necessitating higher spreads for market makers, and this could explain the widening and more volatile transaction bands as well as higher volatility of CIP deviations. Our contribution to the literature is the empirical confirmation of the hypothesis that there exists a positive relationship between spot foreign exchange market volatility and the risk premium/transaction cost considerations in the market from a research angle that has not been implemented previously. In particular, the volatility regime probabilities were shown to be an important factor in explaining the daily CIP deviations and the time varying nature of the transaction cost bands around the CIP conditions.