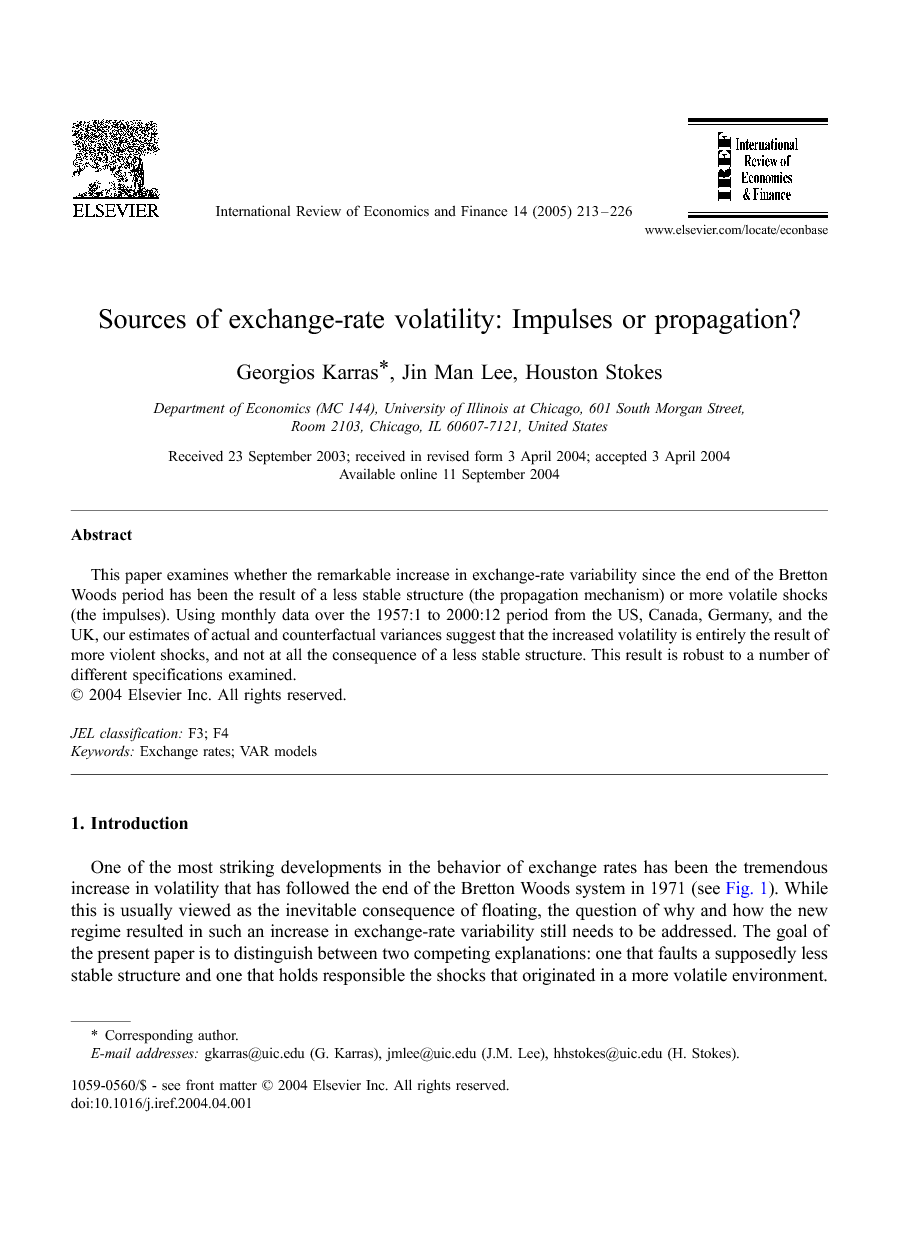 This paper examines whether the remarkable increase in exchange-rate variability since the end of the Bretton Woods period has been the result of a less stable structure (the propagation mechanism) or more volatile shocks (the impulses). Using monthly data over the 1957:1 to 2000:12 period from the US, Canada, Germany, and the UK, our estimates of actual and counterfactual variances suggest that the increased volatility is entirely the result of more violent shocks, and not at all the consequence of a less stable structure. This result is robust to a number of different specifications examined.

One of the most striking developments in the behavior of exchange rates has been the tremendous increase in volatility that has followed the end of the Bretton Woods system in 1971 (see Fig. 1). While this is usually viewed as the inevitable consequence of floating, the question of why and how the new regime resulted in such an increase in exchange-rate variability still needs to be addressed. The goal of the present paper is to distinguish between two competing explanations: one that faults a supposedly less stable structure and one that holds responsible the shocks that originated in a more volatile environment.Exchange-rate variability has been the subject of intense study, but has been usually considered as an exogenous factor, rather than something that itself needs to be explained. Thus, a vast literature has investigated whether the much greater post-Bretton Woods volatility has affected the behavior of key macroeconomic variables using various data sets and econometric methods. Overall, the evidence seems to suggest that there have been no such effects, or that they are too small to measure.1 For example, Baxter and Stockman (1989) find that the exchange-rate regime does not influence the behavior of industrial production, consumption, exports, and imports for a sample of 49 countries. Using a very different methodology, Gagnon (1993) similarly reports that exchange-rate variability has an insignificant effect on the level of trade. More recently, perhaps because of the consensus view summarized above and the arrival of the euro, the focus has shifted on the economic effects of currency unions and dollarization (real and prospective). This literature is also growing very rapidly, but the consensus so far is that monetary integration has sizable trade effects. For example, Rose (2000) and Tenreyro and Barro (2003) are among the studies that conclude that a common currency enhances trade between economies.2 While the effects of different exchange-rate regimes on the economy are of great interest and will doubtless continue to be investigated, the present paper looks at exchange-rate variability from a different perspective. Instead of examining the consequences of exchange-rate volatility, our goal is to shed light on its causes. In particular, using an innovative technique recently employed by Stock and Watson (2002) in their study of business-cycle volatility, we will try to ascertain whether post-Bretton Woods variability in exchange rates has been the result of a less stable structure (the propagation mechanism) or more violent shocks (the impulses). Using monthly data from the US, Canada, Germany, and the UK, our evidence suggests that the increased volatility is entirely the result of more violent shocks, and not at all due to a less stable structure. We show that if the Bretton Woods structure had been combined with the post-Bretton Woods shocks, pre-1973 exchange rates would have been as volatile as after 1973 (and, therefore, the system would have collapsed earlier). On the contrary, if the post-Bretton Woods structure had coincided with the Bretton Woods shocks, exchange rates since 1973 would have been as stable as under Bretton Woods. The rest of the paper is organized as follows. Section 2 discusses the econometric methodology and the sources of the data used in the estimation. Section 3 presents the empirical results and implements a number of robustness checks. Section 4 discusses the findings and some policy implications, and concludes.

Why has exchange-rate volatility increased so much since the collapse of the Bretton Woods system? One possible answer is that the economic structure determining the value of exchange rates underwent a significant change, most likely as a direct result of the change in regime, making it sufficiently less stable to account for the entire increase in volatility. Another possibility is that the structure remained essentially the same, and the increased variability is entirely the result of a more volatile economic environment, characterized by more violent economic shocks. A third, and a priori more plausible answer, is one that combines the first two, assigning some of the blame to the structure (the propagation mechanism) and the rest to the shocks (the impulses). This paper has investigated the issue using an econometric technique employed by Stock and Watson (2002) in their study of business-cycle volatility. Using monthly and quarterly data from the US, Canada, Germany, and the UK, we have estimated several exchange-rate models over two time periods: 1957–1971, a Bretton Woods period, and 1973–2000, the post-Bretton Woods period. The estimates have allowed us to calculate “counterfactual” variances for the exchange rates; i.e., the hypothetical variances that would have obtained if one period's structure had been combined with the other period's shocks. Comparing these values to the actual variances observed (or estimated) for the two periods, it becomes possible to compare the relative contribution of propagation and impulses to the higher variability. Our results are very easy to summarize. We find that the increased exchange-rate volatility is entirely the result of more violent shocks and not at all due to a less stable structure. Put differently, we show that if the Bretton Woods structure had been combined with the post-Bretton Woods shocks, pre-1973 exchange rates would have been as volatile as they turned out to be after 1973. Conversely, if the post-Bretton Woods structure had been combined with the Bretton Woods shocks, exchange rates since 1973 would have been as stable as they were under Bretton Woods. These results hold for all different exchange rates, all estimated models, and both data frequencies examined. What is the economic significance of these results? Consider first the finding that the Bretton Woods volatility would have been as high as that of the post-1973 period, if the Bretton Woods structure had coincided with the more recent period's shocks. This implies that, in that hypothetical case, the system would have been under much more strain and, likely, would have collapsed at a much earlier date. Next, consider the finding that the post-Bretton Woods exchange rates would have been as tranquil as under Bretton Woods, if the post-1973 structure had coincided with the earlier period's shocks. This suggests that the change in exchange-rate regime by itself is not at all responsible for the higher observed volatility. In fact, combining the two arguments of this paragraph, it can be argued that the change in the exchange-rate regime that occurred in the early 1970s is more accurately portrayed as the consequence, rather than the cause, of a dramatically higher volatility.12 A question, of course, that remains is what have been the causes of the more volatile shocks in the post-Bretton Woods period, and whether one of these causes may have been indirectly linked to the regime change itself. Although beyond the scope of the present paper (and probably not amenable to the methodology employed here), this is a very interesting question for future research.