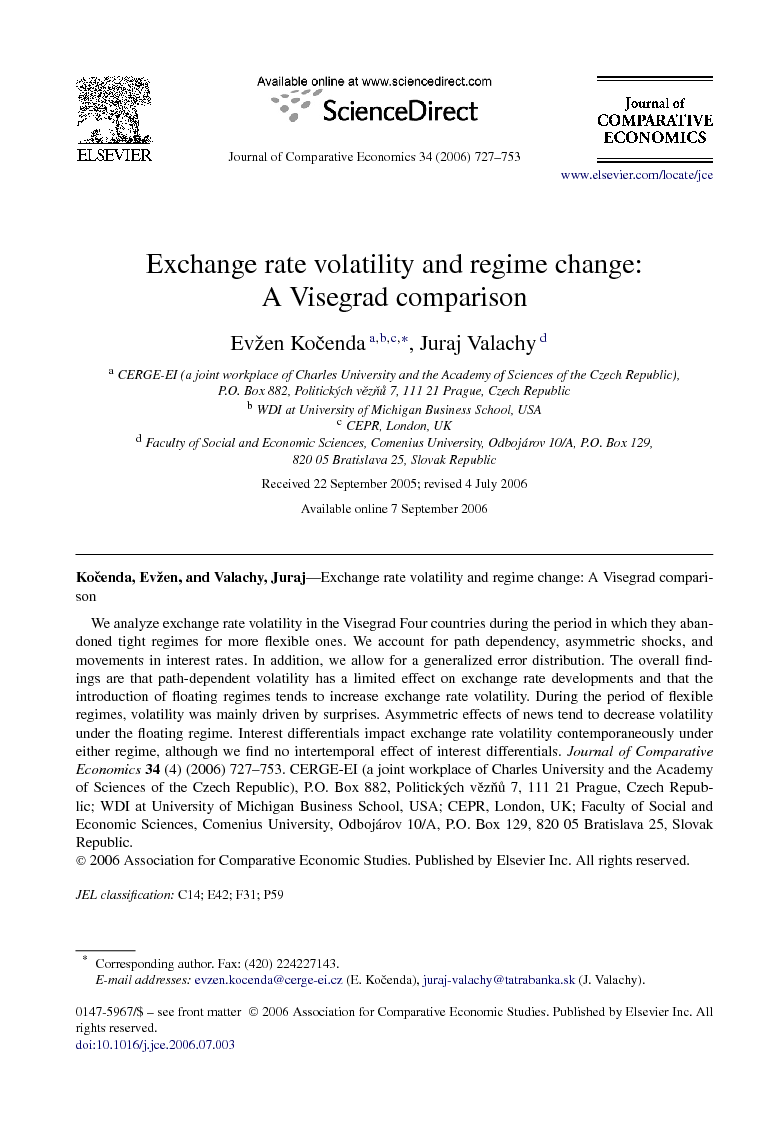 The volatility of exchange rates under different regimes has been studied extensively in the literature.1 Since the pioneering work of Mussa (1986), conventional wisdom indicates that exchange rate volatility is greater under a flexible regime than that under a fixed arrangement. However, the measurement of volatility has engendered much debate with the approach shifting from the use of standard deviation towards the use of foreign exchange options and conditional heteroskedasticity type models. Exchange rate volatility and its measurement take on new importance in the context of the transition process in the Central and Eastern European (CEE) countries and their integration into the European Union. Since the early years of transition, most of the advanced reformers among CEE countries have developed independent, autonomous monetary policies. Concurrently, they have departed from fixed exchange rates by applying various exit strategies at different times and with different intensity and have moved towards a type of inflation targeting as a policy instrument, as Orlowski (2001) reports.2 In addition, economic integration brought increased international trade openness. Égert and Morales-Zumaquero (2005) document that exchange rate volatility weakens exports with the impact varying across sectors and across CEE countries; Babetskii (2005) shows that a decrease in exchange rate volatility has a positive effect on demand shock convergence. On the institutional level, exchange rate stability is defined as one of the Maastricht criteria for monetary integration.3Orlowski (2003) stresses that candidate countries for the Economic and Monetary Union (EMU) accession must demonstrate their capability to manage inflation and the exchange rate risk premium as a necessary prerequisite for successful monetary convergence. Hence, Orlowski (2004) argues that diminishing exchange rate risk is a key criterion for evaluating currency stability and, thus, the effectiveness of monetary convergence to the euro. In this paper, we analyze exchange rate volatility in the four Visegrad countries, i.e., the Czech Republic, Hungary, Poland, and Slovakia, during the period in which they were abandoning tight regimes in favor of more flexible ones.4 In analyzing exchange rate volatility, we account for path dependency, asymmetric shocks, and movements in interest rates. We find that introduction of floating regimes tends to increase exchange rate volatility, which conforms to conventional wisdom. Moreover, the degree of persistence in exchange rate volatility differs with respect to currency but remains at a similar level under the floating regime. Furthermore, the effect of asymmetric news tends to decrease volatility under the float. Finally, the interest rate influences exchange rate volatility in somewhat non-obvious ways in that, under both regimes, the contemporaneous effect of interest differentials impacts exchange rate volatility but the coefficients measuring the intertemporal effect of interest differentials are insignificant. In our empirical and methodological approaches, we focus on the comparative experiences of the new member states in European integration. The rest of the paper is organized as follows. Section 2 provides an account of exchange rate developments and the arrangements in the Visegrad countries. Section 3 discusses exchange rate volatility and the sources of this volatility that are specific to the process of transition. Section 4 describes the methodology used to measure volatility while Section 5 provides details about the data and changes in exchange rate regime. In Section 6, we present our empirical results. We conclude with comments and policy implications.