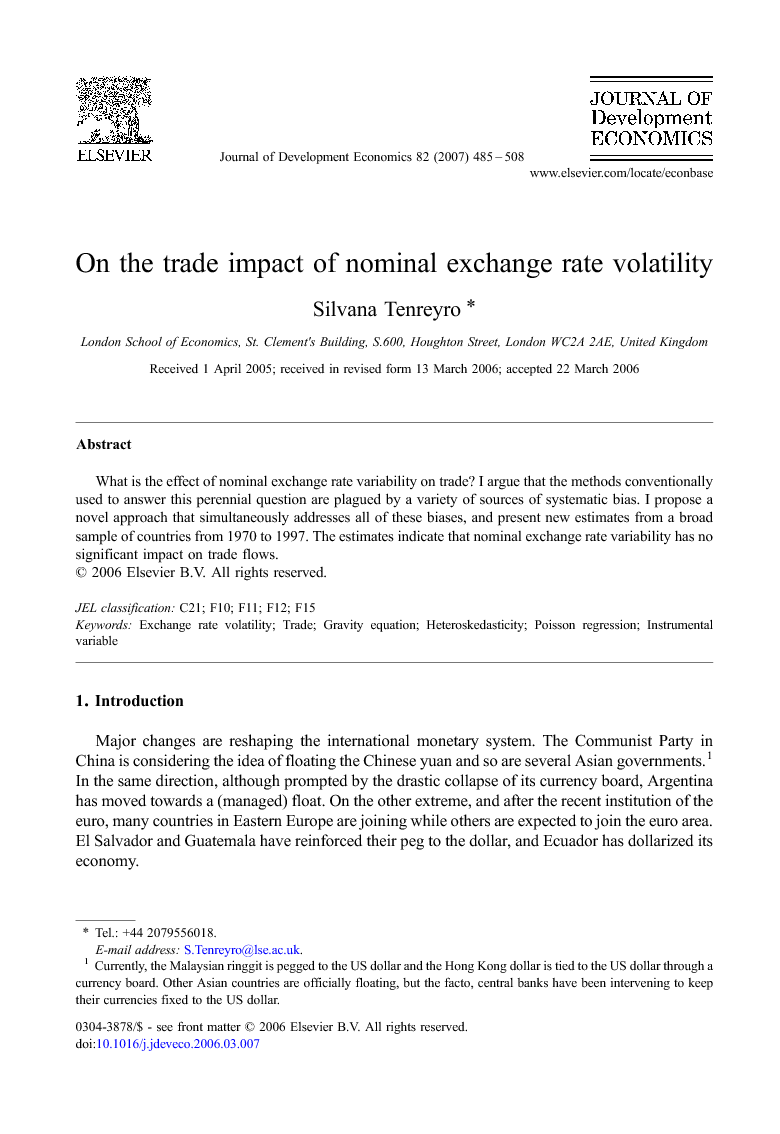 What is the effect of nominal exchange rate variability on trade? I argue that the methods conventionally used to answer this perennial question are plagued by a variety of sources of systematic bias. I propose a novel approach that simultaneously addresses all of these biases, and present new estimates from a broad sample of countries from 1970 to 1997. The estimates indicate that nominal exchange rate variability has no significant impact on trade flows.

Does exchange rate variability harm trade? This paper takes a long road to say “no.” However, the long road is not futile: in the quest for an answer, the process uncovers the problems associated with the techniques typically used in empirical applications of the gravity equation. Moreover, the methodological points raised in the paper and the proposed solution can be extended to other contexts where log-linearizations (or, more generally, non-linear transformations) coupled with heteroskedasticity and/or endogeneity threaten the consistency of simple estimators. Examples include production functions and Mincerian regressions for earnings. I argue that all potential sources of bias should be tackled simultaneously and that partial corrections can be highly misleading. I hence develop an IV PPML approach that addresses the various potential biases highlighted in this paper. The instrument I use relies on the fact that many countries find it useful to peg their currency to that of a large, and stable “anchor” country in order to reduce inflation. Hence, two countries that have chosen to peg officially or de facto to the same anchor will tend to experience low bilateral exchange rate variability. This observation motivates the use of the probability that two countries peg their currencies to the same anchor as an instrument for their bilateral exchange rate volatility. Importantly, the propensity to share a common anchor-currency uses information on the relationship between the anchor country and each individual client country so that my instrument only captures reasons for pegging to the anchor country other than the desire to increase bilateral trade between any two clients. The results show that the probability that a client-country pegs its currency to one of the main anchors increases when the client is closer to the anchor, and when they share a common colonial past. Also, the propensity to anchor the currency increases with the size of the anchor and the difference in size between the anchor and the potential client. The paper contributes to the international policy debate by showing that exchange rate variability does not harm export flows. The elimination of exchange rate variability alone, hence, should not be expected to create any significant gain in trade in the aftermath of the recent waves towards stronger pegs.