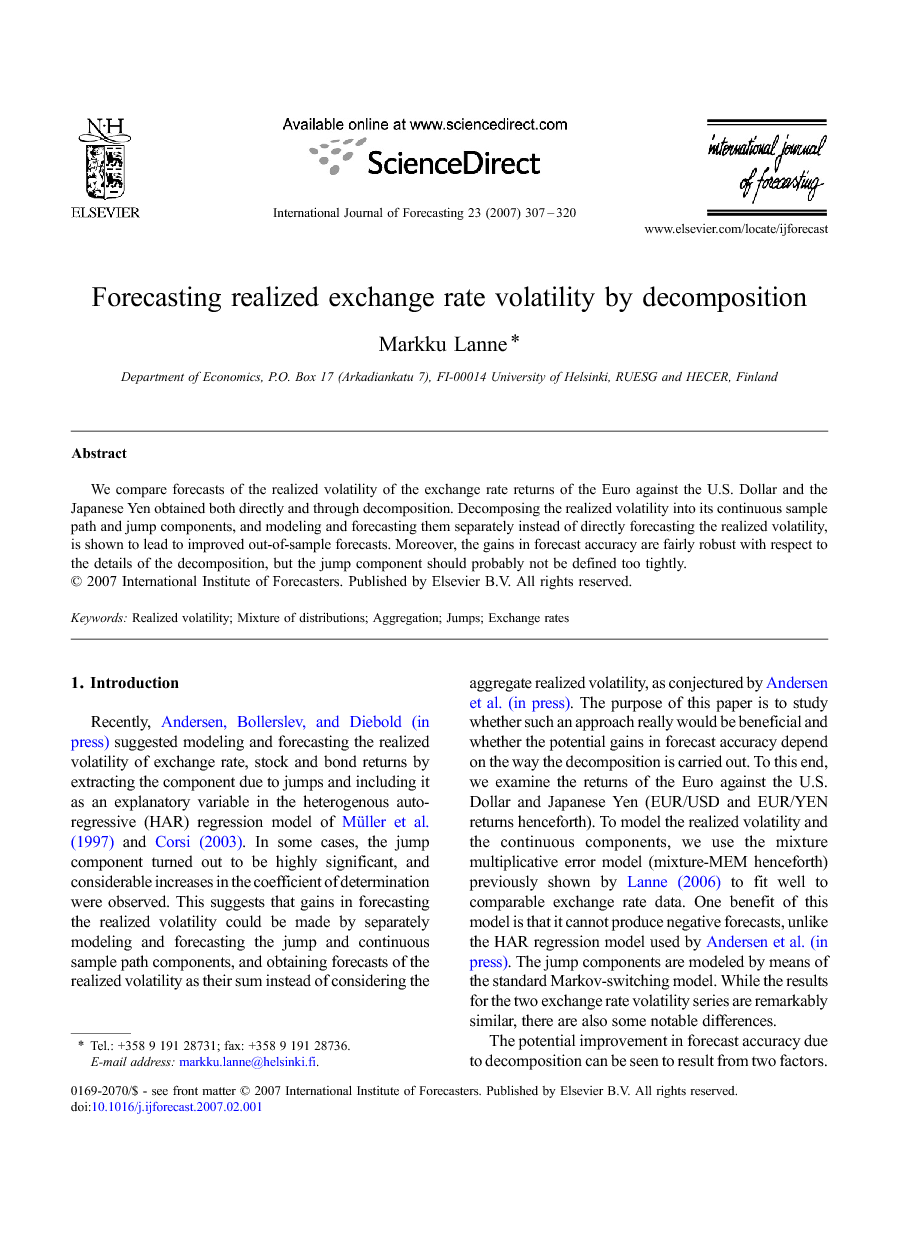 Recently, Andersen, Bollerslev, and Diebold (in press) suggested modeling and forecasting the realized volatility of exchange rate, stock and bond returns by extracting the component due to jumps and including it as an explanatory variable in the heterogenous autoregressive (HAR) regression model of Müller et al. (1997) and Corsi (2003). In some cases, the jump component turned out to be highly significant, and considerable increases in the coefficient of determination were observed. This suggests that gains in forecasting the realized volatility could be made by separately modeling and forecasting the jump and continuous sample path components, and obtaining forecasts of the realized volatility as their sum instead of considering the aggregate realized volatility, as conjectured by Andersen et al. (in press). The purpose of this paper is to study whether such an approach really would be beneficial and whether the potential gains in forecast accuracy depend on the way the decomposition is carried out. To this end, we examine the returns of the Euro against the U.S. Dollar and Japanese Yen (EUR/USD and EUR/YEN returns henceforth). To model the realized volatility and the continuous components, we use the mixture multiplicative error model (mixture-MEM henceforth) previously shown by Lanne (2006) to fit well to comparable exchange rate data. One benefit of this model is that it cannot produce negative forecasts, unlike the HAR regression model used by Andersen et al. (in press). The jump components are modeled by means of the standard Markov-switching model. While the results for the two exchange rate volatility series are remarkably similar, there are also some notable differences. The potential improvement in forecast accuracy due to decomposition can be seen to result from two factors. First, once the variation due to jumps has been eliminated from the realized volatility series, the process of the remaining continuous sample path component may be more easily captured, i.e., its process may be more easily estimable. Second, the jump component itself may contain predictable variation that contributes toward the forecast of the realized volatility. We show that, at least with these data, statistically significant gains in out-of-sample forecast accuracy can be made by decomposing, and this finding is fairly robust with respect to the details of the decomposition. However, if the jump component is very tightly defined, i.e., it takes nonzero values on only the days with the very greatest jumps, it has very little predictable variation so that virtually all the gains in forecast accuracy come from the improvements in estimating the process of the continuous component, causing somewhat less accurate forecasts at the one-day horizon. This finding extends the results of Andersen et al. (in press), which defined the jumps as being the very largest ones. By building a model for the jump component, we are able to forecast at longer horizons, in contrast to Andersen et al. (in press), and our results demonstrate gains in accuracy in that case as well. Although the results are clear in showing the benefits of the decomposition, the diagnostic tests suggest that as far as the jump component is concerned, even further improvements might be attainable by the use of more sophisticated models. While the results are in a sense specific to the chosen econometric models, they should be rather general, in that the mixture-MEM model has previously been shown to fit comparable exchange rate data at least as well as relevant alternatives in the literature, and diagnostic checks here also indicate its adequacy. The plan of the paper is as follows. In Section 2 the decomposition methods put forth by Andersen et al. (in press) are reviewed and applied to the EUR/USD data. In Section 3 the mixture-MEM and Markov-switching models are introduced and the estimation results are reported, while the forecast comparisons are presented in Section 4. Finally, Section 5 concludes.

Being EUR/USD and EUR/JPY exchange rate data it has been shown that by decomposing the realized volatility into its jump and continuous sample path components, considerable gains in out-of-sample forecast accuracy can be obtained. Moreover, this finding seems to be relatively independent of the details of the decomposition in the range typically considered. Hence, we have been able to answer the question posed by Andersen et al. (in press) of whether separately modeling and forecasting the two components is beneficial in the affirmative. However, further work along these lines is called for, as our results may be specific to the particular data sets and models. In particular, it would be interesting to see whether similar results were obtained with stock and bond market data. Although diagnostic tests suggest that the chosen specification is adequate, comparable gains might not be possible when other commonly used models are employed. The results of Andersen et al. (in press) indicate that gains could be made by forecasting with heterogenous autoregressive models specified for the realized variance and its logarithm. This is likely to be true for some other models as well. On the other hand, Lanne (2006) found that the mixture-MEM model considered in this paper is superior to a large number of rival models in forecasting realized exchange rate volatility, suggesting that very large gains from decomposition are likely to be required to surpass that model. We leave this issue for future research.