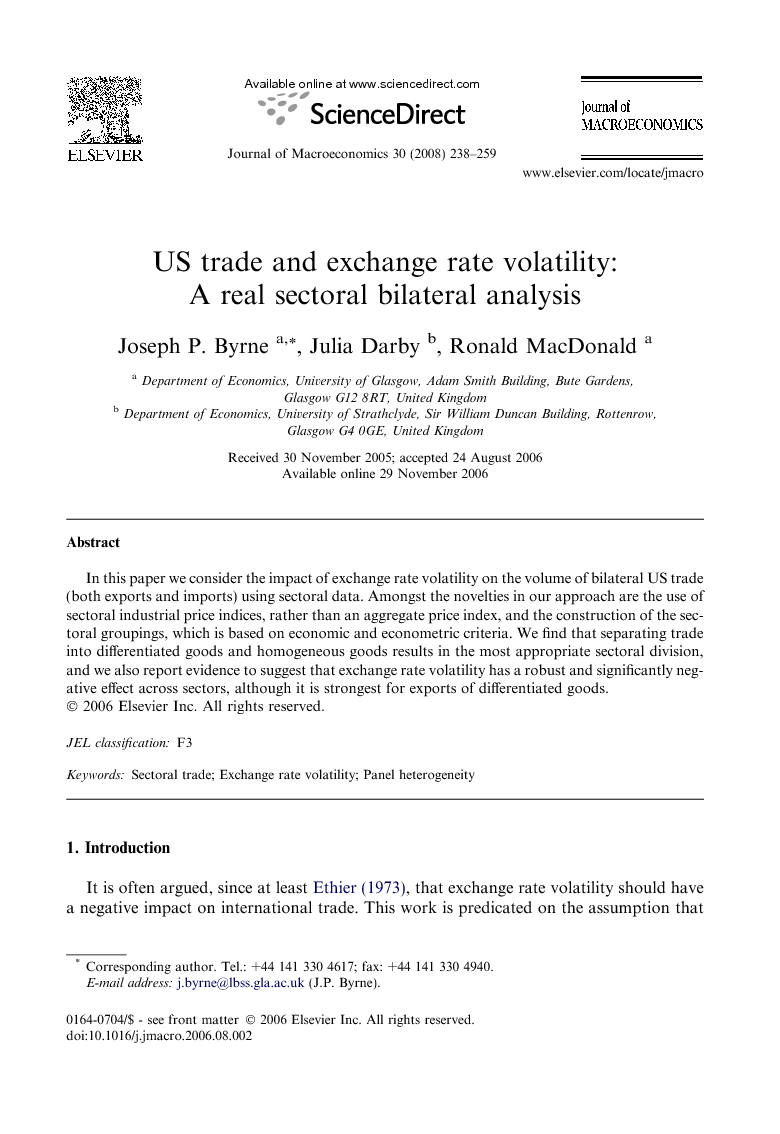 In this paper we consider the impact of exchange rate volatility on the volume of bilateral US trade (both exports and imports) using sectoral data. Amongst the novelties in our approach are the use of sectoral industrial price indices, rather than an aggregate price index, and the construction of the sectoral groupings, which is based on economic and econometric criteria. We find that separating trade into differentiated goods and homogeneous goods results in the most appropriate sectoral division, and we also report evidence to suggest that exchange rate volatility has a robust and significantly negative effect across sectors, although it is strongest for exports of differentiated goods.

It is often argued, since at least Ethier (1973), that exchange rate volatility should have a negative impact on international trade. This work is predicated on the assumption that firms are risk averse and exchange rate risk reduces the benefits of international trade. The existence of financial markets allows agents to hedge exchange rate risk and this may reduce or eliminate the potentially negative effect of exchange rate volatility on trade. However, forward markets are not complete, or fully utilised (see Dominguez and Tesar, 2001) and indeed some theoretical papers have suggested that the basic effect of exchange rate volatility on trade is unchanged even with complete capital markets (see Demers, 1991). Rose (2000) notes that empirical research on the link between exchange rate volatility and trade had essentially ceased towards the end of the 1990s. However, with analytical developments and improvements in the quantity and quality of data, there has recently been a re-examination of this issue (see, for example, Peridy, 2003, Broda and Romalis, 2004, Clark et al., 2004, Tenreyro, 2004 and Klein and Shambaugh, 2004). Because there may be differences in the impact of exchange rate volatility across sectors, recent studies have often used sectoral trade data and sought economic justifications for differences across industry. For example, Rauch (1999) develops a justification for different disaggregate trade behaviour based on the business networks involved in international trade and incomplete information. In particular, Rauch (1999) emphasises the importance of search costs involved in matching buyers and sellers for differentiated goods: trade of this kind is facilitated by knowledge of particular markets or networks since the characteristics of some manufactured products are not readily known (e.g. performance and reliability). Given these search costs this also means that it is not easy for firms to switch foreign suppliers or find new buyers in response to changes in the exchange rate. This will consequently affect profitability, with negative effects in instances where individuals dislike increased risk. In contrast, homogeneous, or intermediate, goods are typically traded on exchanges, product characteristics do not vary between suppliers, can be substituted quickly and are therefore not regarded as having search costs. There will be considerable indifference between homogeneous goods sourced from different suppliers. However, existing studies of the effect of exchange rate volatility on detailed sectoral and bilateral trade, use the CPI as the price deflator for trade. Such a deflator is likely to be inappropriate at the individual sectoral level since it abstracts from the sharply differing sectoral price trends (e.g. in agriculture and in computers). In this paper we follow a number of general international trade studies (see, for example, Head and Mayer, 2000, Erkel-Rousse and Mirza, 2002 and Saito, 2004) and use price series at the industrial level as our deflator in our trade/exchange rate volatility relationships. Importantly, these general studies do not condition on exchange rate volatility. A further novelty in our work is that we propose using economic and econometric criteria to underpin our sectoral disaggregation, while revisiting the effects of exchange rate volatility on international trade. In particular, we implement Rauch’s approach to disaggregation in examining the impact of the second moment of the exchange rate on imports and exports. Furthermore, in our econometric modelling of the trade relationships we consider issues of measurement error associated with exchange rate volatility and also the endogeneity of trade and volatility, as suggested by Hau, 2002, Broda and Romalis, 2004 and Tenreyro, 2004. Both of these econometric issues can be dealt with using instrumental variables and that is the approach we follow here. In our estimation we fully utilise a large cross sectional data set by adopting a fixed-effects panel approach, which allows us to test for cross sectional parameter heterogeneity. The remainder of the paper is laid out as follows. Section 2 provides a brief literature review, Section 3 discusses our modelling methods, Section 4 sets out the data, Section 5 contains our results and Section 6 concludes.

In this paper we have considered the impact of exchange rate uncertainty on sectoral bilateral imports and exports to the US from a sample of six European countries. The main novelties over other work in this area, for example Clark et al. (2004), lies in our use of disaggregate price data as our trade deflator, rather than the US consumer price index, and our construction of new disaggregate sectors to examine the importance of exchange rate uncertainty. The use of a deflator such as the US CPI may result in the imposition of inappropriate constraints, which affect subsequent results and may explain why exchange rate volatility often appears as an insignificant explanatory variable in trade equations. Also our use of detailed sectoral deflators emphasises the pertinence of an Armington specification. Our construction of the disaggregate sectors is based upon economic and econometric considerations and we find Rauch’s (1999) discussion on the different effect of networks on trade pertinent here. To recap, for goods which trade only where there are costly networks in place, any factor which reduces the revenue of such trade will have a direct bearing on the firm’s profitability. For goods sold on organised exchanges it is much easier to find alternative buyers when market conditions change and where exchange rates move against a firm’s decision to engage in international trade, it should be possible to switch markets. In the latter situation exchange rate volatility should not adversely affect trade. Amongst our findings is the result that pooling all industries together provides us with evidence of a negative effect on trade from exchange rate volatility. But using econometric criteria in particular we find evidence that this effect may be different across industries, as suggested most recently by the empirical study of Peridy (2003), although he abstracts from relative price effects. We also find that output and relative price coefficients are different on a disaggregated basis. Moreover, the effect of exchange rate uncertainty is negative and significant for differentiated goods, which is the great majority of trade, and insignificant for homogeneous goods, supporting the arguments of Rauch (1999). This would seem to suggest that sectoral differences do exist in explaining the different impact of volatility on trade and may be based on the characteristics of the markets in which they trade. We believe this is an important finding and may be the key to understanding why so many studies have not found a clear-cut empirical relationship between exchange rate volatility and trade when using aggregate trade data. It also suggests that a greater degree of disaggregation, at the industry, product or firm level, may provide further worthwhile results