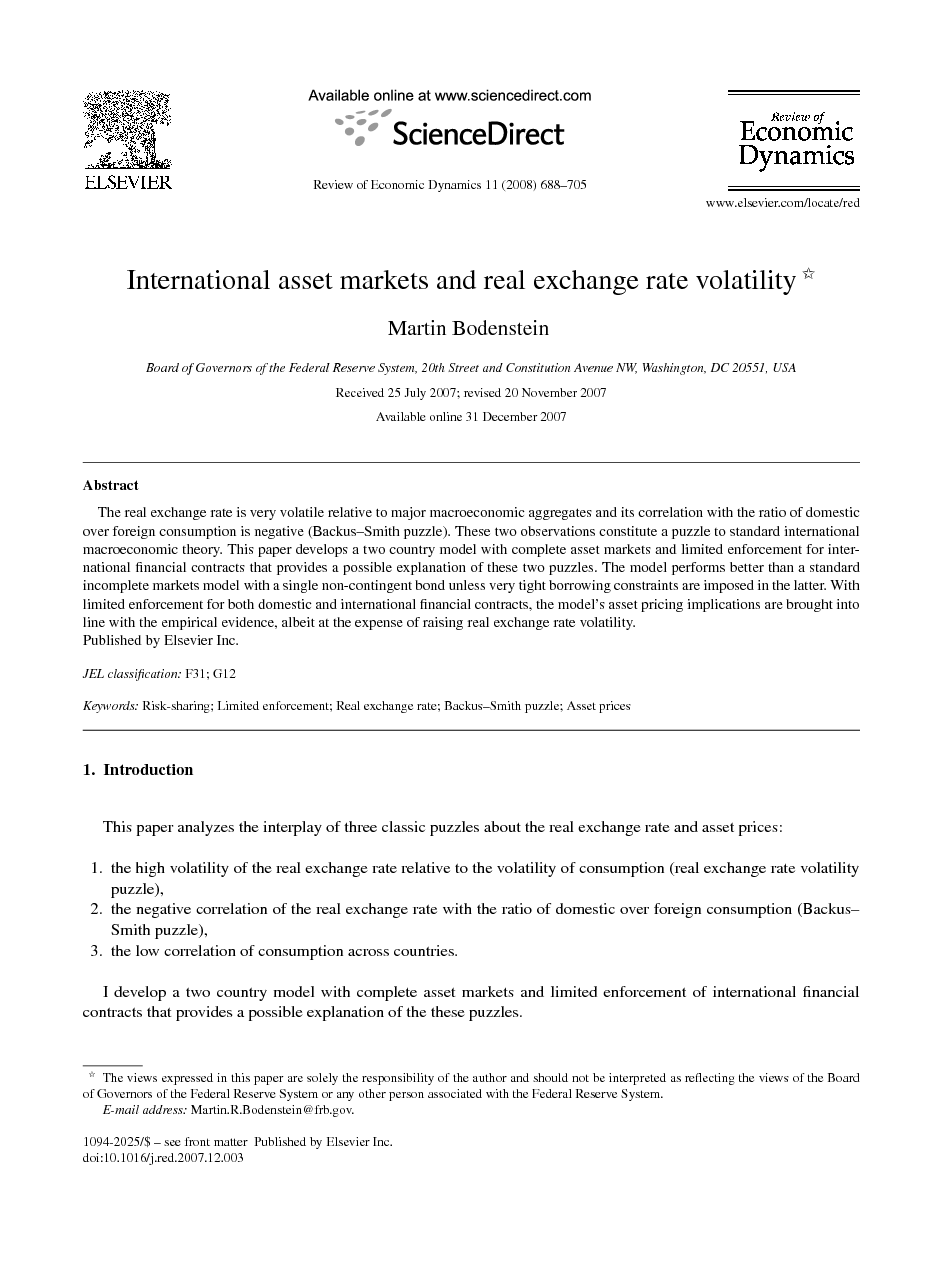 The real exchange rate is very volatile relative to major macroeconomic aggregates and its correlation with the ratio of domestic over foreign consumption is negative (Backus–Smith puzzle). These two observations constitute a puzzle to standard international macroeconomic theory. This paper develops a two country model with complete asset markets and limited enforcement for international financial contracts that provides a possible explanation of these two puzzles. The model performs better than a standard incomplete markets model with a single non-contingent bond unless very tight borrowing constraints are imposed in the latter. With limited enforcement for both domestic and international financial contracts, the model's asset pricing implications are brought into line with the empirical evidence, albeit at the expense of raising real exchange rate volatility.

Most international macroeconomists believe that international risk sharing is limited by financial market frictions and that these frictions are key to understanding the international business cycle. This paper examines the extent to which models with endogenous incomplete markets can resolve the exchange rate volatility puzzle and the Backus–Smith puzzle. A model with complete markets and enforcement constraints for international financial contracts but frictionless domestic asset markets provides a candidate explanation of these two puzzles if agents are not too patient. For sufficiently impatient agents, international risk sharing is very limited. As a result cross country consumption levels are lowly correlated and real exchange rates are volatile and negatively correlated with relative consumption across countries. However, since asset markets are complete within each country and aggregate income fluctuations are low, the model inherits all the standard asset pricing puzzles. In particular, it implies stochastic discount factors that are too smooth vis-à-vis the data. Once I extend the benchmark model by introducing enforcement constraints also into each country’s local financial markets, the model delivers more volatile asset prices. However, it now fails to deliver the right amount of real exchange rate volatility. As risk sharing is low both within and across countries, the marginal rates of substitution in the two countries are not very correlated and the real exchange rate is too volatile in comparison to the data. It seems that models that severely restrict the amount of international risk sharing for all agents will be subject to this failure, once it has been enriched to deliver realistic asset pricing behavior.