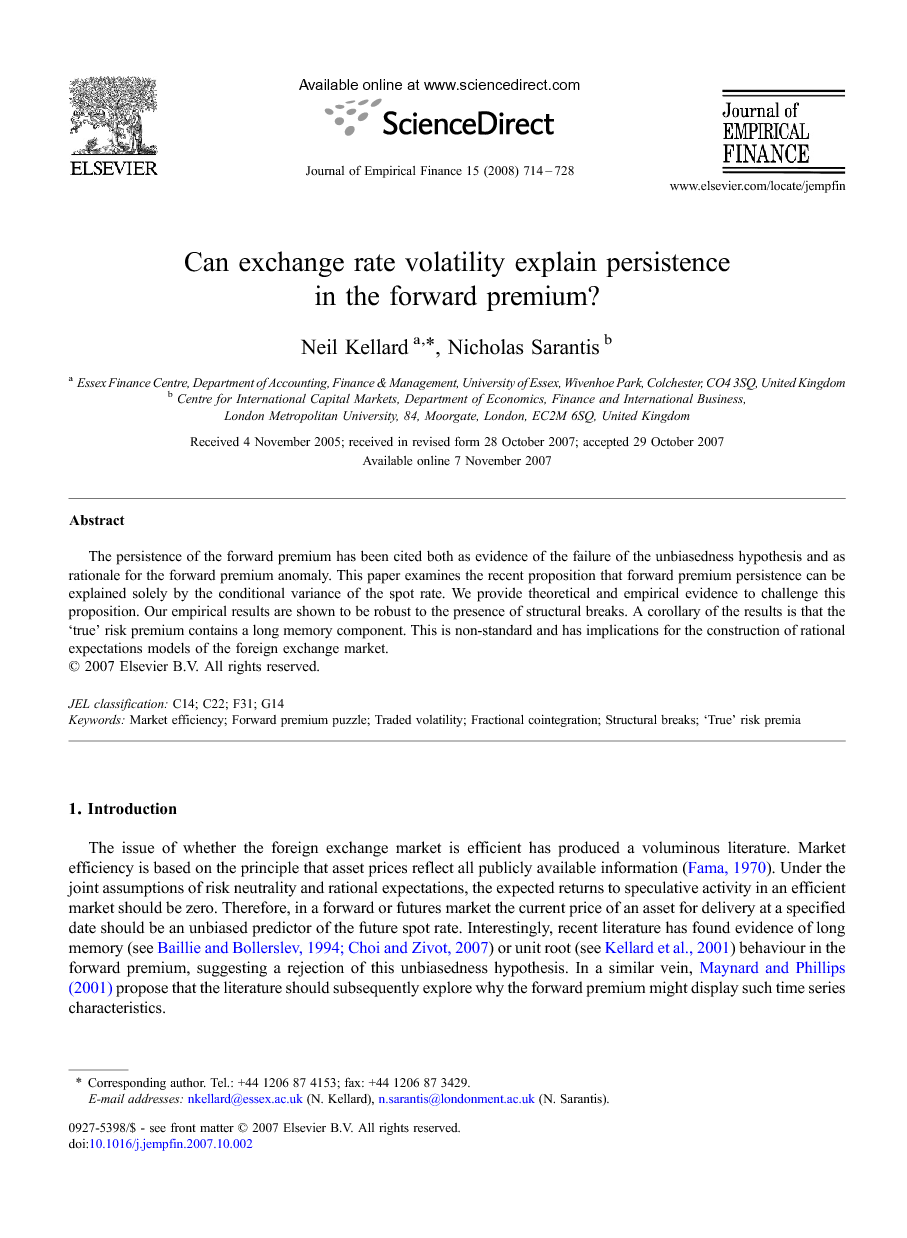 The persistence of the forward premium has been cited both as evidence of the failure of the unbiasedness hypothesis and as rationale for the forward premium anomaly. This paper examines the recent proposition that forward premium persistence can be explained solely by the conditional variance of the spot rate. We provide theoretical and empirical evidence to challenge this proposition. Our empirical results are shown to be robust to the presence of structural breaks. A corollary of the results is that the ‘true’ risk premium contains a long memory component. This is non-standard and has implications for the construction of rational expectations models of the foreign exchange market.

The issue of whether the foreign exchange market is efficient has produced a voluminous literature. Market efficiency is based on the principle that asset prices reflect all publicly available information (Fama, 1970). Under the joint assumptions of risk neutrality and rational expectations, the expected returns to speculative activity in an efficient market should be zero. Therefore, in a forward or futures market the current price of an asset for delivery at a specified date should be an unbiased predictor of the future spot rate. Interestingly, recent literature has found evidence of long memory (see Baillie and Bollerslev, 1994 and Choi and Zivot, 2007) or unit root (see Kellard et al., 2001) behaviour in the forward premium, suggesting a rejection of this unbiasedness hypothesis. In a similar vein, Maynard and Phillips (2001) propose that the literature should subsequently explore why the forward premium might display such time series characteristics. Possible determinants of the time series behaviour of the forward premium include persistent inflation differentials (Roll and Yan, 2000) and peso problems (Evans and Lewis, 1995). Baillie and Bollerslev (2000) also show, under certain assumptions, that consumption CAPM (CCAPM) implies that the conditional variance of the spot rate (CVSR), possibly in combination with a ‘true’ risk premium (TRP)1, provides an alternative rationale. Indeed, Baillie and Bollerslev (2000) exploit this possibility by simulating a model of the foreign exchange market where the assumed long memory behaviour of the conditional variance is inherited by the forward premium. Interestingly, the simulated results are broadly consistent with the empirical features of the forward premium puzzle. Subsequently, both Maynard and Phillips (2001) and Baillie et al. (2002) note, but do not test, that the forward premium and the conditional variance possess similar time series characteristics. The motivation for this paper is to examine whether the time series properties of the forward premium are solely inherited from the conditional variance of the spot rate. To our knowledge this has not been hitherto attempted in the literature. Firstly, we present a brief proof to show that CCAPM does not imply a uni-causal link between the CVSR and the forward premium. Secondly, we provide empirical support for our theoretical conjecture. Employing daily data from eight major currencies, and in contrast to the supposition of Baillie and Bollerslev (2000), it is shown that the forward premium and the CVSR are not fractionally cointegrated. Our empirical results are shown to be robust to the presence of structural breaks in the forward premium and CVSR. Finally, we discuss the main implications of our findings. Given that exchange rate volatility cannot uniquely explain the persistence of the forward premium, CCAPM posits the existence of a non-stationary and fractionally integrated TRP. This is an interesting notion given the general assumption of a stationary risk premium in the literature (see Engel, 1996) and suggests, most obviously, that rational expectations models of the foreign exchange market should be capable of producing long memory in the TRP. Presently, it should be noted that asset pricing models have been typically unable to provide risk premia with properties that generate the forward premium anomaly. The recent work by Maynard and Phillips (2001) provides theoretical evidence that the anomaly is in fact, a statistical artefact driven by long memory in the forward premium. Our results provide evidence that these two strands of literature may be joined. We posit that long memory in the TRP helps explain the time series behaviour of the forward premium, the subsequent forward premium anomaly and failure of the unbiasedness hypothesis. The paper is divided into six sections. Section 2 describes the theoretical foundations and Section 3, the empirical methodology to be adopted. Section 4 describes the data and the results, whilst Section 5 provides a discussion. Finally, Section 6 concludes.