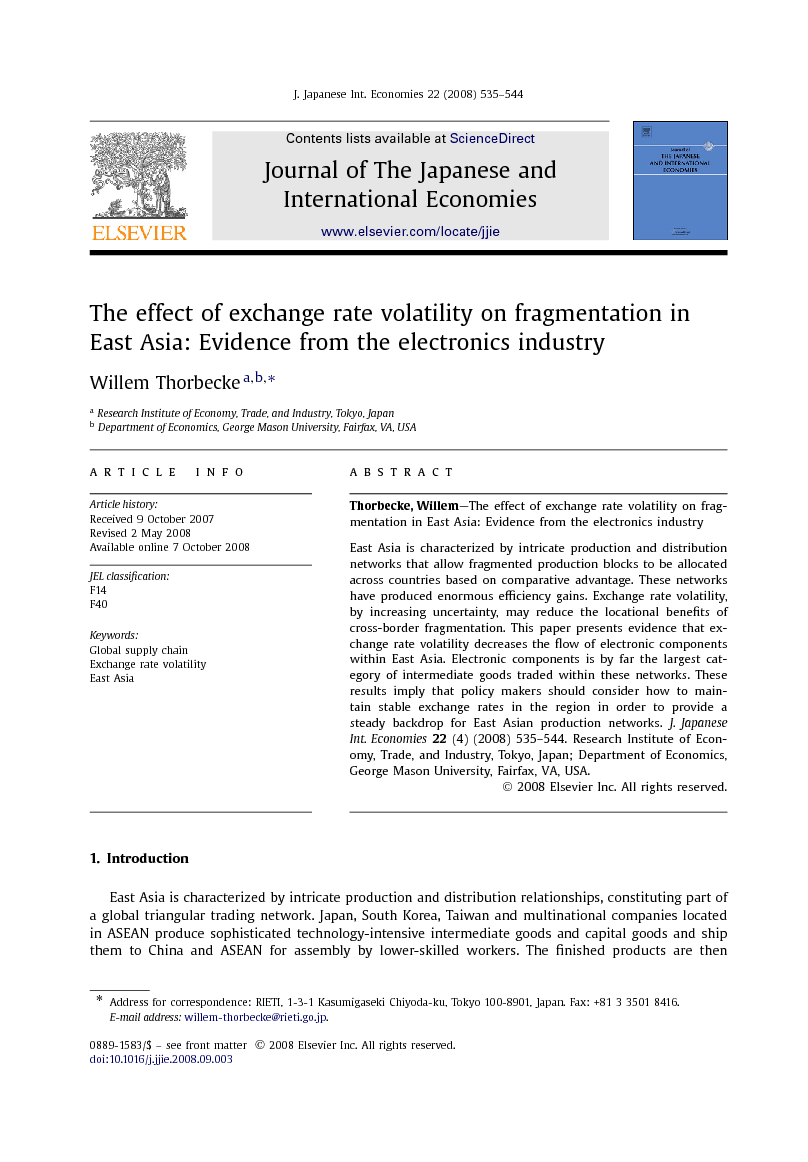 East Asia is characterized by intricate production and distribution networks that allow fragmented production blocks to be allocated across countries based on comparative advantage. These networks have produced enormous efficiency gains. Exchange rate volatility, by increasing uncertainty, may reduce the locational benefits of cross-border fragmentation. This paper presents evidence that exchange rate volatility decreases the flow of electronic components within East Asia. Electronic components is by far the largest category of intermediate goods traded within these networks. These results imply that policy makers should consider how to maintain stable exchange rates in the region in order to provide a steady backdrop for East Asian production networks. J. Japanese Int. Economies22 (4) (2008) 535–544.

East Asia is characterized by intricate production and distribution relationships, constituting part of a global triangular trading network. Japan, South Korea, Taiwan and multinational companies located in ASEAN produce sophisticated technology-intensive intermediate goods and capital goods and ship them to China and ASEAN for assembly by lower-skilled workers. The finished products are then exported throughout the world. These production and distribution networks have promoted economic efficiency and helped to make East Asia the manufacturing center of the world. This slicing up of the value-added chain in East Asia is particularly intricate and well-developed. It involves complicated combinations of intra-firm trade, arms-length transactions, and outsourcing (Kimura and Ando, 2005). These networks have allowed firms to exploit comparative advantage by breaking up long production processes and allocating the production blocks created in this way throughout Asia. The resulting production–distribution networks can be characterized as vertical intra-industry trade (VIIT). This VIIT differs both from the exchange of final goods emphasized by traditional trade theory for vertical inter-industry trade between the North and the South (e.g., between capital goods and apparel) and for horizontal intra-industry trade between the North and the North (e.g., between two differentiated types of automobiles). As Fukao et al. (2002) discuss, the production processes of an industry (e.g., the electronics industry) have been split into fragmented production blocks that can be located in different countries and the new VIIT is essentially based on differences in factor endowments in the fragmented production blocks between developing, emerging, and developed economies in the region. In order to decide on the optimal degree of fragmentation firms must weigh benefits and costs along the locational, ownership, and internalization dimensions (Kimura and Ando, 2005). Locational considerations include wage levels, factor endowments, technology transferability, physical and human infrastructure, and the existence of market-supportive institutions and political regimes. Ownership considerations are based upon technological and managerial differences between home and host country firms. The home country's advantage in this area must be sufficient to overcome the extra costs arising from differences in business customs, formal and informal norms, languages, etc. Internalization considerations refer to the net benefits obtained by FDI firms through more captive and integrated business activities conducted by parent firms. The optimal degree of internalization is determined by balancing the costs of asymmetric information, incomplete contracts, and ineffective dispute settlement mechanisms with the efficiency gains from complete outsourcing and deverticalization. When considering how exchange rate changes affect a firm's incentive for cross-border fragmentation, locational considerations are central. Exchange rate volatility, by increasing uncertainty, may reduce the locational benefits of cross-border fragmentation. In addition, an appreciation in the level of the exchange rate in the home country may cause firms or affiliates abroad to source from the host country rather than the home country. These effects have been discussed by the IMF (2005) and Yoshitomi (2007). The IMF argues that the flow of imports for processing will be driven by the demand for final exports in the rest of the world, and that the exchange rate elasticity for imports for processing will be small (about 0.1). Yoshitomi argues that exchange rate volatility will hinder the expansion of East Asian production and distribution networks. To understand Yoshitomi's argument the theoretical framework of Ando and Kimura (2007) is useful. They show that the service link cost for production blocks separated by national borders is an increasing function of risk and uncertainty. Kiyota and Urata (2004) note that exchange rate volatility may increase risk and uncertainty in East Asia. Thus volatility may interfere with the slicing up of the value-added chain in East Asia. In the case of Japan, parts and components for assembly flow in approximately equal quantities to China, ASEAN-5, and South Korea and Taiwan.1 Once a Japanese firm has invested in another East Asian country and established a cross-border production network it does not withdraw from that country. However, the volume of new FDI, capital goods, and parts and components that flows to a particular country may decrease if the country's locational advantages fall relative to other countries.2 Exchange rate volatility could thus cause Japanese firms to redirect some of their assembly operations from one East Asian country to another or back to Japan. Previous research concerning the effects of exchange rate volatility on trade has been inconclusive. Theoretically the relationship between volatility and trade depends on a number of specific assumptions (see Clark et al., 2004). Empirically the results have been mixed (see McKenzie, 1999). Several studies have investigated how volatility affects East Asian trade. Ito and Yoshida (2006), seeking to explain East Asian exports in the context of a triangular trading model using annual data from 1990 to 2000, found that exchange rate volatility did not help to explain East Asian exports to the U.S. Poon et al. (2005), using an error-correction model and more than 20 years of quarterly data for five East Asian countries, reported that exchange rate volatility reduced total exports for Japan, South Korea, and Singapore. Bénassy-Quéré and Lahrèche-Révil (2003), using panel data techniques and annual data from 1984 to 2001, reported that exchange rate volatility did not affect exports from one East Asian country to other East Asian countries. Thorbecke (2008), also using panel data techniques and annual data from 1982 to 2003, reported that volatility reduced East Asian intermediate goods exports to all countries (including East Asia and the rest of the world). This paper differs from previous studies by investigating specifically how exchange rate volatility affects parts and components exports within East Asian production networks. To do this it investigates the determinants of electronic components exports within East Asia. As documented below, electronic components is the second most exported product category among East Asian economies and final electronic goods is the most exported category from East Asian countries to the world. The flow of electronic components thus plays a crucial role in regional production networks. The results presented here indicate that exchange rate volatility does reduce trade in electronic parts and components within the region

East Asia is characterized by intricate production and distribution networks that allow fragmented production blocks to be allocated across countries based on comparative advantage. These networks have produced enormous efficiency gains. The second largest category of goods traded between East Asian countries is electronic components. In 2005 more than 15% of the goods exported between East Asian countries were electronic components. The IMF (2005) argues that the flow of parts and components to processor economies in East Asia should depend on the exports of final assembled goods from the processor economies to the rest of the world. The IMF also argues that the flow of these goods should not be sensitive to bilateral exchange rates between supply chain countries. Yoshitomi (2007) argues that exchange rate volatility, by increasing uncertainty, may reduce the locational benefits of cross-border fragmentation. The results presented here are consistent with the arguments of the IMF (2005) and Yoshitomi (2007). The flow of electronic components to processor economies in East Asia is very sensitive to the exports of final electronic goods to the rest of the world and to exchange rate volatility but not to the bilateral real exchange rate. There are at least two policy implications of the results presented here. One follows from the fact that 70% of final electronics goods exports from East Asian countries in 2005 went outside the region and 30% went to the U.S. alone. Thus, a slowdown in the rest of the world (especially the U.S.) that decreased final electronics goods exports from East Asia would also curtail the flow of electronic components within the region. Policy makers should be prepared for this. The second policy implication is that exchange rate volatility deters the flow of intermediate goods and thus the slicing up of the value-added chain. One way to maintain stable exchange rates would be for countries in the region to adopt a common basket of Asian currencies as their reference rate and establish wide bands around the central rate. Stable intra-regional exchange rates would not only maintain the flow of intermediate goods but also allow East Asian currencies to appreciate together if the dollar started to depreciate. Since intra-regional trade accounts for about 55% of total trade, concerted appreciations against the dollar would cause effective exchange rates in the region to appreciate by less than half as much. Fragmentation in East Asia is particularly sophisticated and well-developed. The production processes of the electronics industry and other industries have been split into fragmented production blocks that can be located in different countries based on differences in factor endowments. The resulting efficiency gains have been enormous. Yoshitomi (2007) argues that exchange rate volatility, by increasing uncertainty, may reduce firms' incentives for cross-border fragmentation. The results presented here for the electronics industry support his assertion. Policy makers should thus consider how to maintain stable exchange rates in the region in order to provide a steady backdrop for East Asian production networks.