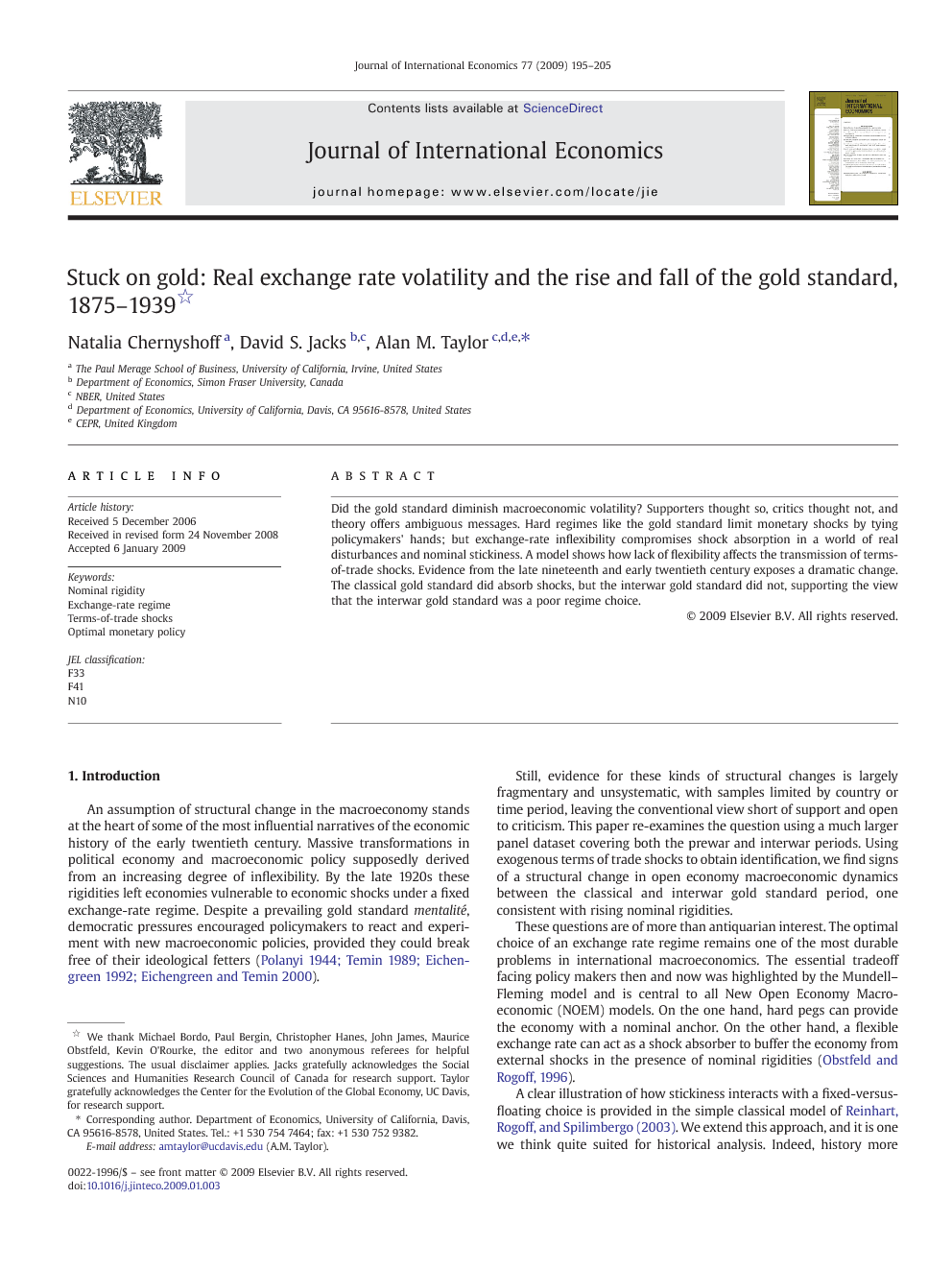 An assumption of structural change in the macroeconomy stands at the heart of some of the most influential narratives of the economic history of the early twentieth century. Massive transformations in political economy and macroeconomic policy supposedly derived from an increasing degree of inflexibility. By the late 1920s these rigidities left economies vulnerable to economic shocks under a fixed exchange-rate regime. Despite a prevailing gold standard mentalité, democratic pressures encouraged policymakers to react and experiment with new macroeconomic policies, provided they could break free of their ideological fetters ( Polanyi, 1944, Temin, 1989, Eichengreen, 1992 and Eichengreen and Temin, 2000). Still, evidence for these kinds of structural changes is largely fragmentary and unsystematic, with samples limited by country or time period, leaving the conventional view short of support and open to criticism. This paper re-examines the question using a much larger panel dataset covering both the prewar and interwar periods. Using exogenous terms of trade shocks to obtain identification, we find signs of a structural change in open economy macroeconomic dynamics between the classical and interwar gold standard period, one consistent with rising nominal rigidities. These questions are of more than antiquarian interest. The optimal choice of an exchange rate regime remains one of the most durable problems in international macroeconomics. The essential tradeoff facing policy makers then and now was highlighted by the Mundell–Fleming model and is central to all New Open Economy Macroeconomic (NOEM) models. On the one hand, hard pegs can provide the economy with a nominal anchor. On the other hand, a flexible exchange rate can act as a shock absorber to buffer the economy from external shocks in the presence of nominal rigidities (Obstfeld and Rogoff, 1996). A clear illustration of how stickiness interacts with a fixed-versus-floating choice is provided in the simple classical model of Reinhart, Rogoff, and Spilimbergo (2003). We extend this approach, and it is one we think quite suited for historical analysis. Indeed, history more closely resembles this stylized model than does the present. Current debate ranges over the merits of hard pegs, currency boards, and dollarization at one extreme, via adjustable pegs, crawling pegs, and dirty floats, to the idealized notion of the pure float. The debate is further complicated by the extent to which countries that claim to float actually fix and by the claim that any regime other than the “corner solutions” of hard peg or pure float is unsustainable.1 Fortunately, the past can more justifiably be reduced to the textbook fixed-floating dichotomy. Debate over exchange rate regimes a century ago was comparatively simple: to a first approximation, countries were either on the gold standard or they were floating. To be sure, there were a few vestiges of bimetallism or silver standards, but the gold standard countries by 1913 accounted for approximately 48% of countries, 67% of world GDP, and 70% of world trade.2 Gold had emerged as the dominant monetary regime of its time and as a robust nominal anchor. Why? The claim was made that it helped to promote international trade and investment, and the data now back it up.3 Small wonder, then, that after the violent disruptions of World War One the world anchored again to gold in the 1920s. Unfortunately, despite its past record for stability, the reconstituted gold standard failed; it is now generally thought to have exacerbated volatility and contributed substantially to the Great Depression (Kindleberger, 1973, Temin, 1989 and Eichengreen, 1992). One measure of this increased instability that we will study in this paper is the extent of real exchange rate volatility in the world economy. Why did an institution that had worked so well for decades become, in the 1920s, “unsafe for use” (Temin 1989, p. 10)? And what can history teach us about the present? In this paper we study theoretically and empirically the performance of the gold standard as a shock absorber, and find that the regime performed very differently at different times. The classical gold standard did not exacerbate real exchange rate volatility and coped well with terms-of-trade shocks. The interwar gold standard did not absorb these shocks so well, at a time when these shocks turned out to be quite large, and made real exchange rate volatility worse.

One of the unifying themes in global macroeconomic history concerns the shift in the adjustment process in the early twentieth century. It is widely believed that nominal rigidities increased, setting the stage for the Great Depression and the Keynesian revolution. But what is missing in the literature is systematic cross-country and cross-regime evidence, using consistent methods to evaluate the magnitude of these supposed changes. To help fill the gap we use theory to develop a new diagnostic test that can be applied to panel data from a large sample of countries. Changes in nominal rigidities can have implications for optimal monetary policy, as can be seen in a simple classical model, or even in more complex models. In the presence of external terms-of-trade shocks, these rigidities drive a small open economy away from its first-best. For plausible parameters these same rigidities also raise the volatility of the real exchange rate, providing us with an indirect test for the changing strength of such rigidities. The implied diagnostic test: did the ability of the gold standard to absorb terms-of-trade volatility worsen significantly between the prewar period and the interwar period as measured by real exchange rate volatility? Our comparative evidence, summarized in Fig. 3, suggests that it did. Two caveats must be offered. First, our model is an important guide, but is a simplification. That said, we believe the intuition will survive in many other models too. The basic point is robust. If an economy is fully flexible, there is no link between real and monetary outcomes, and the exchange rate regime should make no difference at all. Thus, even absent any specific model, the key results in Fig. 3 present a puzzle to be explained with respect to one important real linkage—the pass through of terms-of-trade shocks into real exchange rate shocks. The exchange rate regime seemed to make no difference before the war, but it did make a difference after the war. Why? Which parameters changed? Whatever models other scholars bring to the study of these data, this is a puzzle that must be confronted. Second, given the limitations of a simple model and panel econometrics, our findings should not be interpreted as a monocausal explanation of the failure of the interwar gold standard. The economic—and political—story is much more complex than that (Eichengreen 1992). Country experiences varied greatly, and this will not be captured in our panel coefficient estimates. Still, as argued by Temin (1989), a rigorous account requires attention to both impulse and propagation effects; he drew special attention to the major impulse given by the shock of World War One and its aftermath, which disturbed exchange parities and the global allocation of gold reserves. Our work draws attention to a potentially important change in the propagation mechanism. Before 1914, it seems the world economy had enough flexibility that it could ride out terms-of-trade shocks even on a hard peg, so that the benefits of shifting to a floating rate regime were rather small. By the 1920s, this kind of flexibility was in decline just as terms-of-trade volatility was on the rise—an unfortunate combination that surely played some part in a crisis that brought to an end the world's most durable fixed exchange rate regime.