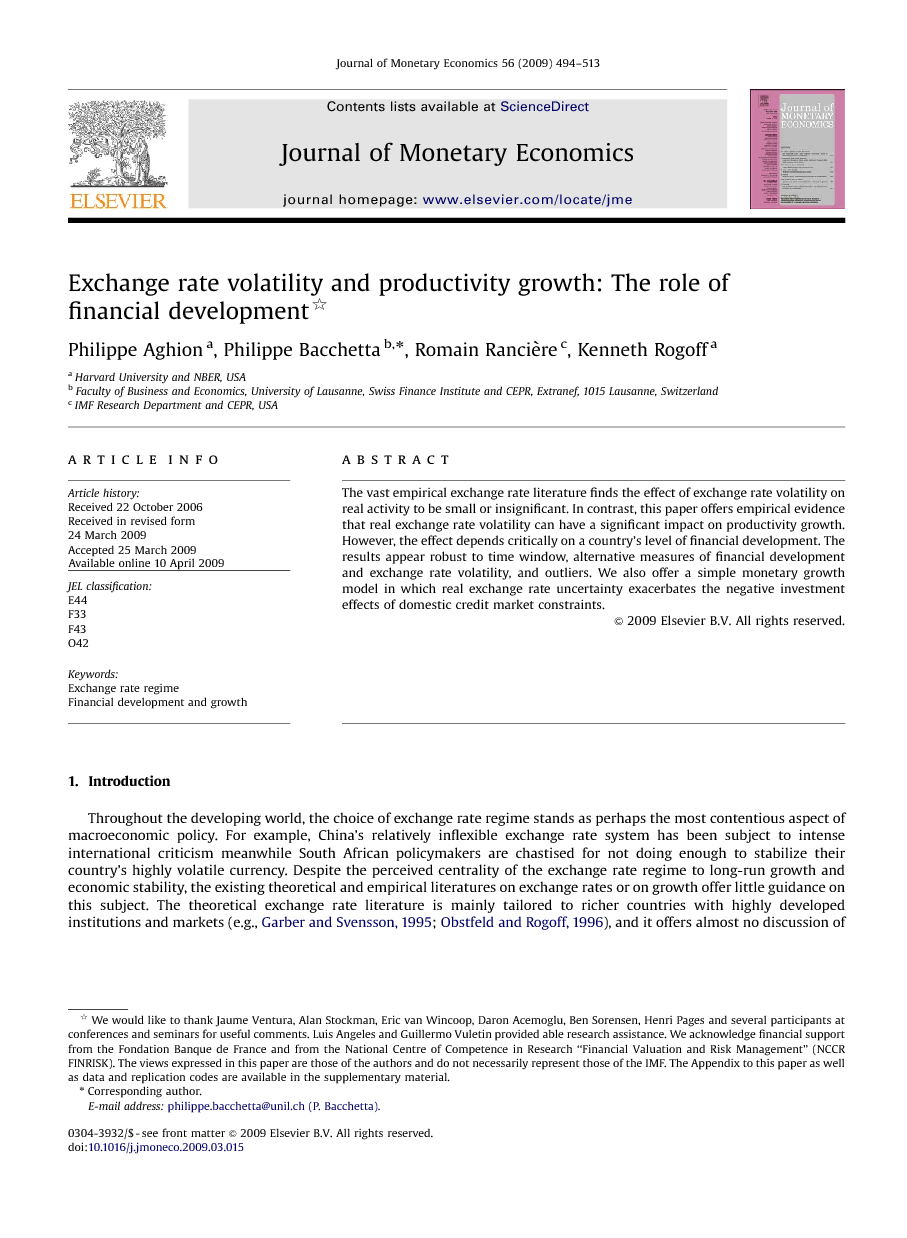 Throughout the developing world, the choice of exchange rate regime stands as perhaps the most contentious aspect of macroeconomic policy. For example, China's relatively inflexible exchange rate system has been subject to intense international criticism meanwhile South African policymakers are chastised for not doing enough to stabilize their country's highly volatile currency. Despite the perceived centrality of the exchange rate regime to long-run growth and economic stability, the existing theoretical and empirical literatures on exchange rates or on growth offer little guidance on this subject. The theoretical exchange rate literature is mainly tailored to richer countries with highly developed institutions and markets (e.g., Garber and Svensson, 1995; Obstfeld and Rogoff, 1996), and it offers almost no discussion of long-run growth. The empirical literature on exchange rates is largely negative, suggesting to some that the degree of exchange rate flexibility simply does not matter for growth, or for anything except the real exchange rate

The vast empirical literature following Baxter and Stockman (1989) and Flood and Rose (1995) generally finds no detectable difference in macroeconomic performance between fixed and floating exchange rate regimes. In this paper, we argue that instead of looking at exchange rate volatility in isolation, it is important to look at the interaction between exchange rate volatility and both the level of financial development and the nature of macroeconomic shocks. Our main hypothesis is that higher levels of excess exchange rate volatility can stunt growth, especially in countries with thin capital markets and where financial shocks are the main source of macroeconomic volatility. This hypothesis is shown to be largely validated by cross-country panel data, which thus provide fairly robust evidence suggesting the importance of financial development for the relationship between the choice of exchange rate regime and long-run growth.41 We also provide an explanation that rationalizes these results. Are our result at odds with the prescriptions of the standard exchange rate models? Not necessarily. The classical literature holds that the greater the volatility of real shocks relative to financial shocks in a country, the more flexible the exchange rate in that country should be. Our analysis shows that this prescription has to be modified to allow for the fact that financial market shocks are amplified in developing countries with thin and poorly developed credit markets. Clearly, more fully articulated structural models are needed to properly measure the trade-offs, which in turn remains an important challenge for future research.