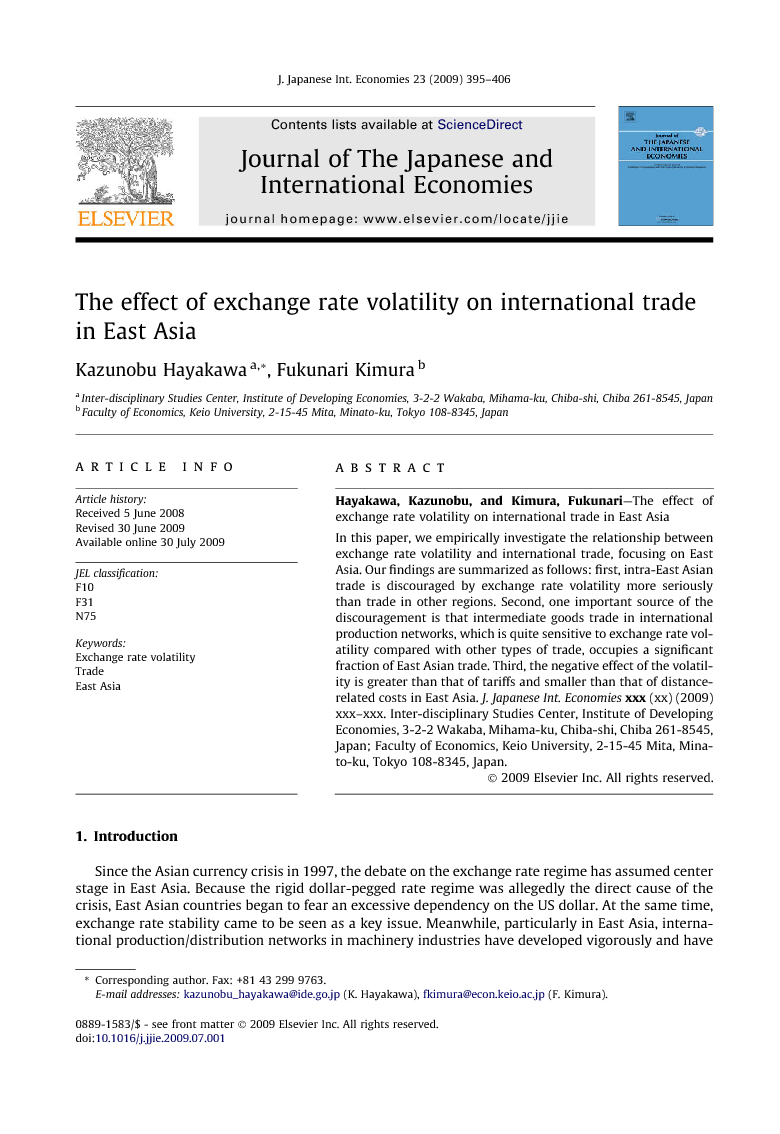 Since the Asian currency crisis in 1997, the debate on the exchange rate regime has assumed center stage in East Asia. Because the rigid dollar-pegged rate regime was allegedly the direct cause of the crisis, East Asian countries began to fear an excessive dependency on the US dollar. At the same time, exchange rate stability came to be seen as a key issue. Meanwhile, particularly in East Asia, international production/distribution networks in machinery industries have developed vigorously and have established their significance in each economy with extensive country coverage and structural sophistication. This development of international networks has led to a rise in the share of intra-regional trade in East Asia and has necessitated a stable exchange rate environment. One of the natural consequences of this has been the commencement of vigorous discussion on the possibility of a basket currency among East Asian countries. The academic literature neither theoretically nor empirically concludes whether or not the stability of the exchange market enhances international trade. There are a large number of theoretical and empirical studies that analyze the relationship between exchange rate volatility and international trade (see, for example, McKenzie, 1999 and Clark et al., 2004). As presented in McKenzie (1999), there are theoretical models supporting both negative and positive relationships between them. Empirical studies do not provide clear-cut results, either; most of the empirical results present a negative relationship, but this relationship is not always robust. Moreover, studies often find insignificant negative or positive relationships when employing other estimation methods such as instrument variable estimation or the introduction of fixed country effects. Previous empirical studies have investigated various hypotheses and subjected them to robustness checks. Some of the studies perform long-time series analyses and employ samples involving a large number of countries. Various kinds of volatility measures are employed in the literature, and furthermore, the volatility is sometimes decomposed into its anticipated part and unanticipated part by using a GARCH model. The endogeneity between exchange rate volatility and trade is addressed in the use of instruments. The studies also compare the impact of volatility on trade among developed countries with that among developing countries. These studies aim to examine the differences in the currency/exchange systems, or the availability of hedging instruments across countries, through investigating the impact of exchange rate volatility on international trade. Recently, moreover, Clark et al. (2004)1 compared the impact of volatility on trade in differentiated goods with that in homogenous goods. Our study intends to contribute to the literature by clarifying differences in the impact of exchange rate volatility among traded products or across trade structures. Particularly in the context of East Asia, we conduct the following analysis: first, we examine whether volatility has a greater discouraging impact on trade in East Asia than in other regions. Second, we attempt to quantify the degree to which volatility impedes international trade in East Asia compared with tariffs and distance-related costs (e.g., transportation costs). Third, we construct an unanticipated volatility measure different from those used in the previous literature and examine its impact on international trade. Unlike the volatility measures employed in the previous studies, this unanticipated volatility measure is constructed by using not only the past exchange rates but also the forecast of countries held by exchange market players (bankers). Fourth, we examine whether machinery parts trade is more sensitive to volatility than finished machinery products. The fourth element is especially important in the context of East Asia. The seminal paper in the fragmentation theory, Jones and Kierzkowski (1990), illustrates the mechanics of fragmentation in a static setting. It claims that fragmentation of production processes takes place when (i) production cost per se in fragmented production blocks can be substantially reduced and (ii) service link cost for connecting remotely located production blocks is not prohibitively high. If the reduction in production cost by fragmentation overweighs the service link cost incurred thereby, the firm breaks apart some of its production blocks to other remote locations, so as to attain a total cost reduction. In dynamic consideration, however, we must explicitly take into account the cost of network set-ups and network restructuring. Apart from pure spot-market-type transactions, transactions in production networks are relation-specific. Only a slight defect or delay of one single part may cause a serious malfunctioning of the whole production system, and thus firms carefully select credible business partners hooked up with reliable service links. Exchanges rates are one of the crucial elements that generate uncertainty in the competitiveness of business partners as well as service link costs. As a consequence, firms or production plants located in countries with high volatility in exchange rates are less likely to be incorporated into production networks. Indeed, some Japanese firms report that exchange rate stability is essential for back-and-forth transactions of intermediate goods in international production networks (Ito et al., 2008).2 On the other side of the coin, once production networks are in place, transactions become stable, which suggests the existence of network restructuring cost.3 There are also previous studies that focus special attention on East Asia, for example, Bénassy-Quéré and Lahrèche-Révil, 2003, Poon et al., 2005, Chit et al., 2008 and Thorbecke, 2008. While these papers employ different approaches, such as an error-correction model and panel data techniques, different sample period, and different sample countries, all these papers found a negative relationship between exports and exchange rate volatility in East Asia. Our paper is, in particular, closely related to Thorbecke (2008). He investigates how exchange rate volatility affects electronic parts and components exports within East Asia and finds that volatility does reduce trade in electronic parts and components within the region. On the other hand, this paper examines whether there are differences in the impact of the volatility between finished machinery goods and machinery parts. This investigation contributes to the enhancement of our understanding on the mechanics of international production/distribution networks. The reminder of this paper is organized as follows. Section 2 explains our empirical methodology and presents an overview of our volatility measure. Section 3 reports on our regression results, and Section 4 concludes our argument.