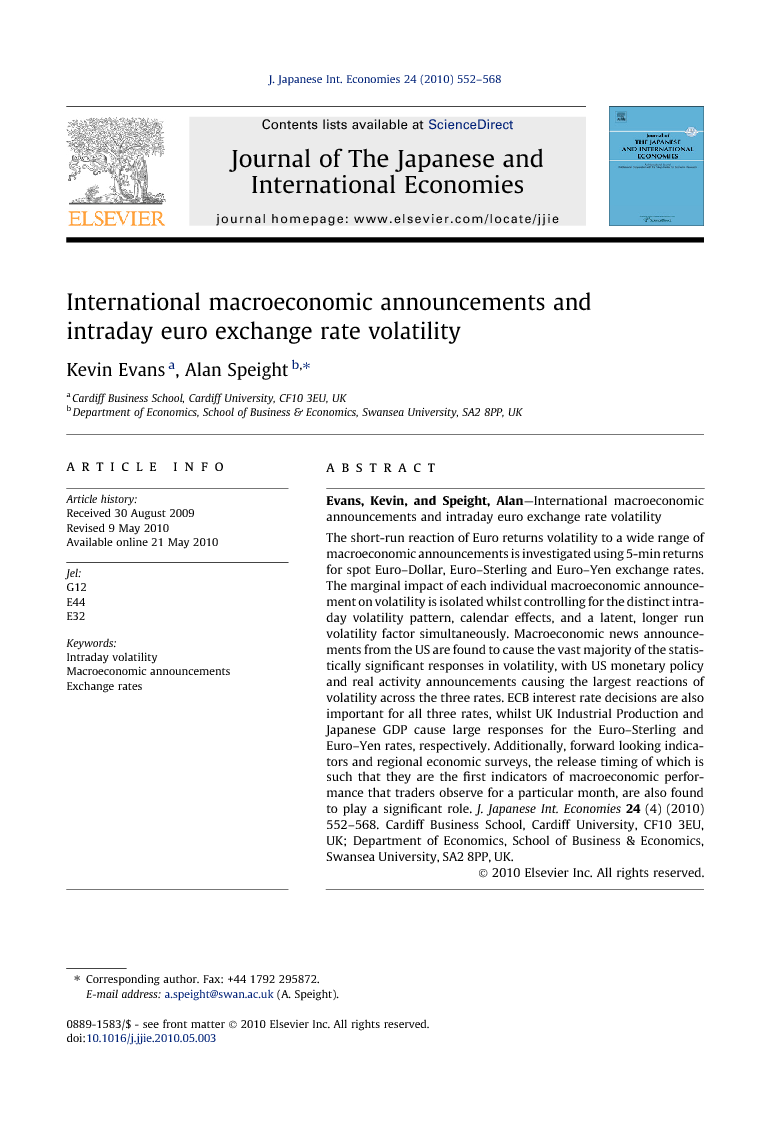 The short-run reaction of Euro returns volatility to a wide range of macroeconomic announcements is investigated using 5-min returns for spot Euro–Dollar, Euro–Sterling and Euro–Yen exchange rates. The marginal impact of each individual macroeconomic announcement on volatility is isolated whilst controlling for the distinct intraday volatility pattern, calendar effects, and a latent, longer run volatility factor simultaneously. Macroeconomic news announcements from the US are found to cause the vast majority of the statistically significant responses in volatility, with US monetary policy and real activity announcements causing the largest reactions of volatility across the three rates. ECB interest rate decisions are also important for all three rates, whilst UK Industrial Production and Japanese GDP cause large responses for the Euro–Sterling and Euro–Yen rates, respectively. Additionally, forward looking indicators and regional economic surveys, the release timing of which is such that they are the first indicators of macroeconomic performance that traders observe for a particular month, are also found to play a significant role.

Investigation of the way in which news about macroeconomic fundamentals is incorporated into asset prices, and the consequent characterisation of the price discovery process, lies at the heart of empirical finance literature concerned with market efficiency and market microstructure. One of the most successful innovations in the empirical study of market microstructure and price discovery in recent years has followed from the availability and application of high frequency data. Much of the advance in empirical work on high frequency asset return volatility stems from a series of seminal papers by Andersen and Bollerslev, 1997a, Andersen and Bollerslev, 1997b and Andersen and Bollerslev, 1998 that identify a component structure to high frequency returns volatility and rationalizes the stylised patterns observed in asset price volatility in terms of a theory of public information arrival. In particular, Andersen and Bollerslev (1997a) propose a general methodology for the extraction of the intraday periodic component of return volatility, whilst Andersen and Bollerslev (1998) provide a robust econometric methodology for capturing distinct volatility components and isolating macroeconomic announcement effects simultaneously. Specifically, Andersen and Bollerslev (1998) model the intraday periodicity and long-run dependence found in DEM–USD returns and isolate macroeconomic news as the remaining component of volatility. This method has also been applied by Andersen et al., 2000 and Bollerslev et al., 2000 to different market settings, including the Japanese stock market and the US Treasury bond market.1 However, very few other studies tackle the full complexity involved in the simultaneous modelling of all components of intraday volatility, and many discard valuable information relating to macroeconomic announcements by grouping release events into categories according to the type of announcement, or consider only a limited range of announcements.2 This paper therefore seeks to extend and appraise the earlier results of Andersen and Bollerslev (1998) and others for the DEM–USD to 5-min bid-ask quotes of the EUR–USD, which constitutes a new market that has yet to be investigated in this econometric framework, and using a far wider range of individual macroeconomic announcements across countries and economic conditions than has been considered hitherto in the literature.3 Thus, the dataset includes a broad selection of macroeconomic news announcements emanating from the US, Eurozone, Germany, France, UK and Japan to examine whether announcements regarding relative economic performance impact upon bilateral exchange rate volatility. Whilst there have been some studies investigating the effects of macroeconomic news relating to the US and German economies, very few consider the impacts of news from other countries. An important recent contribution to this literature by Hashimoto and Ito (2010) examines the impact of Japanese macroeconomic statistics on the USD–JPY exchange rate returns, volatility and volume. The paper reports a number of interesting findings: first, a number of announcement surprises have significant impact on returns, which, in some cases last for as much as 15 min; second, a number of (different) announcements increase the volatility of exchange rate returns; third, news announcements are associated with increased trading volume, even if the announcement does not deliver a surprise from consensus expectations. Hashimoto and Ito (2010) investigate the impact of news on the exchange rate using transaction data and order flow, which is an interesting, alternative method to the econometric approach adopted here.4 In addition to seeking to extend previous results for the DEM–USD exchange rate to a new sample period for its EUR–USD successor, we also provide complementary analyses for two of the other major exchange rates, namely the EUR–GBP and EUR–JPY, which have not yet been considered using the empirical methodology established in the recent high frequency empirical literature. It is also of interest to consider the EUR–GBP exchange rate given the status of the UK as an EU member but not a full participant in EMU, in order to determine whether different market microstructure effects prevail in that scenario. Further, the methodology adopted follows that pioneered by Andersen and Bollerslev (1998) in permitting the simultaneous modelling of the three principal volatility components associated with long memory, intra-day periodicity and macroeconomic announcement effects, as described above, but where the complexities of such news effects are more efficiently identified in terms of volatility response functions rather than the more common use of simple dummy variables associated with categories of grouped news events. Furthermore, the robustness of the results reported is assessed in relation to two different, alternative, means of filtering the intra-day periodicity component of volatility, namely the flexible Fourier form method previously applied in the literature and a cubic spline approach which has certain advantages in more closely modelling volatility peaks associated with the opening and closing of regional foreign exchange markets. The remainder of the paper is structured as follows. Section 2 describes the data and Section 3 describes the econometric modelling approach and briefly outlines the intra-day periodicity filters applied. Section 4 reports the empirical results for the statistical significance of individual macroeconomic announcement effects for each of the three bilateral Euro exchange rates under consideration. Section 5 summarizes our findings and conclusions.

This paper has sought to provide a comprehensive characterisation of Euro exchange rate volatility, focusing on the volatility response to a range of international macroeconomic announcements. The paper contributes to the literature in several ways. First, it uses 5-min bid-ask quotes of the Euro against the US Dollar, UK Pound sterling and Japanese Yen, which constitutes a new market that has yet to be investigated. Second, it considers a far wider range of announcements across countries and economic conditions than has been considered hitherto in the literature, and against a turbulent economic and geopolitical background. Third, the complexity of the volatility response to individual macroeconomic announcements is assessed through volatility response functions rather than the significance of simple dummy variables for categories of announcement type as typically applied in the previous literature. Fourth, the empirical methodology which permits simultaneous modelling of these announcement effects together with long-memory features and intra-day periodicity utilises two approaches to the modelling of the latter, namely the conventional FFF approach and an alternative method using cubic splines. The largest reactions of volatility across the three exchange rates are found to occur in response to US announcements. In a sample period of poor global economic performance, the decisions of the FOMC regarding US interest rates generate the largest instantaneous jumps in volatility and often the largest cumulative response over the period immediately following the announcement. Interest rate decisions by the ECB also feature prominently showing that monetary policy decisions are an important source of exchange rate volatility over the sample, which may have been confounded during the sample period by the ECB’s monetary policy reactions being difficult to predict accurately. In confirmation of previous studies, indicators of real activity such as the US Employment Report and GDP also cause dramatic price reactions, whilst similar measures for the UK (including UK Industrial Production), Eurozone, Germany and Japan are among the highest ranking non-US announcements. The US Trade Balance is also found to be important, causing a larger EUR–USD reaction than US inflation data. Aside from such traditional macroeconomic information, forward looking indicators and regional economic surveys are found to play a crucial and interesting role. These releases include the Philadelphia Federal Reserve Index, University of Michigan Consumer Sentiment Index, Chicago Purchasing Managers Index, Consumer Confidence Index and Institute of Supply Management Index for the US, and the IFO Business Expectations Index for Germany. The timing of these announcements is such that they are the first indicators of macroeconomic performance for a particular month that traders observe, and such releases are therefore likely to generate larger price reactions. By learning from this early information, subsequent announcements pertaining to the same month can be forecast with greater accuracy, such that subsequent announcements cause smaller deviations from expectations and hence do not cause such dramatic volatility movements. There are several possible avenues for further research. The data sample used in this study is particularly interesting as it covers a period of economic turbulence, geopolitical tension and episodes of monetary policy easing. However, it would be appealing to extend the sample to cover different phases of the business cycle in order to analyse whether markets react symmetrically to good and bad news and whether this reaction is symmetric during economic expansions and contractions. Given the importance of monetary policy reactions identified, it would also be interesting to relate any such asymmetric news effects to the reaction functions of monetary policy authorities. Finally, in the context of realised volatility models, the econometrics of quantifying and explaining volatility ‘jumps’ is an innovative area of empirical finance research and such ‘jump’ contributions to total volatility may be linked to macroeconomic announcements and news given the findings reported here.