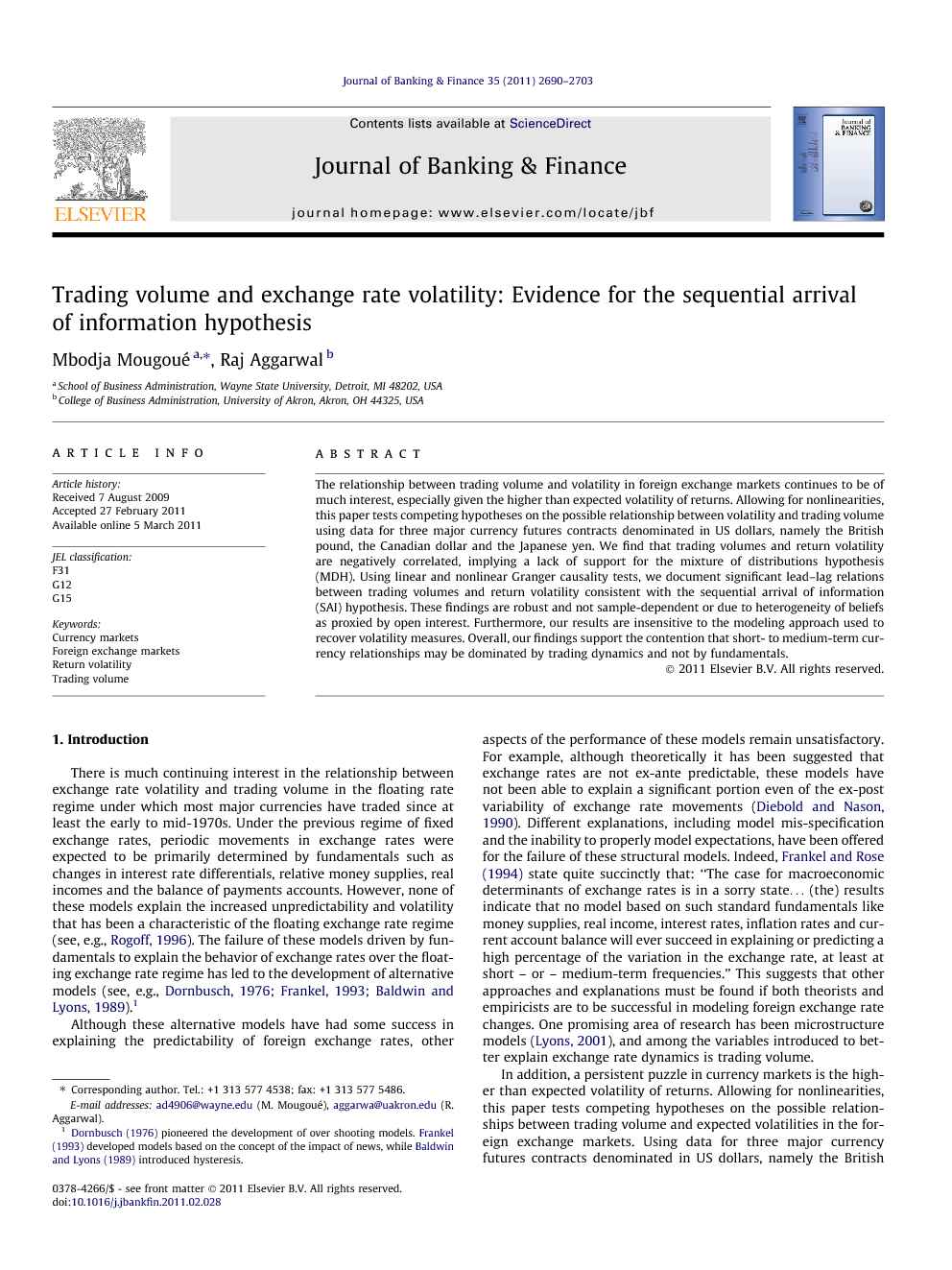 The relationship between trading volume and volatility in foreign exchange markets continues to be of much interest, especially given the higher than expected volatility of returns. Allowing for nonlinearities, this paper tests competing hypotheses on the possible relationship between volatility and trading volume using data for three major currency futures contracts denominated in US dollars, namely the British pound, the Canadian dollar and the Japanese yen. We find that trading volumes and return volatility are negatively correlated, implying a lack of support for the mixture of distributions hypothesis (MDH). Using linear and nonlinear Granger causality tests, we document significant lead–lag relations between trading volumes and return volatility consistent with the sequential arrival of information (SAI) hypothesis. These findings are robust and not sample-dependent or due to heterogeneity of beliefs as proxied by open interest. Furthermore, our results are insensitive to the modeling approach used to recover volatility measures. Overall, our findings support the contention that short- to medium-term currency relationships may be dominated by trading dynamics and not by fundamentals.

In spite of a voluminous literature, a persistent puzzle in currency markets is the higher than expected volatility of returns. The foreign exchange markets have been hard to model especially in the current floating rate regime for the major currencies. Structural models have been unable to explain the ex-post determinants of exchange rate volatility. While a relatively recent approach is to recognize the nonlinearity in exchange rate relationships, evidence on the predictability and presence of nonlinearities in the currency futures market is mixed. It has also been suggested that while structural models are inadequate, more market information, such as trading volume, be used in understanding exchange rate volatility. Futures markets in foreign exchange present some data opportunities in this regard not available in inter-bank markets. Thus, given the inadequacy of prior results, there is a need and an opportunity to re-examine the volume–volatility relationship in currency markets accounting for nonlinearities and using recent data and modern econometric techniques. Allowing for nonlinearities, this paper examines the possible role of trading volume in currency markets by examining the correlation and the lead–lag relation between daily trading volume and return volatility for three major currency futures contracts denominated in US dollars, namely the British pound, the Canadian dollar and the Japanese yen using daily data for a period of almost three decades. More specifically, this paper addresses three major questions. (1) Is there a positive contemporaneous relation between return volatility and trading volume in the foreign exchange market? (2) Is there Granger causality between trading volume and return volatility? (3) And if so, is it linear and/or nonlinear? Our results document that the contemporaneous relations between return volatility and trading volume for the British pound, Canadian dollar, and Japanese yen are significant but negative over the 1977–2009 sample period, implying a lack of support for the mixture of distributions hypothesis (MDH) that predicts a positive significant relation between the two variables. These findings are supported by linear and nonlinear Granger causality tests that also reveal a strongly significant bi-directional causality between return volatility and trading volume for each of the three currency futures contracts utilized in this study – evidence that is consistent with the sequential arrival of information hypothesis (SIA). We also provide evidence that the findings of bi-directional nonlinear causality could be due to heterogeneity of beliefs among traders. While our main findings are robust to the filtering of the data for this influence, the influence of volume seems to reflect the influence of heterogeneous reactions to new information in the foreign exchange markets. The robust results documented in this study are important in light of the failure of models based on macroeconomic fundamentals to explain foreign exchange movements in the short- to medium-term. Specifically, our findings suggest that in the short–medium terms, macroeconomic fundamentals are swamped in foreign exchange markets by short-run dynamics that arise from the trading process.