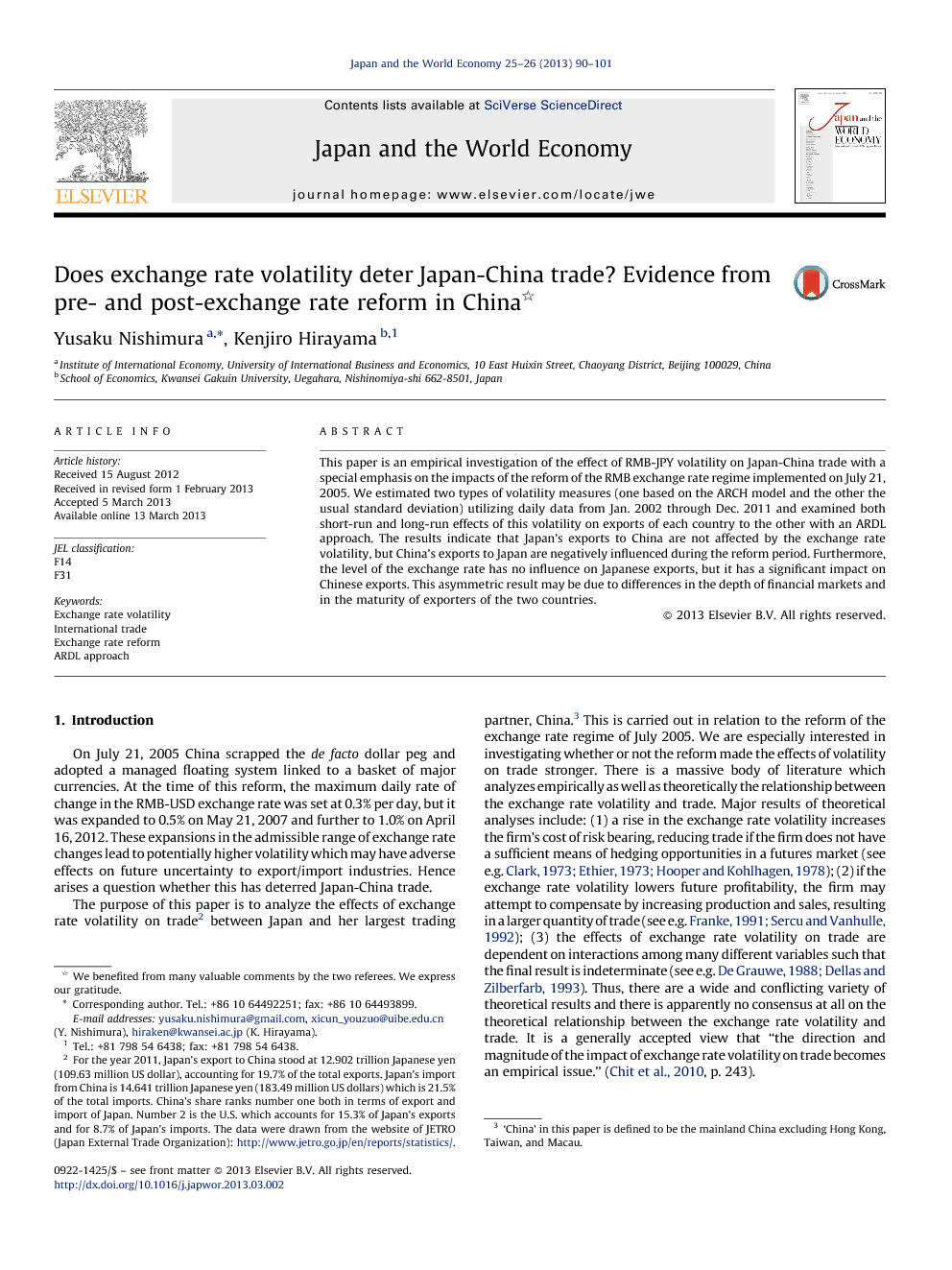 This paper is an empirical investigation of the effect of RMB-JPY volatility on Japan-China trade with a special emphasis on the impacts of the reform of the RMB exchange rate regime implemented on July 21, 2005. We estimated two types of volatility measures (one based on the ARCH model and the other the usual standard deviation) utilizing daily data from Jan. 2002 through Dec. 2011 and examined both short-run and long-run effects of this volatility on exports of each country to the other with an ARDL approach. The results indicate that Japan's exports to China are not affected by the exchange rate volatility, but China's exports to Japan are negatively influenced during the reform period. Furthermore, the level of the exchange rate has no influence on Japanese exports, but it has a significant impact on Chinese exports. This asymmetric result may be due to differences in the depth of financial markets and in the maturity of exporters of the two countries.

In this paper we have analyzed the effects of the volatility in the RMB-JPY rate on Japan-China trade with a special emphasis on the period after July 2005 when the exchange rate regime was reformed. Our sample period is from Jan. 2002 which is after China's accession to WTO to Dec. 2011 and we collected 120 monthly observations. We computed two measures of exchange rate volatility: the one is derived by AR-EGARCH model and the other is simply standard deviations of daily exchange rate changes during a given month. We then applied the ARDL approach to estimate short-run and long-run effects of various variables on China's and Japan's exports to each other. Our results indicate that Japan's exports to China are not affected by the volatility, but that China's exports to Japan were negatively affected by the volatility during the reform period. Therefore, China's reform of the exchange rate regime had adversary effects on her exports to Japan when the volatility was high. In other words, Chinese exporters are more prone to the exchange risk than Japanese counterparts. Next, the level of the RMB-JPY rate does not influence Japanese exports to China, but Chinese exports to Japan are affected by this level. In general, therefore, Chinese exports are subject to influences from the exchange rate. A rise in the volatility constitutes a higher exchange risk, which can be mitigated by hedging activities. Relative to more advanced nations, China has fewer such opportunities. Japan has had experiences of floating exchange rates since February 1973. Japan was often faced with phases of rapid JPY appreciation and had to develop new means of exchange risk hedging. It is only recently that China's currency gained any flexibility, hence the only risk hedging available is to use the forward market contracts. However, the depth of this forward market is far from sufficient.22 These differences in the depth of derivatives markets and in the risk management by firms seem to underlie the empirical results of this paper. That we cannot have the next three things at the same time is a well-known property of international finance: (1) completely free mobility of capital across borders (2) stability of the exchange rate and (3) independent monetary policy. The Chinese government has sacrificed the free international mobility of capital in order to preserve the stability of the exchange rate and independence of monetary policy. Recent policy changes in China regarding the RMB-USD rate include widening of the daily variability to 1% on April 16, 2012 and direct transactions between JPY and RMB in both Tokyo and Shanghai markets on June 1, 2012. As for the future liberalization of international capital flows, a special team at the Financial Survey and Statistics Department of People's Bank of China has published in February 2012 a roadmap of liberalization in the short, medium, and long run. These developments by the Chinese authorities seem to introduce wider flexibility in the exchange rate by allowing more free international capital flows while retaining the independence in their monetary policy. This is exactly the path many advanced economies took since the early 1970s. Implementation of these new policy moves will lead to increasing volatility in the RMB exchange rates. According to the results of this paper, this rise in exchange risk may have adverse effects on China's exports and hence China's economy in general. But, this will in turn have negative implications for Japanese exports to China. In any case, China has to develop a more flexible foreign exchange market which is accompanied by deep financial markets to provide better hedging opportunities to exporters and importers. Chinese firms are well advised to rationalize their operations and to improve international competitiveness by more active R&D in new technology. We have analyzed the effect of the exchange rate volatility on bilateral trade between China and Japan. It is found that the volatility has a negative impact on China's export to Japan after the exchange rate reform of July 2005. This may be partly explained by China's export destination was shifted from countries with high exchange rate volatility to those with low volatility. Analysis of bilateral trade cannot capture such a movement in a multi-country trade framework. In this vein, Hayakawa and Kimura (2009) present a very interesting result that intra-East Asia trade is discouraged by exchange rate volatility more seriously than trade in other regions. East and South East Asian countries seem to have developed closely linked production networks. Then, the effect of the exchange rate volatility on trade must take incorporate such close linkages. Such considerations are the important next step in our future analysis.