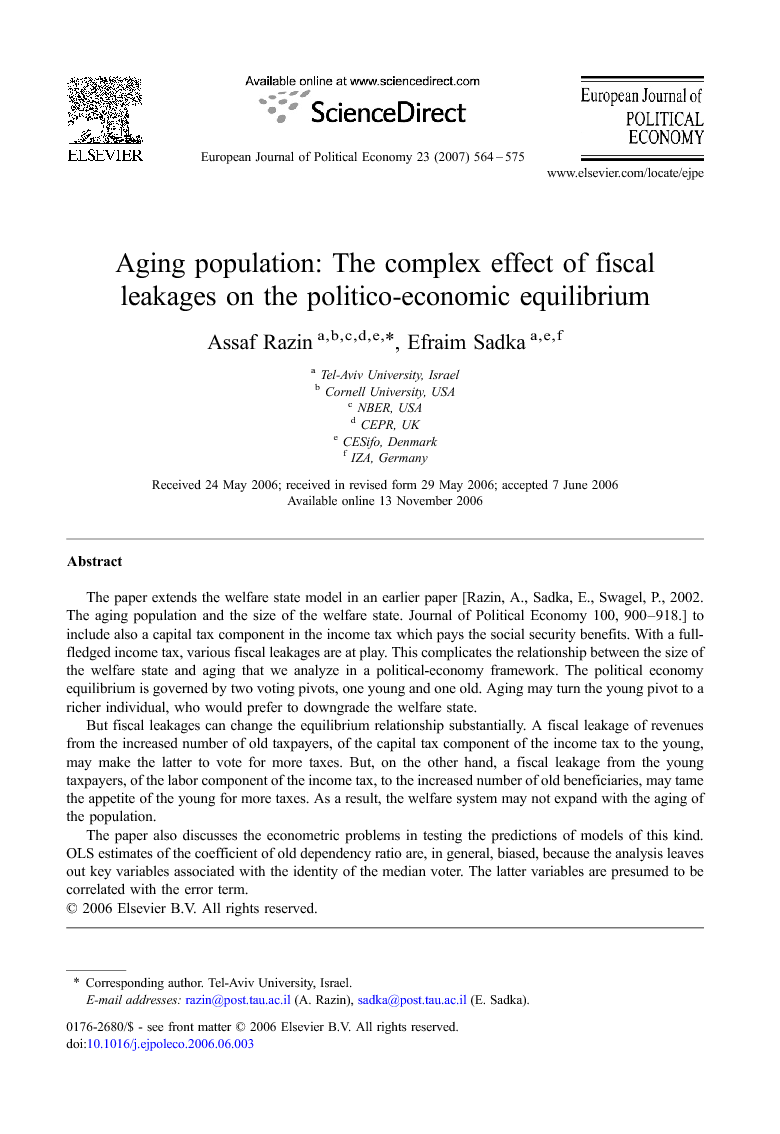 The paper extends the welfare state model in an earlier paper [Razin, A., Sadka, E., Swagel, P., 2002. The aging population and the size of the welfare state. Journal of Political Economy 100, 900–918.] to include also a capital tax component in the income tax which pays the social security benefits. With a full-fledged income tax, various fiscal leakages are at play. This complicates the relationship between the size of the welfare state and aging that we analyze in a political-economy framework. The political economy equilibrium is governed by two voting pivots, one young and one old. Aging may turn the young pivot to a richer individual, who would prefer to downgrade the welfare state. But fiscal leakages can change the equilibrium relationship substantially. A fiscal leakage of revenues from the increased number of old taxpayers, of the capital tax component of the income tax to the young, may make the latter to vote for more taxes. But, on the other hand, a fiscal leakage from the young taxpayers, of the labor component of the income tax, to the increased number of old beneficiaries, may tame the appetite of the young for more taxes. As a result, the welfare system may not expand with the aging of the population. The paper also discusses the econometric problems in testing the predictions of models of this kind. OLS estimates of the coefficient of old dependency ratio are, in general, biased, because the analysis leaves out key variables associated with the identity of the median voter. The latter variables are presumed to be correlated with the error term.

In an earlier study [Razin, Sadka and Swagel (2002); henceforth RSS] we analyzed in a stylized model the effect of the aging of the population on the size of the welfare state in a politico-economic context. We underscore the existence of two conflicting effects. On the one hand, the aging of the population strengthens the political clout of the pro-tax/social benefits coalition. Put differently, the median voter, generally a young working individual, is poorer and opt for more redistribution. On the other hand, there is the “fiscal leakage” effect: as the population ages, the young working median voter realizes that there are more individuals who share in her tax money, making her less receptive to raising taxes for social transfers. Thus, the effect of aging on the politico-economic equilibrium size of the welfare state depends on the relative strengths of these two conflicting effects. In RSS the welfare state is described by a stylized model in which taxes are collected from the labor income of the working young and transfers are offered uniformly to all, young and old alike. The uniform transfer captures on average the many types of transfers which are each not uniform, such as old-age security, health care, education, children allowances, etc. Some of these transfers favor the old and some — the young (through their children). If the number of children rises over time, then a greater portion of the total transfers goes to the young. This additional fiscal leakage by no means eliminates the fiscal leakage effect from the young to the old that aging causes and which is the key effect we aimed to unveil in RSS. Furthermore, in practice, the overall labor tax does not distinguish between (or earmarked separately for) the elderly and children; and benefits are not financed only by payroll taxes. Young families with many children may team up with the elderly on their support for the generosity of the welfare state. This is why it may be better to look at total dependency ratio than at merely the elderly dependency ratio. Another mechanism whereby aging tends to reduce the size of the welfare state is offered in Razin and Sadka (2005). Consider a pay-as-you-go, old-age social security system in which the working young pay social security contributions in order to finance old-age benefits paid only to the retired old.1 At each point in time, the young are willing to vote for paying taxes even though the tax revenues are used entirely to pay for the old, only because they expect the young of the next generation to do likewise for them, when they grow to become old and retire. The expected future aging of the population puts such a social security system under strain. The burden of financing the pension benefits to the old falls on fewer young shoulders, when population ages. Thus, if the fertility of the young falls below the fertility rate of their parents, then the share of the old in the next period will rise. The current young expects the next young generation to reduce the benefit it pays to the old (current young) generation. That is, the current young generation expects a smaller benefit than it actually pays to the current old. As a result, the expected future aging of the population triggers the current young to vote for lower benefits (and taxes) for the current old. This incentive persists for the next generations, self-validating the expectations for lower benefits caused by aging. In practice, taxes are levied both on labor and on capital. As the old are the major holders of capital, the overall burden of taxes falls on both the young and the old. This gives rise to fiscal leakages in various directions in the wake of aging, depending on the type of taxes. In the next section we develop a stylized model of a welfare state with both capital and labor taxes in order to elicit these leakages when population ages.

In order to illustrate the problems in testing the predictions of the various voting models, we confine attention to the basic RSS labor tax model. We referred specifically to two conflicting factors which determine how the tax rate changes when population ages: the change in the median voter and the fiscal leakage effect. In order to isolate the effect of aging on the tax rate through the fiscal leakage mechanism, specify the following equation: equation(18) τ=α+βx+γy+δz+θv+ε,τ=α+βx+γy+δz+θv+ε, Turn MathJax on where: x — elderly dependence ratio, y — child dependency ratio, z — a political economy measure proxying the median voter (say, a rise in z, means a richer median voter). v — a vector of other control variables. Now, if only x is included in the regression, as an explanatory variable (in addition to v), then we have two left out variables, y and z. We know [see, for instance, Gujarati (1995)] that in this case the OLS estimate of β is biased. The magnitude of the bias is a function of the true coefficients of the left out variables and the sample correlations between these variables and the error term (ϵ). For instance, if, as in our theory, δ is negative, and if the sample correlation between z and the error term is negative, then the OLS estimate of β is biased upward. Furthermore, even if we had a good proxy for the median voter (z), then we would still face serious problems, because z is jointly determined with x, y, and, in particular, τ. We would have therefore needed a good instrument for z. This was unavailable to RSS as to Disney (2007-this issue). This is why we viewed the analysis of the data in RSS as merely illustrative: “We show that the data are broadly consistent with the specific structural model of the theory. The empirical results must thus be seen as only suggestive, particularly since the regressions do not test against alternative mechanism” (RSS, p. 911). The main objective of RSS was to underscore theoretically the fiscal leakage effect. The latter may be quite complex, but, as we show here, its politico-economic existence in the wake of aging remains intact.