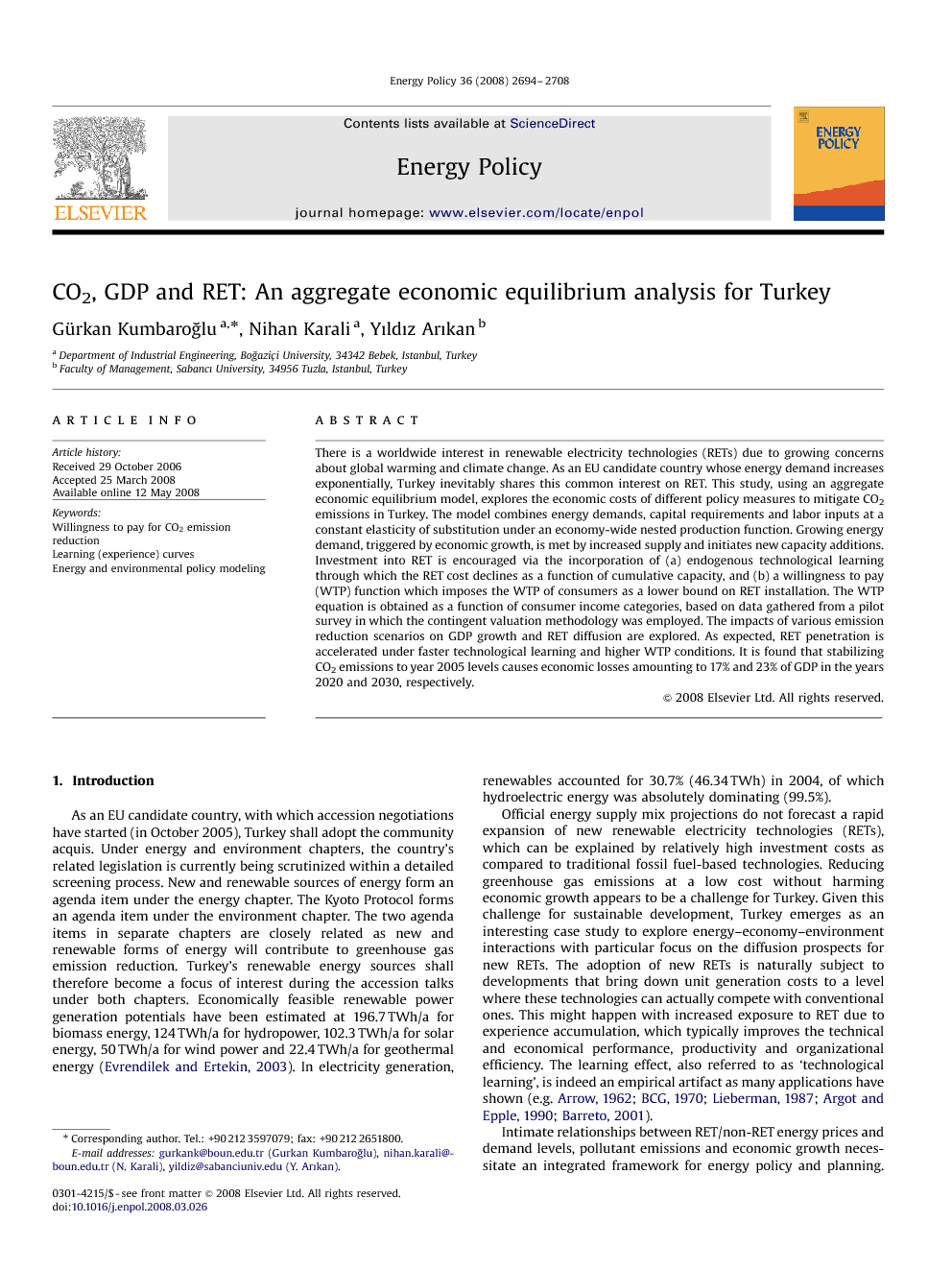 There is a worldwide interest in renewable electricity technologies (RETs) due to growing concerns about global warming and climate change. As an EU candidate country whose energy demand increases exponentially, Turkey inevitably shares this common interest on RET. This study, using an aggregate economic equilibrium model, explores the economic costs of different policy measures to mitigate CO2 emissions in Turkey. The model combines energy demands, capital requirements and labor inputs at a constant elasticity of substitution under an economy-wide nested production function. Growing energy demand, triggered by economic growth, is met by increased supply and initiates new capacity additions. Investment into RET is encouraged via the incorporation of (a) endogenous technological learning through which the RET cost declines as a function of cumulative capacity, and (b) a willingness to pay (WTP) function which imposes the WTP of consumers as a lower bound on RET installation. The WTP equation is obtained as a function of consumer income categories, based on data gathered from a pilot survey in which the contingent valuation methodology was employed. The impacts of various emission reduction scenarios on GDP growth and RET diffusion are explored. As expected, RET penetration is accelerated under faster technological learning and higher WTP conditions. It is found that stabilizing CO2 emissions to year 2005 levels causes economic losses amounting to 17% and 23% of GDP in the years 2020 and 2030, respectively.

As an EU candidate country, with which accession negotiations have started (in October 2005), Turkey shall adopt the community acquis. Under energy and environment chapters, the country's related legislation is currently being scrutinized within a detailed screening process. New and renewable sources of energy form an agenda item under the energy chapter. The Kyoto Protocol forms an agenda item under the environment chapter. The two agenda items in separate chapters are closely related as new and renewable forms of energy will contribute to greenhouse gas emission reduction. Turkey's renewable energy sources shall therefore become a focus of interest during the accession talks under both chapters. Economically feasible renewable power generation potentials have been estimated at 196.7 TWh/a for biomass energy, 124 TWh/a for hydropower, 102.3 TWh/a for solar energy, 50 TWh/a for wind power and 22.4 TWh/a for geothermal energy (Evrendilek and Ertekin, 2003). In electricity generation, renewables accounted for 30.7% (46.34 TWh) in 2004, of which hydroelectric energy was absolutely dominating (99.5%). Official energy supply mix projections do not forecast a rapid expansion of new renewable electricity technologies (RETs), which can be explained by relatively high investment costs as compared to traditional fossil fuel-based technologies. Reducing greenhouse gas emissions at a low cost without harming economic growth appears to be a challenge for Turkey. Given this challenge for sustainable development, Turkey emerges as an interesting case study to explore energy–economy–environment interactions with particular focus on the diffusion prospects for new RETs. The adoption of new RETs is naturally subject to developments that bring down unit generation costs to a level where these technologies can actually compete with conventional ones. This might happen with increased exposure to RET due to experience accumulation, which typically improves the technical and economical performance, productivity and organizational efficiency. The learning effect, also referred to as ‘technological learning’, is indeed an empirical artifact as many applications have shown (e.g. Arrow, 1962; BCG, 1970; Lieberman, 1987; Argot and Epple, 1990; Barreto, 2001). Intimate relationships between RET/non-RET energy prices and demand levels, pollutant emissions and economic growth necessitate an integrated framework for energy policy and planning. The literature covers various modeling techniques for numerical policy analysis, ranging from linear programming to mixed complementarity programming. There is a great variety of approaches and methodologies used in energy and environmental policy modeling. However, even though the approaches are quite different with respect to the structure and focus of models, there is a common core that inherits some optimization methodology. There are two broad classes of models describing the relationships between the energy sector and the rest of the economy: top-down and bottom-up. The first category approaches the problem from a macro-economic perspective with an aggregate energy sector representation, whereas the second one adopts a technology-rich description of energy activities including cost structures, conversion efficiencies and technological limitations from primary to final energy. The top-down label derives from how modelers apply economic theory and techniques to historical data on consumption, prices, incomes and factor costs to model supply and final demand. Therefore, top-down models evaluate the system from an economic viewpoint, in contrast to bottom-up models which consider energy systems and conversions in detail from an engineering viewpoint. In this study, a top-down policy analysis model computing an aggregate economic equilibrium (AEE) is developed and calibrated for Turkey. Accounting of the consumer willingness to pay (WTP) for CO2 emission reduction and endogenized technological learning for new RETs are two particular strengths of the model. The impacts of various energy and environmental policy scenarios on CO2 emissions, GDP growth and RET diffusion are explored. GDP losses are interpreted as the economic costs of emission reductions. Yet the corresponding benefits are considered to be beyond the scope of this study. The theoretical background of the model is discussed in the next section introducing the AEE approach, the methodology for determining WTP and the theory of technological learning. Section 3 provides the model description. The empirical analysis and model results are presented in Section 4. Finally, Section 5 concludes the study.

In this paper, an AEE model is developed and calibrated to explore the economic costs of different policy measures to mitigate CO2 emissions in Turkey. Interactions between the energy sector, economic growth and CO2 emissions are investigated with respect to various environmental scenarios. The model incorporates technological learning effects for RETs, reducing their cost as installed capacity increases. Based on a curve derived from a pilot survey application, the WTP of consumers for CO2 emission reduction is also taken into consideration. In addition to a Base Case (BAU), a number of environmental scenarios are defined restricting CO2 emissions under varying WTP and RET cost trajectories. Model results suggest various useful policy implications for an environmentally and economically sustainable development of the country and provide long-term prospects for effective and applicable energy policy solutions to foster investment into new RETs. Results show that emission reductions significantly affect economic growth and induce technological changes in the energy supply mix. The GDP losses in the Emission Stabilizing Scenario (scenario ESS), where emissions are stabilized at year 2005 levels, amount to 17% and 23% of GDP (compared to the Base Case) in the years 2020 and 2030, respectively. This corresponds roughly to 164 billion dollars in 2020 and 363 billion dollars in 2030. The economic costs are due to major changes in the technological structure of the energy system. Fossil fuel utilization almost halves in 2030. The shrinkage in fossil fuel use leads to significant increase (nearly 30%) in the installation of RETs, particularly hydroelectric power plants. Natural gas faces an accelerated growth as a relatively clean energy source. These findings indicate that new technological investments, financial assistance and targeted policies are inevitable for a sustainable evolution of the energy sector. When the learning rates for new RETs are doubled (scenario RES), RET penetration increases compared to ESS. However, the share of RETs in the total energy supply mix remains very small so that the GDP losses due to emission restrictions are not reduced. When the annual income growth is doubled (scenario SUS1), usage of new RETs is encouraged through the increase in WTP with negligible impact on economic growth and on the conventional energy mix. A doubling of both learning rates and income growth in SUS1 implies that the share of new RETs in total energy supply increases by 41% in 2020 and almost fourfold (171%) in 2030 (compared to the Base Case). Sensitivity analysis with alternative values of WTP for new RETs shows that the net effect is to decrease or increase new RET consumption as WTP becomes lower or higher, respectively. Impacts on economic growth and the conventional energy mix remain almost unchanged. These findings indicate useful hints for energy and environmental policy makers so as to steer the country into a path of sustainable development. The economic costs of emission limitation are caused due to the necessity for expensive new technology investments to meet increased demand. Therefore, for a cost-effective reduction of CO2 emissions in Turkey, it might be wise to give policy priority to limit the increase in demand (e.g. through energy efficiency improvements, increased energy conservation or lifestyle changes). Another option (which is beyond the scope of the current model setting) to reduce the economic cost of new technology investments in Turkey might be to issue emission reduction certificates and sell them in the international marketplace at a price that reduces the cost of clean technologies to a level competitive with conventional fossil-based technologies. It should be noted that the possibility of emissions trading is not included in this study as this is currently no option for Turkey. However, should Turkey ratify the Kyoto Protocol under a position so as to sell emission certificates, than the dream of an economically and environmentally sustainable development of the country could become a reality. Obviously, there are various environmental, social and economic benefits of emission reductions. However, calculating these benefits calls for a totally different modeling framework that is considered beyond the scope of this study. The exogenous calculation of benefits from each scenario enabling a cost-benefit analysis is possible. Finally, as further research, it is necessary to widen the survey application so that the WTP equation is derived on the basis of a more solid empirical database. Another direction for model refinement is the endogenizing of income growth. Establishment of a linkage between income classes in the WTP function and other economic indicator variables