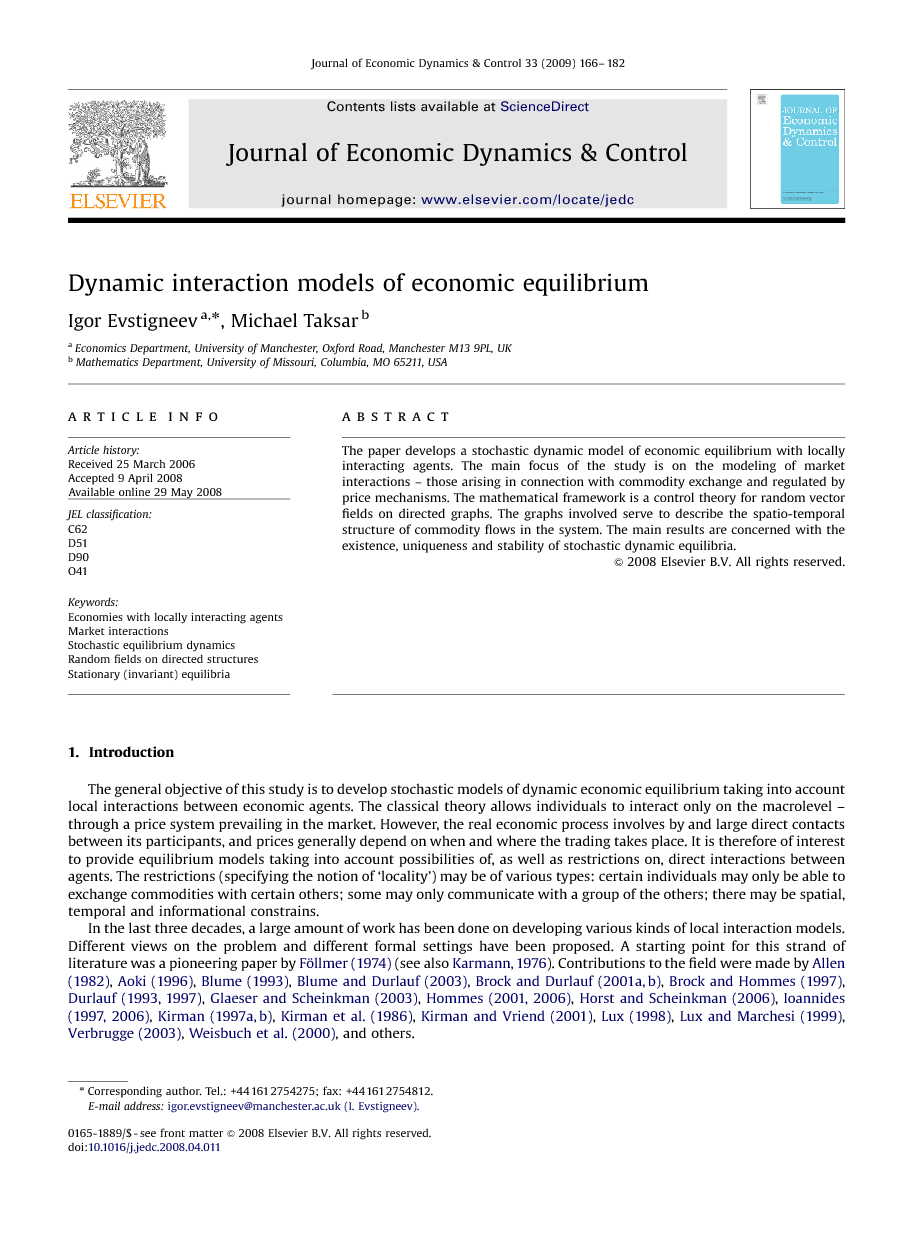 The paper develops a stochastic dynamic model of economic equilibrium with locally interacting agents. The main focus of the study is on the modeling of market interactions – those arising in connection with commodity exchange and regulated by price mechanisms. The mathematical framework is a control theory for random vector fields on directed graphs. The graphs involved serve to describe the spatio-temporal structure of commodity flows in the system. The main results are concerned with the existence, uniqueness and stability of stochastic dynamic equilibria.

The focus of this work is on stochastic dynamic models of economic equilibrium taking into account local interactions between economic agents. The approaches currently prevailing in the literature on this topic aim basically at the analysis of social (non-market) interactions and rely upon the well-developed mathematical techniques of Gibbs fields on undirected graphs. The present study pursues an approach different both in its applied focus and in the mathematical frameworks used. We are primarily interested in the analysis of market interactions (involving commodity flows and regulated by prices) and deal with much less explored mathematical objects such as random fields on directed structures. The general objective of this line of research is to integrate – within a framework of stochastic local interaction models – general equilibrium theory and the theory of economic growth. Studies in this direction (in different frameworks, not involving local interactions) were undertaken by Polterovich (1978) and Bewley, 1981 and Bewley, 1982. We consider models including the one studied by Polterovich as a special case. A characteristic feature of these models is a departure from one of the principles of the ‘orthodox’ equilibrium theory – utility maximization subject to budget constraints. Instead, general demand functions, not necessarily generated by utility maximization, are considered. Appropriate assumptions, such as a vector version of monotonicity (the Law of Demand, see Hildenbrand, 1994), are imposed on these functions. This approach makes it possible to establish the existence, uniqueness and turnpike properties of steady states (invariant equilibria) in stochastic, generally infinite-dimensional, settings. The main focus of the theory of economic growth is on models with infinite time horizons (see, e.g., Dana et al., 2006). Such models make it possible to abstract from the issue of choice of a control horizon and avoid problems related to ‘end effects’. The extension of this approach to dealing with local interactions requires the consideration of infinite graphs describing the spatio-temporal structure of interactions between economic agents. Frameworks of this kind are well suited for the analysis of not only stationary (time-homogeneous) equilibrium paths, but also invariant equilibria possessing properties of spatial homogeneity. In our previous work, we dealt with finite graph models. This paper extends the previous results to infinite graph models and thus makes a significant step toward the realization of the present research program.