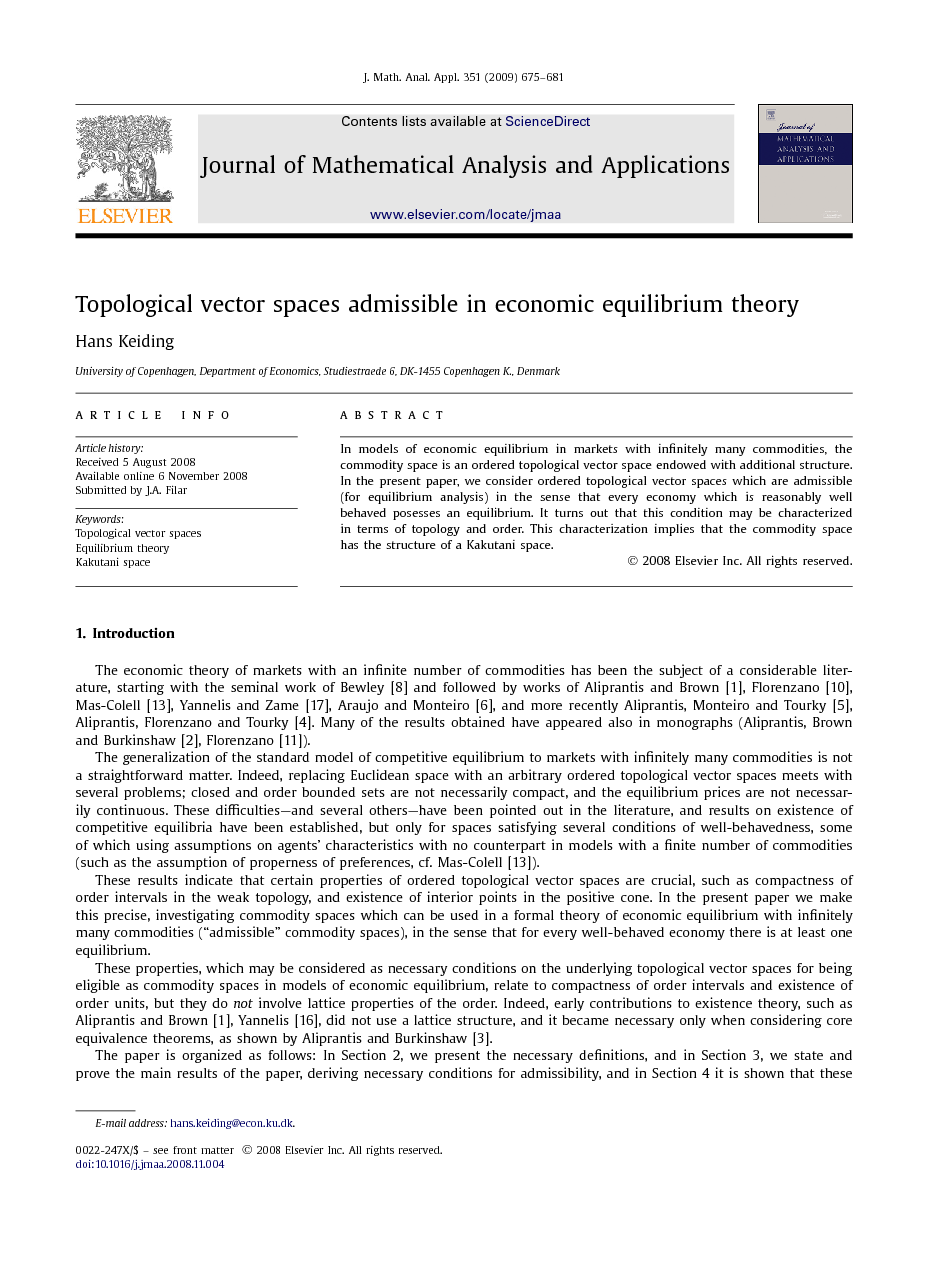 In models of economic equilibrium in markets with infinitely many commodities, the commodity space is an ordered topological vector space endowed with additional structure. In the present paper, we consider ordered topological vector spaces which are admissible (for equilibrium analysis) in the sense that every economy which is reasonably well behaved posesses an equilibrium. It turns out that this condition may be characterized in terms of topology and order. This characterization implies that the commodity space has the structure of a Kakutani space.

The economic theory of markets with an infinite number of commodities has been the subject of a considerable literature, starting with the seminal work of Bewley [8] and followed by works of Aliprantis and Brown [1], Florenzano [10], Mas-Colell [13], Yannelis and Zame [17], Araujo and Monteiro [6], and more recently Aliprantis, Monteiro and Tourky [5], Aliprantis, Florenzano and Tourky [4]. Many of the results obtained have appeared also in monographs (Aliprantis, Brown and Burkinshaw [2], Florenzano [11]). The generalization of the standard model of competitive equilibrium to markets with infinitely many commodities is not a straightforward matter. Indeed, replacing Euclidean space with an arbitrary ordered topological vector spaces meets with several problems; closed and order bounded sets are not necessarily compact, and the equilibrium prices are not necessarily continuous. These difficulties—and several others—have been pointed out in the literature, and results on existence of competitive equilibria have been established, but only for spaces satisfying several conditions of well-behavedness, some of which using assumptions on agents’ characteristics with no counterpart in models with a finite number of commodities (such as the assumption of properness of preferences, cf. Mas-Colell [13]). These results indicate that certain properties of ordered topological vector spaces are crucial, such as compactness of order intervals in the weak topology, and existence of interior points in the positive cone. In the present paper we make this precise, investigating commodity spaces which can be used in a formal theory of economic equilibrium with infinitely many commodities (“admissible” commodity spaces), in the sense that for every well-behaved economy there is at least one equilibrium. These properties, which may be considered as necessary conditions on the underlying topological vector spaces for being eligible as commodity spaces in models of economic equilibrium, relate to compactness of order intervals and existence of order units, but they do not involve lattice properties of the order. Indeed, early contributions to existence theory, such as Aliprantis and Brown [1], Yannelis [16], did not use a lattice structure, and it became necessary only when considering core equivalence theorems, as shown by Aliprantis and Burkinshaw [3].The paper is organized as follows: In Section 2, we present the necessary definitions, and in Section 3, we state and prove the main results of the paper, deriving necessary conditions for admissibility, and in Section 4 it is shown that thesenecessary conditions are also sufficient. Section 5 gives a characterization of the admissible commodity spaces for vector lattices, and finally Section 6 contains some concluding comments on the approach and the results.

In the present work, we have considered necessary and sufficient conditions on commodity spaces for existence of equilibria, formulated by the condition that every well-behaved economy should posess an equilibrium. Clearly, our approach hinges upon what is considered as a well-behaved economy. Some properties seem reasonable (convexity and irreflexibility of preferences, weak survival conditions on endowments), other conditions, such as continuity conditions on preferences, are less clear. We have chosen a weak notion of well-behavedness, making the class of well- behaved economies rather large and thereby possibly restricting the family of admissible commodity spaces. Working with a smaller class of economies, for example those where all consumers satisfy a properness assumption on preferences, could result in a larger class of commodity spaces. On the other hand, we allow for non-continuous prices in the definition of a quasi-equilibrium. Clearly, if a commodity space is not admissible, then a fortiori there are economies with no equilibria such that prices are continuous; however, this may happen also for commodity spaces which are admissible. It may be conjectured that one has to restrict the sampling of economies to a class much smaller than the well-behaved economies of the present work in order to have continuous equilibrium prices, but this remains a matter of further research.