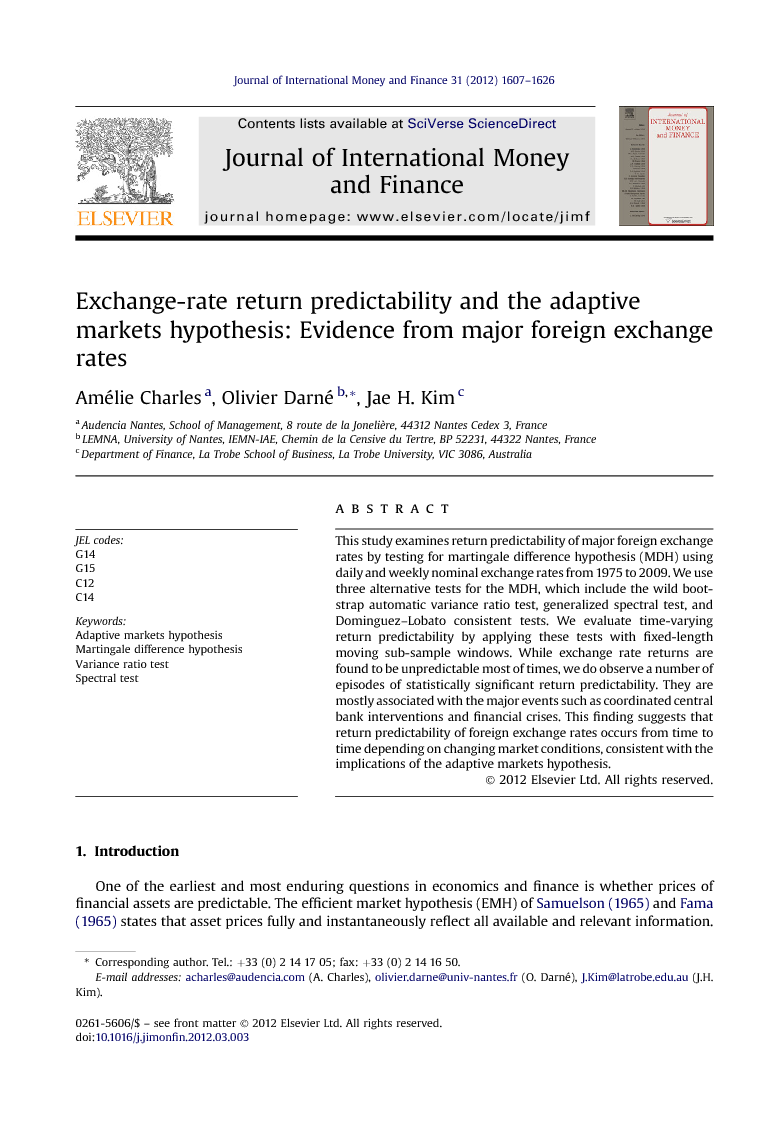 One of the earliest and most enduring questions in economics and finance is whether prices of financial assets are predictable. The efficient market hypothesis (EMH) of Samuelson (1965) and Fama (1965) states that asset prices fully and instantaneously reflect all available and relevant information. Since price adjustment to a new piece of information is instantaneous and accurate, the returns cannot be predicted. As a result, prices in an efficient market follow a random walk or a martingale process.1 Under the weak-form efficiency where the information set consists of past prices and returns, future prices and their returns are purely unpredictable based on past price information. Most of the studies for the EMH on financial markets have tested whether the returns follow a martingale difference sequence (MDS), where the returns are uncorrelated with the past values. If the foreign exchange market is weak-form efficient, the nominal exchange rate follows a martingale sequence and its returns are purely unpredictable based on past price and return information. For these reasons, the return predictability has been an important issue related to the market efficiency in the weak-form. There are several alternatives explanations for predictability in foreign exchange markets: (i) the prices in these markets do not quickly adjust to the new information (Fama, 1970; Melvin, 2004); (ii) the exchange rates are not set at the equilibrium level due to distortions in the pricing of capital and the valuing of risk (Smith et al., 2002); (iii) the emergence of a parallel/black market due to the existence of the exchange rate controls and resulting divergence between the equilibrium rate and the official rate (Diamandis et al., 2007); (iv) the exchange rate regime and regulatory arrangements, as they may affect the degree of foreign banks to access the foreign exchange markets and products; (v) the overshooting or undershooting phenomenon of exchange rates (Liu and He, 1991); and (vi) the central bank intervention (Dominguez and Frankel, 1993; Yilmaz, 2003; Beine et al., 2009).2 There have been numerous studies that tested the MDH in major foreign exchange rates. Since Meese and Rogoff (1983) showed that the structural models of exchange rate determination provide inferior out-of-sample forecasts to those implied by an MDS, many studies strived to uncover the empirical regularities in exchange rate behavior. In the literature, several alternative methods have been used to test for martingale behavior, including autocorrelation tests (Box and Pierce, 1970; Ljung and Box, 1978), variance ratio tests (Lo and MacKinlay, 1988, 1989), and spectral tests (Durlauf, 1991; Hong, 1996) and their improved modifications.3 These methods have been used in many empirical applications on foreign exchange rates: see Hsieh (1988), Liu and He (1991), Fong et al. (1997), Wright (2000), Lobato et al. (2001), Yilmaz (2003), Kuan and Lee (2004), Escanciano and Velasco (2006) and Escanciano and Lobato (2009a, 2009b), among others. However, the results are overall mixed and scattered over numerous studies that use different sample periods (often outdated), methods (often one type of methodology) and data frequencies (weekly or daily). Recently, Lo, 2004 and Lo, 2005 proposed the adaptive markets hypothesis (AMH), which gives a framework to reconcile the EMH with the notion of bounded rationality.4 An important implication of the AMH is that return predictability may arise time to time, due to changing market conditions (cycles, bubbles, crashes, crises …) and institutional factors. For the foreign exchange markets, a number of studies found that changing market conditions, caused by the events such as coordinated central bank intervention (LeBaron, 1999; Jeon and Lee, 2002; Yilmaz, 2003), Asian financial crisis (Jeon and Seo, 2003; Ahmad et al., 2011; Al-Khazali et al., 2011, 2012), and the global financial crisis (Ahmad et al., 2011), can affect market efficiency and other market features. These events have strong implications for the psychology of market participants and the way they incorporate new information to prices, which in turn may generate time variation in serial correlation of returns. In view of Lo's (2004, 2005) AMH, it is highly likely that the degree of return predictability is driven largely by such dynamic market conditions. Lim and Brooks (2010) reviewed the studies for time-varying weak-form market efficiency in stock returns and categorized them into three approaches: (i) non-overlapping sub-period analysis, (ii) time-varying parameter model, and (iii) rolling estimation window. In this study, we use the approach of moving sub-sample window to capture the dynamically changing return predictability under the AMH. To the best of our knowledge, Yilmaz (2003), Chiang et al. (2010), Belaire-Franch and Contreras (2011), and Chuluun et al. (2011) are the only studies that evaluate the MDH using time-varying measures in foreign exchange rates, but without an explicit link with the AMH. The aim of this paper is to evaluate the evolution of return predictability of the major foreign exchange rates and to examine whether its evolution is consistent with the AMH. This study is based on an extensive sample of daily and weekly data for major foreign exchange rates over the period 1974–2009, which cover the periods of major coordinated central bank interventions and financial crises. We measure the degree of return predictability using three alternative tests for the MDH, namely the wild bootstrap automatic variance-ratio test of Kim (2009), the generalized spectral shape test of Escanciano and Velasco (2006), and the consistent tests of Dominguez and Lobato (2003). These tests are capable of detecting linear and non-linear dependence, being robust to non-normality and conditional heteroscedasticity that are typical features of foreign exchange rates (see, for details, Charles et al., 2011). The remainder of this paper is organized as follows: Section 2 presents the alternative tests for the MDH adopted in this paper with a survey of the tests used in previous studies; Section 3 provides the details of the data and reports the empirical results, along with a brief survey of past empirical studies. Section 4 provides further discussions and the conclusion is drawn in Section 5.

This study examined return predictability of major foreign exchange rates by testing for martingale difference hypothesis (MDH) using daily and weekly data from 1975 to 2009. We used alternative MDH tests for linear and non-linear dependence, which include wild bootstrap automatic variance ratio test, generalized spectral test, and Dominguez–Lobato consistent tests. We evaluated time-varying return predictability by applying these tests with fixed-length moving sub-sample windows of 2 years. While exchange rate returns have been found to be unpredictable most of times, we observed episodes of statistically significant return predictability. We found that they are closely associated with the major events such as coordinated central bank interventions and the financial crises. This finding suggests that return predictability of foreign exchange rates occurs from time to time depending on changing market conditions, which is consistent with the implications of the adaptive markets hypothesis. That is, dynamic market conditions govern the degree of efficiency of foreign exchange markets.