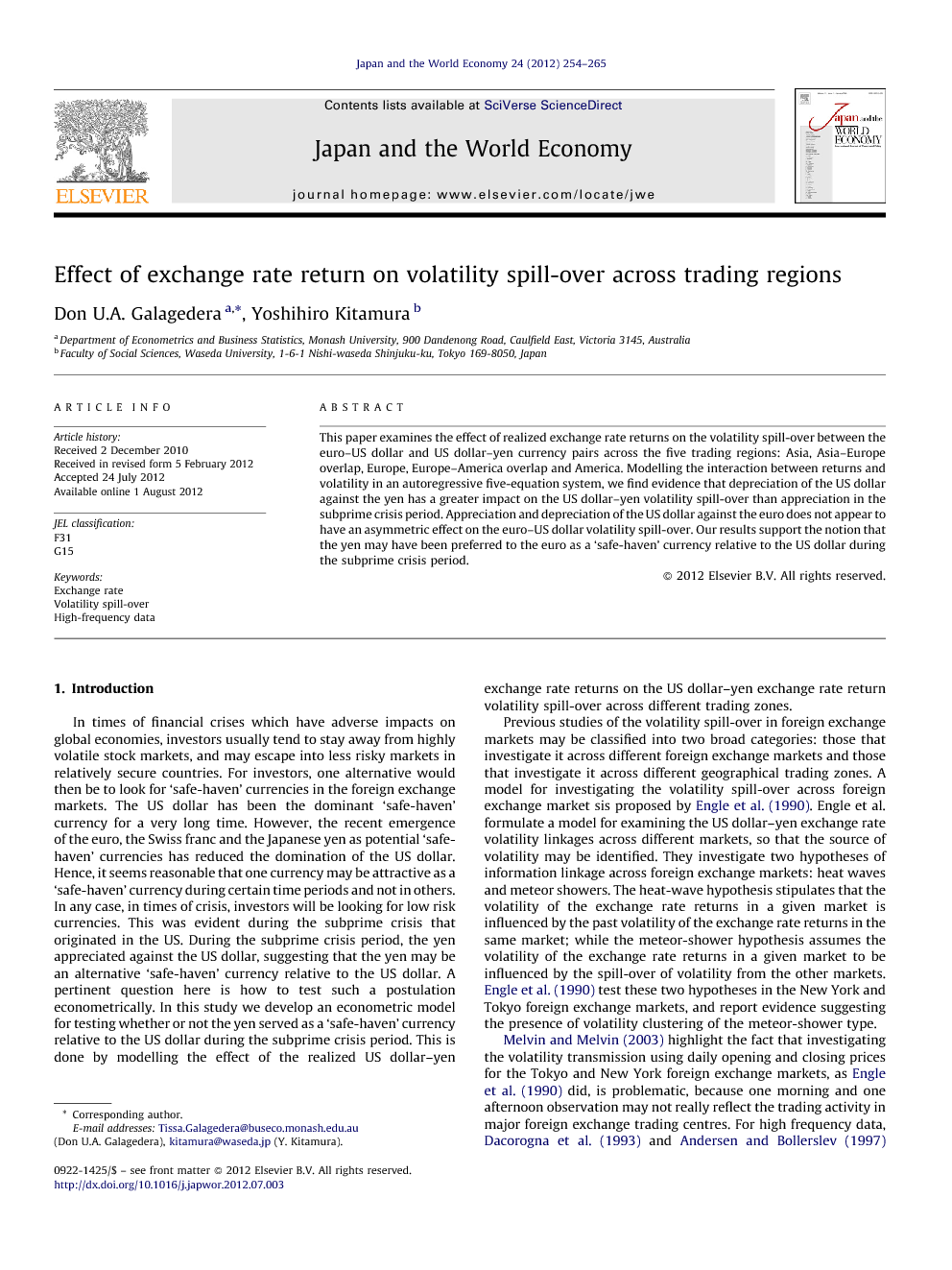 Previous studies have shown evidence that the volatility of intra-day exchange rate returns may spill over across the five trading regions that operate over a 24-h period, namely Asia, Asia–Europe overlap, Europe, Europe–America overlap and America. In this paper, we use intra-day data on the euro–US dollar and US dollar–yen currency pairs over the subprime crisis period to investigate whether the intra-day exchange rate return volatility spill-over is associated with the level of foreign exchange rate returns. We find that the depreciation of the US dollar against the yen affects the volatility spill-over more than the appreciation of the US dollar against the yen. The evidence of this asymmetric spill-over effect is stronger in the trading regions which are created with an overlap. In the euro–US dollar currency pair, we do not find evidence of an association between the volatility spill-over and the level of exchange rate returns. During the subprime crisis period, interest rates in Japan were extremely low and there was no indication of any substantial increase in interest rates to be expected in the short- to medium-term. Moreover, Japan has escaped from the recent global economic downturn relatively unscathed because it has a healthy surplus and does not rely on foreign investment much. These are good indicators of a stable currency, especially in times of volatile equity markets. Therefore, the yen would have been the preferred currency as an alternative to the US dollar for conservative ‘safe-haven’ currency investors during the global financial crisis period, relative to the euro. The increased trading activity of currency investors could have been a contributory factor for the observed asymmetric spill-over effect during that period. We do not suggest that the yen is a better alternative than the US dollar, or than any other currency for that matter, as a ‘safe-haven’ currency in all types of crises. Among the defining factors required for the recognition of a currency as a ‘safe-haven’ currency in times of crisis, in addition to investor confidence, is the type of the crisis, where it originates and its impact on global financial markets. On the other hand, during the subprime crisis period, the market participants may have postulated that the low interest rates in Japan would prevail over the short- and the medium-term. Such sentiments would have enticed the market participants to infer that yen is an unattractive currency for international investors. Therefore, for the market participants the sudden and/or sustained appreciation of the yen against the US dollar may have come as a surprise. Possible intervention of Bank of Japan in response to the US dollar–yen currency movement also may have crossed their mind. These are other potential causes of the pronounced US dollar–yen exchange rate return volatility spill over when the US dollar depreciated against the yen during the subprime crisis period.