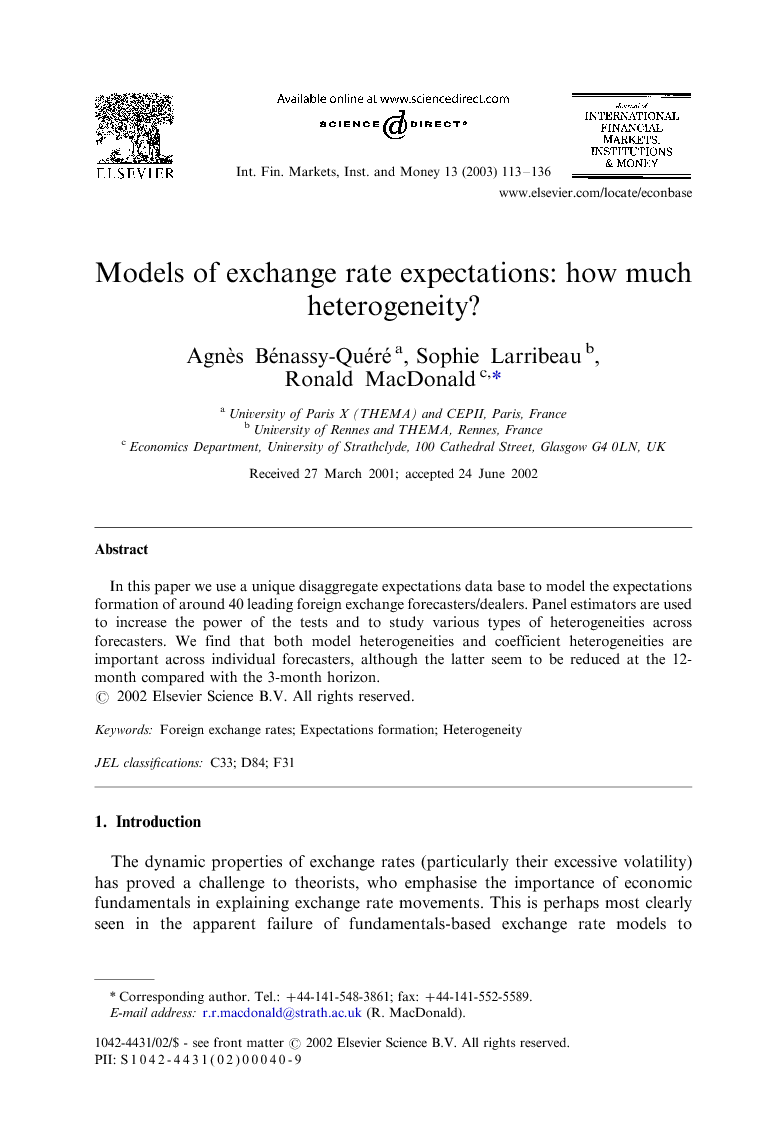 In this paper we use a unique disaggregate expectations data base to model the expectations formation of around 40 leading foreign exchange forecasters/dealers. Panel estimators are used to increase the power of the tests and to study various types of heterogeneities across forecasters. We find that both model heterogeneities and coefficient heterogeneities are important across individual forecasters, although the latter seem to be reduced at the 12-month compared with the 3-month horizon.

The dynamic properties of exchange rates (particularly their excessive volatility) has proved a challenge to theorists, who emphasise the importance of economic fundamentals in explaining exchange rate movements. This is perhaps most clearly seen in the apparent failure of fundamentals-based exchange rate models to outperform a simple random walk, a finding which ‘continues to exert a pessimistic effect on the field of empirical exchange rate modelling in particular and international finance in general’ (Frankel and Rose, 1995)1. One way in which theorists have tried to address this issue is by relaxing the assumption of rational expectations which is central to many traditional theoretical models, such as the monetary approach to the exchange rate. Indeed, several approaches have been developed where the market ‘consensus’ is the result of heterogenous beliefs based on differing models (chartists vs. fundamentalists, Frankel and Froot, 1986), and differing information sets (informed vs. uninformed, Lyons, 1991), differing capabilities (sophisticated vs. naive agents, De Long et al., 1990). Although some efforts have been made to show that specific forecasting methods like imitation can be reconciled with rational expectations (see for example, Orléan, 1986), little empirical work has been conducted to support the often ad hoc assumptions made in the theoretical literature2. In order to understand the behaviour of foreign exchange market participants, researchers have turned to examining the properties of survey based expectations, and this has recently become a very popular research avenue. Much of this work focuses on explaining the biasedness of the forward premium in terms of either a time-varying risk premium or expectational errors, or both (see Frankel and Froot, 1986, or Liu and Maddala, 1992). A relatively smaller portion of this work focuses on the actual formation of expectations. For example Frankel and Froot, 1987a, Frankel and Froot, 1987b, Frankel and Froot, 1990, Cavaglia et al., 1993a, Cavaglia et al., 1993b, MacDonald and Torrance, 1988 and Prat and Uctum, 1994 find that bandwagon effects tend to be prevalent at short horizons (3 months and less) while expectations appear to be stabilising at longer horizons (greater than 3 months). In a further paper, Prat and Uctum (2000), using consensus expectations, show that the best model to describe aggregated (average) predictions is a model mixing extrapolative, adaptive and regressive forecasts. However, the interpretation of such a result is difficult since it is unclear if it stems from individuals using different models, or from heterogeneous interpretation of the same information structure. A preliminary answer to this question comes from the work of Ito, 1990 and MacDonald and Marsh, 1996; Elliott and Ito (1999). All of these studies are based on the following type of regression equation: View the MathML source where sjte is the individuals expectation, sAte is the (cross section) average forecast and εjt is an error term. In an estimated version of this equation, a finding that gj is significantly different from zero indicates that individuals j's forecast differs significantly from the cross section average and this may be interpreted as evidence of individual heterogeneity. Using a disaggregate survey data base constructed from the forecasts of Japanese-based exchange rate forecasters, Ito finds that there is extensive evidence of such heterogeneity and that this varies across various groups of exchange rate forecasters. MacDonald and Marsh demonstrate, using a panel survey data base of foreign exchange expectations from seven financial centres, that forecasters exhibit considerable heterogeneity, both in terms of a statistically significant value for g and also in terms of their interpretation of common information. Elliott and Ito update the work of Ito for Japan and they also find substantial evidence of individual heterogeneity in terms of statistically significant values of g. In this study, we attempt to analyse the origins of the evident heterogeneity of foreign exchange market expectations by explicitly examining the expectations formation processes of individual foreign exchange market participants. To our knowledge such a study has not been undertaken before and should, therefore, provide useful information about a key aspect of expectations behaviour. In particular, we use individual data from the forecasts of Consensus Economics of London panel survey. These forecasts are for 3- and 12-month horizons and relate to the US dollar bilateral rates of the DM, yen and pound sterling for the period 1990–1994. Three basic models are estimated on each panel data base: an extrapolative, a regressive and an adaptive model. The coefficients are allowed to vary across individuals, and we test for the homogeneity of all individual coefficients using a Swamy test on the whole sample and on the sub-sample of those individuals displaying significant estimates. This facilitates making inferences on coefficient heterogeneities within each expectational framework, which is substantially different to the kind of test employed by others and discussed above. Finally, we estimate a mixed model, which nests the three basic ones, in order to test for model heterogeneities. This last exercise allows us to assess whether the ‘consensus’ forecast is made by heterogenous forecasters, or whether each forecaster himself uses a mixed model. The outline of the remainder of this paper is as follows. In the next section, we present the methodology and data used in this paper. Section 3 contains our results concerning coefficient heterogeneities based on the estimation of the three basic models. Section 4 deals with model heterogeneities on the basis of mixed model estimations. Section 5 concludes.

A key theme in recent theorising on the operation of financial markets concerns the importance of heterogeneous expectations amongst agents. The purpose of this paper was to determine the nature of the expectations processes governing agents’ expectations formation and the degree of heterogeneity of such processes. We are unaware of any other study which has focussed on the expectational processes of individual foreign exchange rate forecasters. In contrast to other studies in this area, we used panel estimators, and focused both on coefficient heterogeneities (within a single basic model, either extrapolative, regressive or adaptive) and on model heterogeneities (i.e. on differences across individuals in the basic models used). The expectational series used were extracted from the survey data base of Consensus Economics of London, and consisted of 3- and 12-month expectations of the US dollar bilateral rates of the German mark, Japanese yen and pound sterling, for the period January 1990 to December 1994. Our testing methods centred around two panel estimators, namely a fixed effects model and a random coefficients model. The former is seen as a base-line model in which we capture heterogeneities solely in terms of differing intercepts across individuals, whereas in the latter heterogeneity also exhibits itself in terms of differing coefficients and is summarised with a Swamy test. Our main finding is that both model and coefficient heterogeneities are large. Specifically, a large number of individuals do not use each basic (i.e. extrapolative, regressive or adaptive) model, while few individuals use the three models at the same time (the mixed model performs poorly when coefficients are allowed to vary across individuals). This finding shows that the mixed behaviour of the panel average found in previous studies results from the aggregation of heterogeneous individuals. Among individuals who use a specific model, there are important heterogeneities in the coefficients used. For example, some individuals produce very small (and sometimes negative) coefficients of reversion in the regressive model. We believe our finding of heterogeneous expectation processes across individuals justifies the building of models of exchange rate determination which are based on the coexistence of various types of agents. This finding may also be important for policy makers who should not expect all speculators to behave in the same way in the foreign exchange market. Notwithstanding individual heterogeneities, some regularities show up across horizons. Namely, the regressive model, with absolute PPP reversion, performs better for the 12-month horizon, while relative PPP performs better for the 3-month horizon. Within the extrapolative specification, there is less heterogeneity for the 12-month horizon than for the 3-month horizon, implying that forecasters probably rely more heavily on public forecasts in the latter case. Hence, our results support the building of models of exchange rate determination based on the interaction between heterogeneous forecasters at relatively short horizons (3 months or less) as well as models contrasting forecasting behaviour at various horizons.