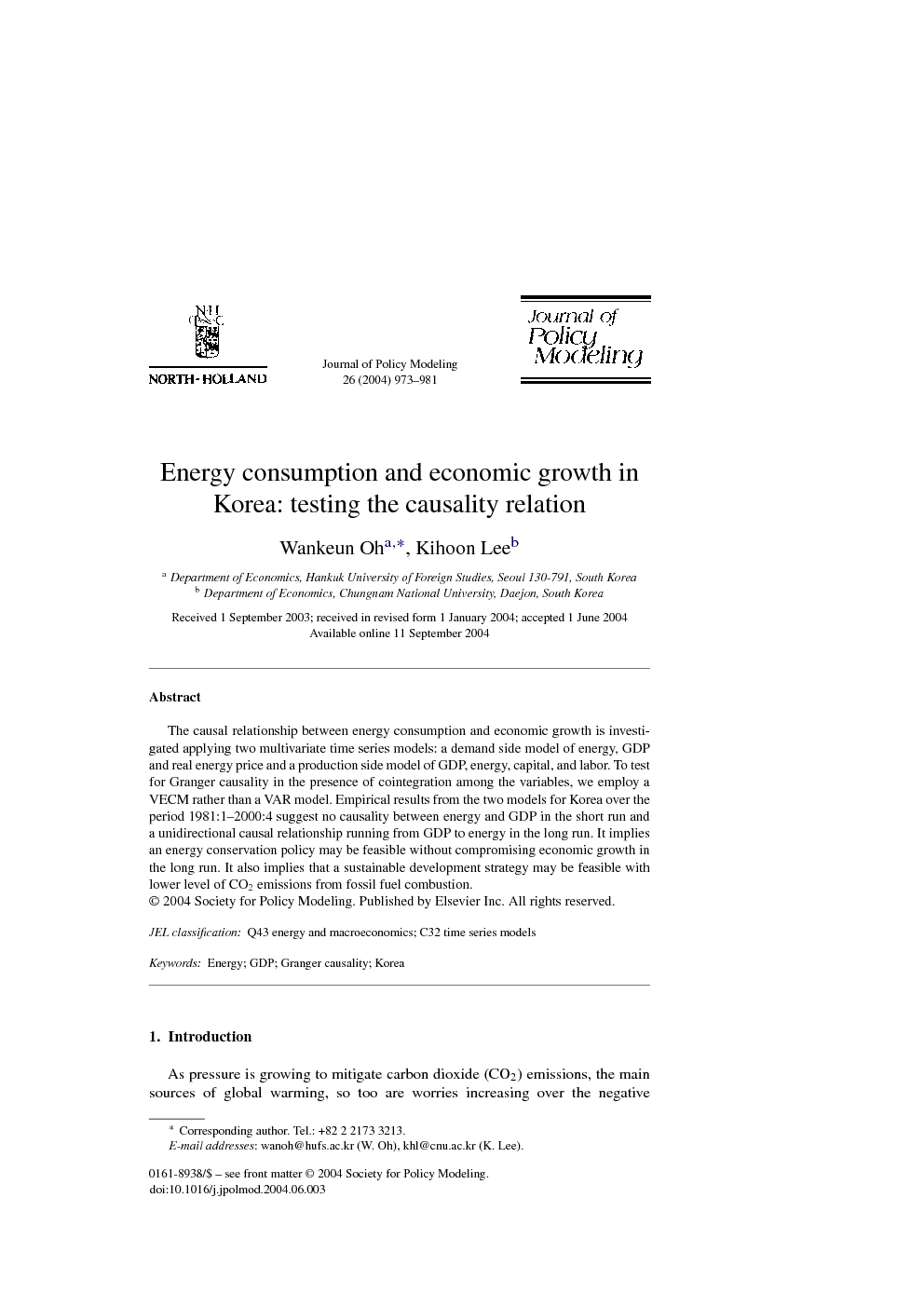 The causal relationship between energy consumption and economic growth is investigated applying two multivariate time series models: a demand side model of energy, GDP and real energy price and a production side model of GDP, energy, capital, and labor. To test for Granger causality in the presence of cointegration among the variables, we employ a VECM rather than a VAR model. Empirical results from the two models for Korea over the period 1981:1–2000:4 suggest no causality between energy and GDP in the short run and a unidirectional causal relationship running from GDP to energy in the long run. It implies an energy conservation policy may be feasible without compromising economic growth in the long run. It also implies that a sustainable development strategy may be feasible with lower level of CO2 emissions from fossil fuel combustion.

As pressure is growing to mitigate carbon dioxide (CO2) emissions, the main sources of global warming, so too are worries increasing over the negative impact on economic growth caused by the restricted use of fossil fuels. Various economic policies and options have been studied in order to attempt to practice energy conservation without impinging on economic growth. The relationship between energy consumption and economic growth has been the subject of intense research over the past three decades. Recently, numerous studies have investigated the causal relationship between the two variables by using time-series analysis, in particular by using the concept of Granger causality. However, empirical evidences from these studies seem to be diverged rather than converged. A recent advance in this area is to use a multivariate approach rather than a bivariate approach. Stern, 1993 and Stern, 2000 motivated by the fact that energy can be substituted for capital and labor, investigated Granger causality between energy and GDP in a multivariate model by adding capital and labor for the USA in the post-war period. Following Stern, Oh and Lee (2004) also looked at the relationship but in a vector error correction model (VECM). Masih and Masih, 1997 and Masih and Masih, 1998 and Asafu-Adjaye (2000) examined the relationship with a trivariate model by adding a price variable to the conventional energy-GDP bivariate model. Another methodological development is to use a vector error correction model instead of a vector autoregressive (VAR) method in the presence of cointegration among variables. VAR models may suggest a short run relationship between the variables because long run information is removed in the first differencing, while a VECM can avoid such shortcomings. In addition, a VECM can distinguish between a long run and a short run relationship among the variables, and can identify sources of causation that cannot be detected by the usual Granger causality test. Moreover, the VAR method may be improper in the presence of cointegration. Previous studies that applied this development include Yu and Jin (1992), Masih and Masih, 1997 and Masih and Masih, 1998 and Asafu-Adjaye (2000). Following these developments, this paper investigates the Granger causal relationship between energy consumption and economic growth for Korea in the past two decades in a multivariate setting using VECM instead of a VAR or Sims technique. We construct two multivariate models – a demand side model and a production side model. We look at both sides to see if the causal relationships between the two sides are different. The demand side model follows Masih and Masih (1997) and Asafu-Adjaye (2000) in that a VECM is used for the trivariate variables of energy, GDP and consumer price index (CPI) as a proxy for real energy price. The model, however, uses real energy price instead CPI. The production side model follows Stern, 1993 and Stern, 2000. We employ the same four variables (energy, GDP, capital, and labor) in our multivariate model. This paper, however, does not follow his time series methodology, VAR, but uses VECM as we find cointegration among variables. Finally, as we suspect temporal aggregation of either quarterly or monthly data into annual data may weaken causal relationships between the variables, quarterly data from 1981:1 to 2000:4 for Korea are employed in our analysis. Use of quarterly data also helps to reduce dataset size problems normally encountered by studies employing annual time series.

In examining the causal relationship between energy consumption and economic growth, instead of using the bivariate time series model, we constructed two multivariate models: one a demand side model of energy, GDP, and real energy prices, and the other a production side model of GDP, energy, capital and labor. To test Granger causality, we employed a VECM, instead of a VAR model, because we have found strong evidence that the variables are cointegrated. The empirical results suggest that multivariate VECM models can be useful in examining Granger causality in the presence of cointegration, especially in distinguishing short-run relationships from long-run dynamics. We found the existence of a long-run unidirectional causal relationship from GDP to energy, but no short-run causal relationship between energy and GDP. The source of causation in the long run points to the error correction term. This implies energy conservation may be feasible in the sense that it may not negatively impinge on economic activity in the long run. This is because a decrease in energy input does not necessarily lead to a decrease in output, given the other input variables, namely, capital and labor, even though an increase in output does usefully predict an increase in energy input. If capital and/or labor usage increases while there is a decrease in energy input, output may not decrease. The effect on output thus depends on the nature of the relationship among the three inputs, particularly whether complementarity and/or substitutability obtain among the input variables. No evidence of long-run causality from energy to economic growth also implies that decoupling CO2 emissions limitations from economic growth may be achievable. Sustainable development strategies with lower levels of CO2 emissions from fossil fuel combustion may be feasible. Even if curbing the growth of CO2 emissions remains a long-term goal, its impact on economic growth may become rather remote. We find historic evidence from the Japanese economy, which shows that since the two Oil Shocks, economic growth may not have been held back even with a parsimonious energy policy. This experience may have made it possible for Japan to commit to very tight limitations on CO2 emissions under the Kyoto Protocol. The long-run unidirectional causality from GDP to energy consumption, however, suggests that extra efforts and measures are needed in limiting CO2 emissions if the economy is fast growing or in a stage of economic recovery.