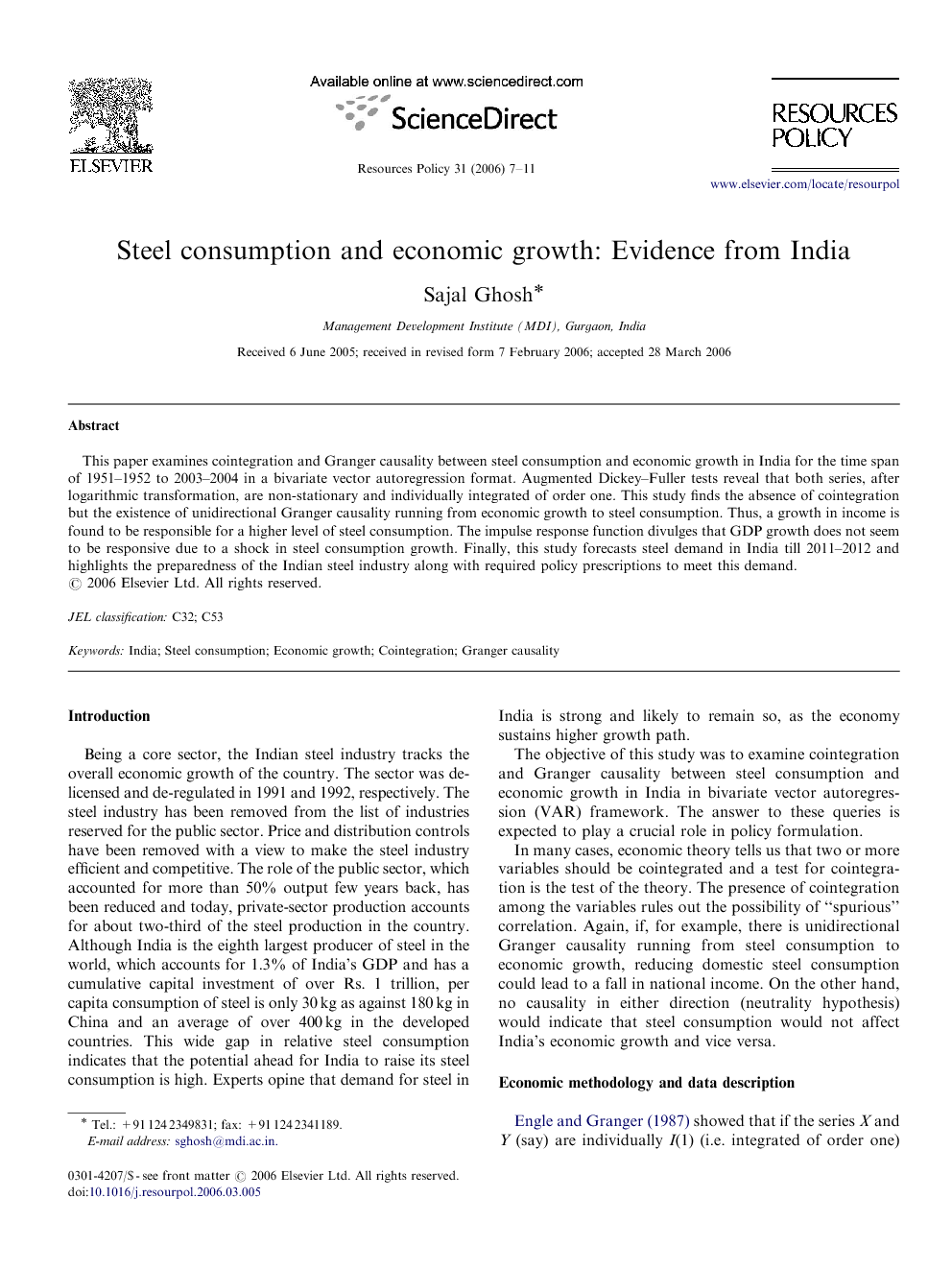 This paper examines cointegration and Granger causality between steel consumption and economic growth in India for the time span of 1951–1952 to 2003–2004 in a bivariate vector autoregression format. Augmented Dickey–Fuller tests reveal that both series, after logarithmic transformation, are non-stationary and individually integrated of order one. This study finds the absence of cointegration but the existence of unidirectional Granger causality running from economic growth to steel consumption. Thus, a growth in income is found to be responsible for a higher level of steel consumption. The impulse response function divulges that GDP growth does not seem to be responsive due to a shock in steel consumption growth. Finally, this study forecasts steel demand in India till 2011–2012 and highlights the preparedness of the Indian steel industry along with required policy prescriptions to meet this demand.

Being a core sector, the Indian steel industry tracks the overall economic growth of the country. The sector was de-licensed and de-regulated in 1991 and 1992, respectively. The steel industry has been removed from the list of industries reserved for the public sector. Price and distribution controls have been removed with a view to make the steel industry efficient and competitive. The role of the public sector, which accounted for more than 50% output few years back, has been reduced and today, private-sector production accounts for about two-third of the steel production in the country. Although India is the eighth largest producer of steel in the world, which accounts for 1.3% of India's GDP and has a cumulative capital investment of over Rs. 1 trillion, per capita consumption of steel is only 30 kg as against 180 kg in China and an average of over 400 kg in the developed countries. This wide gap in relative steel consumption indicates that the potential ahead for India to raise its steel consumption is high. Experts opine that demand for steel in India is strong and likely to remain so, as the economy sustains higher growth path. The objective of this study was to examine cointegration and Granger causality between steel consumption and economic growth in India in bivariate vector autoregression (VAR) framework. The answer to these queries is expected to play a crucial role in policy formulation. In many cases, economic theory tells us that two or more variables should be cointegrated and a test for cointegration is the test of the theory. The presence of cointegration among the variables rules out the possibility of “spurious” correlation. Again, if, for example, there is unidirectional Granger causality running from steel consumption to economic growth, reducing domestic steel consumption could lead to a fall in national income. On the other hand, no causality in either direction (neutrality hypothesis) would indicate that steel consumption would not affect India's economic growth and vice versa.

The study finds the absence of a long-run equilibrium relationship between steel consumption and economic growth in India but establishes the presence of unidirectional Granger causality running from GDP growth to steel consumption. Impulse response function also reveals that GDP growth does not seem to be responsive to a shock in steel consumption growth. Existence of Granger causality from economic growth to steel consumption without any feedback effect reveals that a growth in income is responsible for fostering steel consumption. This is quite obvious as with economic growth, the demands for consumer durables, automobiles, construction and infrastructure have been increased, where steel is used as one of the basic infrastructural inputs. According to experts, world's steel demand should continue to grow by around 5%, driven by the continuing strong demand in China, India, Latin America and other Asian countries. Ballooning global demand coupled with increasing input costs for steel production, due to limited availability of iron ore and coking coal, should push forward the steel price in northeast direction. The Indian steel sector enjoys advantages of domestic availability of raw materials and cheap labor. The Indian steel-makers already have one foot in the global market and are therefore familiar with international conditions. Most of the major steel manufacturers in India have already envisaged huge expansion plans in the short and medium terms so that, in addition to meeting the strong domestic demand, they can compete in the international market to supply to regions such as Middle East, Southeast Asia and China. The companies that have already announced their capacity addition program include Steel Authority of India Limited (8 Mt), Tata Iron & Steel Company (9.5 Mt), ESSAR (1.5 Mt), Rashtriya Ispat Nigam Limited (7 Mt), Jindal Iron And Steel Company (3 Mt), ISPAT (1.7 Mt) and Nilachal Ispat (0.5 Mt). However, in order to make the domestic steel industry a leader in the global arena, providing adequate infrastructure such as power, roads, ports and rail transport is an essential prerequisite. The other major deciding factor is the availability of raw materials. For the integrated steel plant, iron ore and coking coal supplies need to be tied up. The government has to look at the mineral policy and coal policy in the light of current reality and come out with suitable policies for mining leases, development of new mines, environmental clearance, trading and export of iron ore and removal of trade barriers imposed by developed countries like the USA and European Union. Indian companies, going global, should also emphasize on energy conservation measures and acquire coalfields abroad for captive purposes.