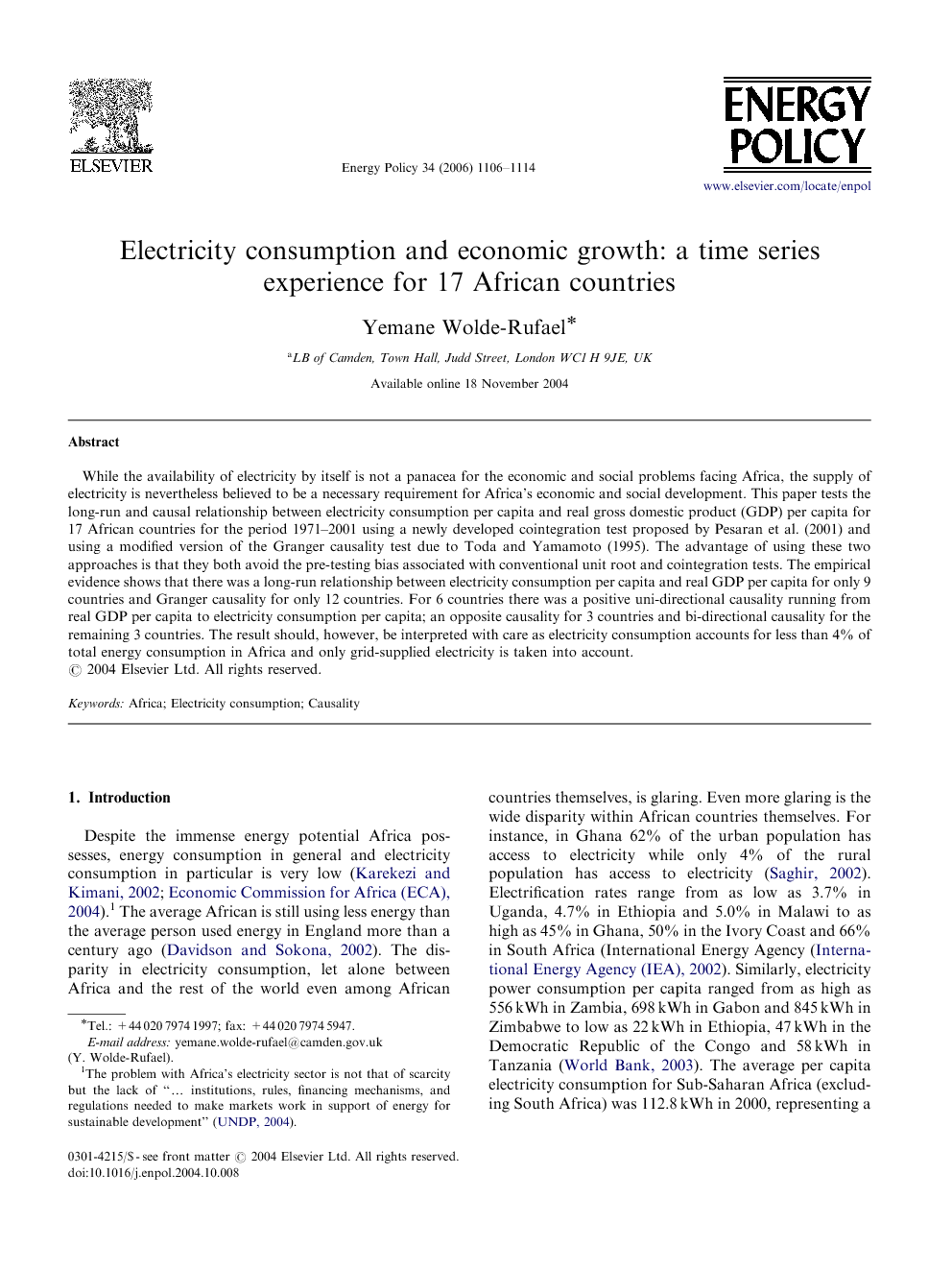 In this paper, a recently developed cointegration and a modified version of the Granger causality tests were applied to investigate the long-run and causal relationship between real GDP per capita and electricity per capita consumption for 17 African countries for the period 1971–2001. Long run cointegrating relationship between the two series could be detected only for 9 countries, while causality for only 12 countries. This paper did not provide a definite stand on the existence or non-existence of the causal relationship between electricity consumption and economic growth, but our results show the following: (1) past values of economic growth have a predictive ability in determining present values of electricity consumption in some countries, (2) past values of electricity consumption have a predictive ability in determining the present values of economic growth; (3) there was feedback in some countries and (4) there was a lack of causal relationship for some countries. What the evidence may suggest is that there may be a number of factors at work that differ significantly across countries that account for the different directions of causality detected in this paper. Finding some of these factors that can help to explain this disparity may be another line of inquiry that can help us understand the relationship between electricity consumption and economic development. It is also important to note that the results of this study should be interpreted with care as electricity consumption not only accounts for a very small share of total energy consumed but is also confined to the urban and commercial and industrial but denied to the substantial majority of people in Africa. In addition, non−grid electricity consumption, which plays a significant role especially in small businesses and medium−sized enterprises development, is not taken here into consideration. The challenge of providing adequate and reliable energy cannot be divorced from the other challenges Sub−Saharan African is facing. Poverty and poor access to modern energy are intractably linked and cannot be divorced from the many challenges Africa must tackle. Africa's energy problem is partly a result of the continent's macroeconomic mismanagement. Without improving the management of the economy and reducing the role of the state that has been blamed for Africa's economic ills, it is difficult to envisage how the energy challenges facing African countries can be addressed. The twin problems of low accessibility and lack of financial resources cannot be solved without drastic and fundamental changes to Africa's energy policy. Scarcity of energy supply is not the fundamental problem Sub−Saharan Africa is facing but its management is. It is encouraging to see that Africa is trying to make strides in restructuring its power sector industry with the view to making this sector efficient and accessible. However, without making the environment conducive to attracting the huge financial requirement needed to address the energy problem, African will remain without modern electricity for many years to come. It was beyond the scope of the paper to investigate the impact of the current wave of electricity restructuring that is sweeping Africa, but it would be interesting to see if these policy changes have made any impact on the accessibility and efficiency of the electricity sector in Africa. Unless the infrastructure necessary for modern supply of electricity and other forms of modern energy is firmly laid down, the talk about making electricity a driving force in Africa's economic development and an instrument for alleviating poverty and deprivation is naïve at best and a deliberate deception at worst.