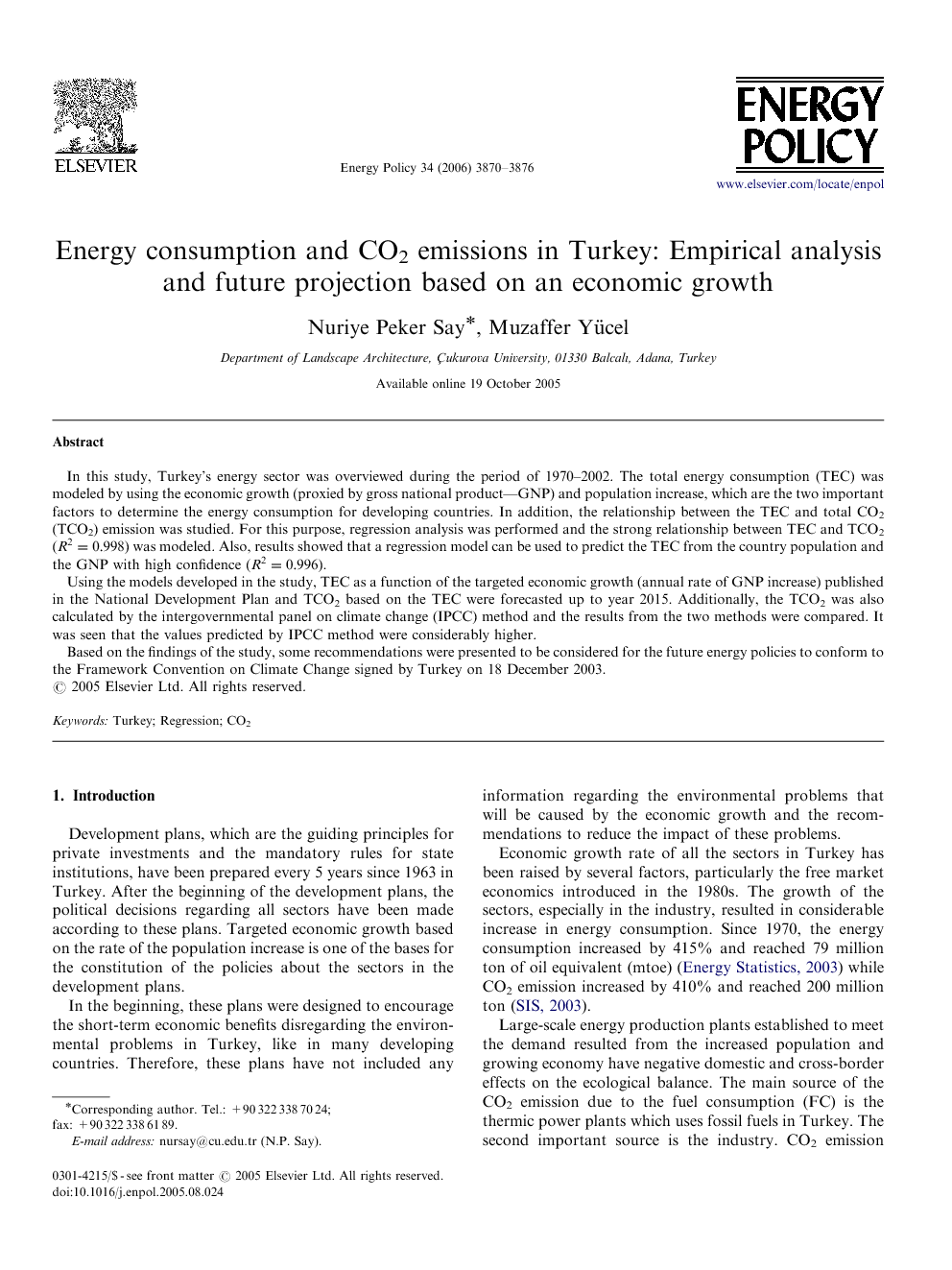 In this study, Turkey's energy sector was overviewed during the period of 1970–2002. The total energy consumption (TEC) was modeled by using the economic growth (proxied by gross national product—GNP) and population increase, which are the two important factors to determine the energy consumption for developing countries. In addition, the relationship between the TEC and total CO2 (TCO2) emission was studied. For this purpose, regression analysis was performed and the strong relationship between TEC and TCO2 (R2=0.998) was modeled. Also, results showed that a regression model can be used to predict the TEC from the country population and the GNP with high confidence (R2=0.996). Using the models developed in the study, TEC as a function of the targeted economic growth (annual rate of GNP increase) published in the National Development Plan and TCO2 based on the TEC were forecasted up to year 2015. Additionally, the TCO2 was also calculated by the intergovernmental panel on climate change (IPCC) method and the results from the two methods were compared. It was seen that the values predicted by IPCC method were considerably higher. Based on the findings of the study, some recommendations were presented to be considered for the future energy policies to conform to the Framework Convention on Climate Change signed by Turkey on 18 December 2003.

Development plans, which are the guiding principles for private investments and the mandatory rules for state institutions, have been prepared every 5 years since 1963 in Turkey. After the beginning of the development plans, the political decisions regarding all sectors have been made according to these plans. Targeted economic growth based on the rate of the population increase is one of the bases for the constitution of the policies about the sectors in the development plans. In the beginning, these plans were designed to encourage the short-term economic benefits disregarding the environmental problems in Turkey, like in many developing countries. Therefore, these plans have not included any information regarding the environmental problems that will be caused by the economic growth and the recommendations to reduce the impact of these problems. Economic growth rate of all the sectors in Turkey has been raised by several factors, particularly the free market economics introduced in the 1980s. The growth of the sectors, especially in the industry, resulted in considerable increase in energy consumption. Since 1970, the energy consumption increased by 415% and reached 79 million ton of oil equivalent (mtoe) (Energy Statistics, 2003) while CO2 emission increased by 410% and reached 200 million ton (SIS, 2003). Large-scale energy production plants established to meet the demand resulted from the increased population and growing economy have negative domestic and cross-border effects on the ecological balance. The main source of the CO2 emission due to the fuel consumption (FC) is the thermic power plants which uses fossil fuels in Turkey. The second important source is the industry. CO2 emission (38%) was due to the energy transformation (thermic plants) sector while the industry had a share of 28% in 2002 (SIS, 2003). There are few studies that investigate the relationship between economic growth, energy consumption, and the environmental considerations around the world. Some of them investigated the relationship between energy demand, gross national product (GNP), the real energy prices, and the estimation of CO2 emissions (Lester and Ninomiya, 2005), while some of them focused on the relationship between economic growth, energy consumption, and environmental considerations with recommendations for sustainable development (Zhidong, 2003). As seen from literature, there is a strong relationship between GNP, energy use, and CO2 emission in Turkey for years 1970–2003 (Fig. 1) (Energy Statistics, 2003; SIS, 2004; CBRT, 2004).The objective of this study was to investigate and model the relationship between economic growth by means of GNP, energy consumption, and CO2 emission and to present recommendations based on future estimates by considering the energy politics applied in last 30 years in Turkey. In addition, total energy consumption (TEC) and total CO2 (TCO2) emission models were developed to predict the energy consumption and CO2 emission up to year 2015. The characteristics of the energy sector of Turkey, modeling techniques used in the study, and the results were given in following sections.

The CO2 emission values predicted using the IPCC method and the TCO2 model are given in Table 6 for 2010 and 2015.When the predicted TCO2 values obtained from the two methods were compared, it was seen that the values predicted by IPCC method were noticeably higher. For instance, for the year 2010, the TCO2 predicted by the IPCC method was 480,244 Gg while the one obtained by the TCO2 model developed in this study was 363,769 Gg (Table 6). The most important reason of this difference is attributed to MENR's estimation of the FC values which were observed to be markedly higher than the actual values. For example, the actual energy consumption was 78,403 btoe for the year 2002. However, this was predicted as 109,035 btep by the MENR in 1998. Another example is that the coal consumption prediction of the MENR calculated in 1998 was 26,842 btep for the year 2002 while the actual consumption was 19,473 btep. Realistic estimation of the greenhouse emissions gained more importance, especially after Turkey became a party to the Framework Convention on Climate Change on 18 December 2003, because being a party to this convention brings more responsibilities. Therefore, better predictions and plans need to be put into practice to meet the responsibilities of the convention. The method that is accepted worldwide for the calculation of the greenhouse emissions is the IPCC method. In Turkey, the main responsible institution is the MENR for these calculations. The predictions of the energy consumption should be as close as possible to the actual values. However, in Turkey conditions, the prediction of these values seen to be higher than the actual ones due to political and economical reasons is an important topic discussed in different platforms (CEE, 2003). Energy is vital and one of the pivotal inputs which affects the economical and social development. While energy consumption is inevitably expanding in parallel to the increasing population, industrialization, and prosperity level, efficient ways of energy use should be investigated. One of the most important tasks from the point of sustainability is to decouple the economic growth from the environmental impact. Therefore, minimum energy consumption with least cost, which results in least detrimental effect on the environment and also promotes the economic and social development, should be achieved by considering sustainable development principles. After evaluating the energy sector in Turkey and future predictions, the following findings were obtained: • Turkey contributes to the global CO2 emissions with a share of 0.9%. It is expected that the energy consumption and CO2 emissions in Turkey will continue to increase as a result of the energy politics implemented in the past and planned for the future. • TEC (95%) is obtained from the fossil resources in Turkey. The thermic power plants are the most common in the energy production systems. There are 32 thermal power plants with a total capacity of 19,568.3 MW. Some of these plants utilize low-calorie domestic lignite. These plants are an important source of the TCO2 emissions in Turkey with 38% share. • The lignite, which is also used in significant amounts in Turkey, causes the highest CO2 emission. The hydraulic energy production systems are the cleanest energy source since they have the lowest CO2 emission. Although Turkey has a great hydraulic potential, it uses only 25% of this potential (Energy Statistics, 2003). • An 8.4% increase in energy consumption is expected as a result of the population increase and the 6.7% economic growth expected in the upcoming years in Turkey. Also, it is expected that this increase in the energy consumption will increase the CO2 emission by 9.9% yearly in average. The fundamental political and planning criterions can be evaluated under three topics as depicted in Fig. 7 according to the findings mentioned above. (a) Reducing the greenhouse emissions: It is expected that the CO2 emission will increase by 49% from 2000 to 2015. This increase should be evaluated as a reference for reducing the greenhouse emission to meet the conditions of the Framework Convention on Climate Change. (b) Increasing the domestic production: Renewable energy sources should be utilized as much as possible. (c) Reducing the energy losses: Since it is difficult to reduce the energy consumption in developing countries like Turkey, preventing the losses of transportation and distribution (30%) can be considered as an important benefit (Arıkan, 2003).These criterions will be the basis for energy politics and plans by considering the “other sectors”, “political concerns” regarding the energy sector, and “plans and its applications in local scale” explained in Fig. 7.