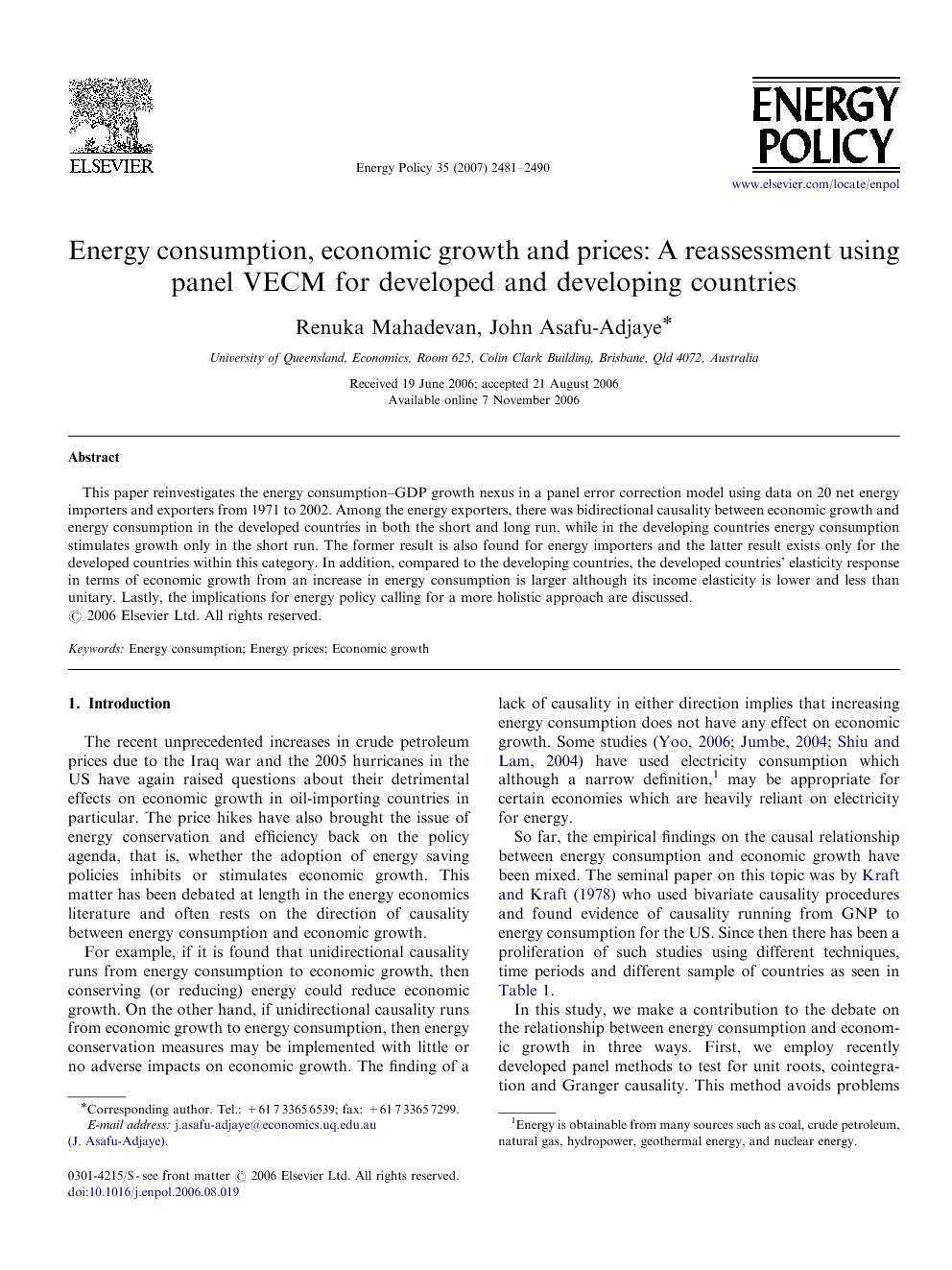 The recent unprecedented increases in crude petroleum prices due to the Iraq war and the 2005 hurricanes in the US have again raised questions about their detrimental effects on economic growth in oil-importing countries in particular. The price hikes have also brought the issue of energy conservation and efficiency back on the policy agenda, that is, whether the adoption of energy saving policies inhibits or stimulates economic growth. This matter has been debated at length in the energy economics literature and often rests on the direction of causality between energy consumption and economic growth. For example, if it is found that unidirectional causality runs from energy consumption to economic growth, then conserving (or reducing) energy could reduce economic growth. On the other hand, if unidirectional causality runs from economic growth to energy consumption, then energy conservation measures may be implemented with little or no adverse impacts on economic growth. The finding of a lack of causality in either direction implies that increasing energy consumption does not have any effect on economic growth. Some studies (Yoo, 2006; Jumbe, 2004; Shiu and Lam, 2004) have used electricity consumption which although a narrow definition,1 may be appropriate for certain economies which are heavily reliant on electricity for energy. So far, the empirical findings on the causal relationship between energy consumption and economic growth have been mixed. The seminal paper on this topic was by Kraft and Kraft (1978) who used bivariate causality procedures and found evidence of causality running from GNP to energy consumption for the US. Since then there has been a proliferation of such studies using different techniques, time periods and different sample of countries as seen in Table 1.In this study, we make a contribution to the debate on the relationship between energy consumption and economic growth in three ways. First, we employ recently developed panel methods to test for unit roots, cointegration and Granger causality. This method avoids problems of low power associated with the traditional unit root and cointegration tests. Pooling increases the sample size considerably, allowing for higher degrees of freedom and hence more accurate and reliable statistical tests. It also reduces collinearity between regressors. Another advantage of using panel cointegration is that it allows for heterogeneity among the countries. To the best of our knowledge, only Lee (2005) and Al-Iriani (2006) have used the panel causality tests but our study differs from theirs in more ways than one. While the latter study uses a bivariate model (and only reports long run results) for six countries in the Gulf Cooperation Council, the former uses a trivariate model with capital stock2 for 18 developing countries. The trivariate model allows an additional channel of causality to be investigated. Thus similar to the Lee study, we consider a trivariate model but one that proxies energy prices. This is because price responses have been argued to have a crucial role in affecting income and energy consumption directly (Dunkerley, 1982; Hoa, 1993). Although data on energy prices would be ideal to use, given the multicountry nature in a panel estimation framework, it is not possible to obtain a comparable series on energy prices for all 20 countries over 1971–2002.3 The information-intensive difficulty of this exercise is compounded by the fact that the use of energy sources (such as use of coal, oil, etc.) vary in these economies and different prices exist for residents and industries. Furthermore, industries that are energy-intensive may well be subsidised by the government and therefore face different prices. Hence the consumer price index is used instead as energy prices are expected to be sufficiently reflected in this index. The second contribution of the study is in the check for robustness of the empirical outcome by a comparison of the panel causality results (both short and long run) with those from the separate estimation of a vector error correction model (VECM) for each country. In addition, the impact on elasticity with respect to changes in GDP growth and energy consumption are also discussed using both pooled and individual estimations. The third contribution lies in the sample that considers a mix of countries comprising both net energy producers and consumers, as well as developing and developed countries. Most previous studies have either focussed on single countries or groups of countries of a similar level of economic development. Here, we examine countries at two different stages of development within the group of energy exporter and importers. This has important policy implications for energy use considering the differences in production, consumption and institutional structures. The analysis of the sample mix adds to the existing debate by considering the following questions. First, what are the similarities and/or differences in the causality behaviour between the variables for net energy exporters and importers? Second, within this category, does the causality relationship depend on the level of economic development of the economy? Third, what implications does this have on elasticities of income and energy consumption as well as for energy policy? The paper proceeds as follows. Section 2 provides an overview of the panel VECM used in the study. Section 3 discusses the data. Section 4 presents and discusses the empirical results while Section 5 concludes.

At the outset it must be noted that the purpose of this paper is not to resolve the conflicting evidence on the relationship between energy consumption and economic growth. Instead, the study provides some broad and useful generalisations about the relationship in both developed and developing economies within the group of net energy exporters and importers. The results on causality and the elasticity response of changes in energy consumption and economic growth on each other are compared and discussed using both pooled and unpooled estimation techniques in an attempt to reconcile country-specific analysis before the generalisations can be substantiated. Lastly, the form in which energy policy takes effect is crucial. While it is difficult to be definitive about energy policy, it must be acknowledged that such a discussion needs a holistic setting to be more effective and not just based on the empirical evidence on causality between energy consumption and economic growth.