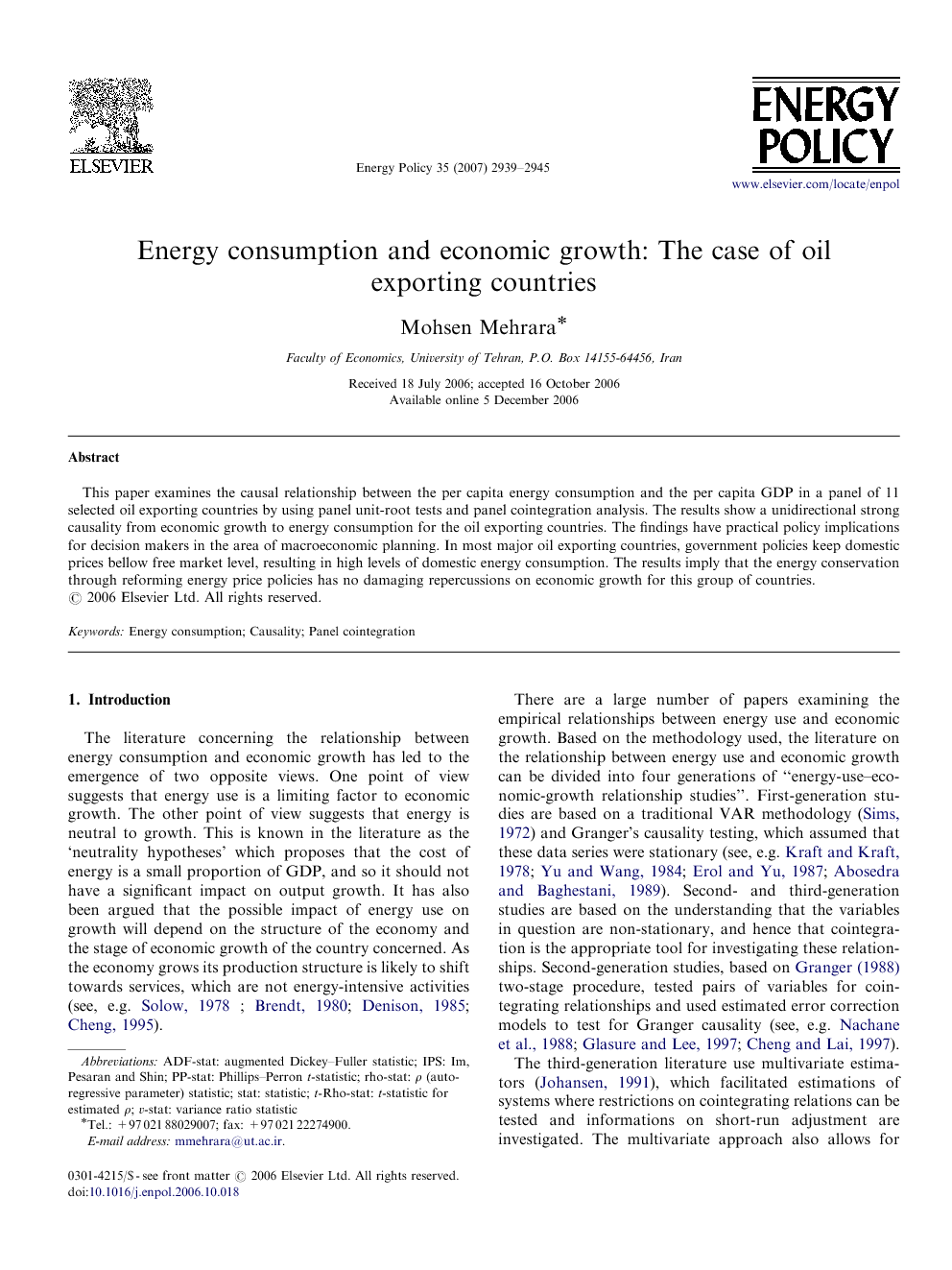 The literature concerning the relationship between energy consumption and economic growth has led to the emergence of two opposite views. One point of view suggests that energy use is a limiting factor to economic growth. The other point of view suggests that energy is neutral to growth. This is known in the literature as the ‘neutrality hypotheses’ which proposes that the cost of energy is a small proportion of GDP, and so it should not have a significant impact on output growth. It has also been argued that the possible impact of energy use on growth will depend on the structure of the economy and the stage of economic growth of the country concerned. As the economy grows its production structure is likely to shift towards services, which are not energy-intensive activities (see, e.g. Solow, 1978 ; Brendt, 1980; Denison, 1985; Cheng, 1995). There are a large number of papers examining the empirical relationships between energy use and economic growth. Based on the methodology used, the literature on the relationship between energy use and economic growth can be divided into four generations of “energy-use–economic-growth relationship studies”. First-generation studies are based on a traditional VAR methodology (Sims, 1972) and Granger's causality testing, which assumed that these data series were stationary (see, e.g. Kraft and Kraft, 1978; Yu and Wang, 1984; Erol and Yu, 1987; Abosedra and Baghestani, 1989). Second- and third-generation studies are based on the understanding that the variables in question are non-stationary, and hence that cointegration is the appropriate tool for investigating these relationships. Second-generation studies, based on Granger (1988) two-stage procedure, tested pairs of variables for cointegrating relationships and used estimated error correction models to test for Granger causality (see, e.g. Nachane et al., 1988; Glasure and Lee, 1997; Cheng and Lai, 1997). The third-generation literature use multivariate estimators (Johansen, 1991), which facilitated estimations of systems where restrictions on cointegrating relations can be tested and informations on short-run adjustment are investigated. The multivariate approach also allows for more than two variables in the cointegration relationship (see, e.g. Masih and Masih, 1996, Masih and Masih, 1997 and Masih and Masih, 1998; Yang, 2000a and Yang, 2000b; Stern, 2000; Asafu-Adjaye, 2000; Ghosh, 2002; Soytas and Sari, 2003; Ghali and El-Sakka, 2004; Oh and Lee, 2004). Fourth-generation studies employ panel cointegration and panel-based error correction models providing more powerful tests compared to time series approach (see, e.g. Lee, 2005; Al-Iriani, 2006). The review of literature states that a relationship exists between energy use and economic growth. However, when it comes to whether energy use is a result of, or a prerequisite for, economic growth, there are no clear trends in the literature. Depending on the methodology used, and the country and time period studied, the direction of causality between energy consumption and economic variables has remained empirically elusive and controversial. There are very few studies concerning the relationship between energy use and GDP for oil exporting countries. This paper examines the energy–income relationship by exploiting a heterogeneous panel cointegration framework developed by Pedroni, 1995 and Pedroni, 1999 for 11 oil exporting countries listed in Table 1. The direction of causation between energy consumption and economic growth has significant policy implications for these countries, enjoying implicit generous subsidies1 (low domestic prices) for energy. If, for example, there exists unidirectional Granger causality running from income to energy, it may be implied that energy conservation policies such as phasing out energy subsidies or elimination of energy price distortions have little adverse or no effects on economic growth. On the other hand, if unidirectional causality runs from energy consumption to income, reducing energy consumption, for example through bringing domestic energy prices in line with market prices, could lead to a fall in income and employment. And lastly, no causality in either direction would indicate that policies for increasing energy consumption do not affect economic growth.The remainder of this paper is organized in the following fashion. Section 2 presents a brief overview of the economic and energy use profiles of the countries in the sample. Section 3 describes the data sources and the econometric methods of estimation and reports the empirical results for cointegration and causality tests. Some concluding remarks are presented in the final section.

The purpose of this study was to test for Granger causality between energy consumption and income for 11 oil-exporting developing countries over the period 1971–2002. The recently developed panel integration and cointegration techniques are applied to investigate the relationship between the two economic series: energy consumption and output. Utilizing Granger causality within the framework of a panel cointegration model, our findings suggest that there is one-way strong causality running from GDP to energy consumption with no feedback effects for oil exporting countries, so that it is the GDP that drives the energy consumption, not vice versa. Therefore energy conservation is a feasible policy with no damaging repercussions on economic growth for this group of countries. Energy prices are often heavily regulated in the countries that are net exporters of oil. In most of these countries, the energy sector is dominated by a few large state-owned enterprises and the government typically controls energy prices through export restrictions or other such measures. For example in Saudi Arabia in 2002, the after-tax price of gasoline was set at only US$0.19/l (Energy Information Administration, 2002). These below-market prices result in the implicit subsidization of energy consumption. In 1999, the average subsidy in major oil-exporting countries was 3.0% of GDP and 15.2% of government expenditure (Gupta et al., 2002). As a result, energy consumption growth has been much faster than economic growth. In other words, generous subsidies for energy are responsible for implausibly high energy intensity in these countries. High levels of domestic consumption resulting from these price distortions can even turn net exporters into net importers, as some analysts forecast may eventually happen in Iran (Dinmore, 2002). So, it has been recognized that price reform is a key policy element for achieving increased energy conservation and fuel substitution. As the relative price rise, it is expected that producers switch away from the now more expensive energy input to technologies which are less energy intensive. Our findings in this paper have important implications for energy policy in the oil exporting countries: given the generous subsidies for energy, there is relatively more scope for more drastic energy conservation measures without severe impacts on economic growth in these countries. In deed, it seems improbable that the elimination of energy price distortions restrain the economic growth in the oil exporting countries. However, subsidy reform should be embedded in a reform program that engenders broad support and yield widespread benefits. It should be noted that adequate increases in energy prices (and the removal of subsidies) would have an important impact on cost of living in urban and rural areas unless separate fiscal or social measures were taken to address specific problems of adjustment. Social impacts from the effects of the rise in energy prices on the different income groups of households could be mitigated by separate transfers to the low level income people through redistributing part of the increased government revenue.