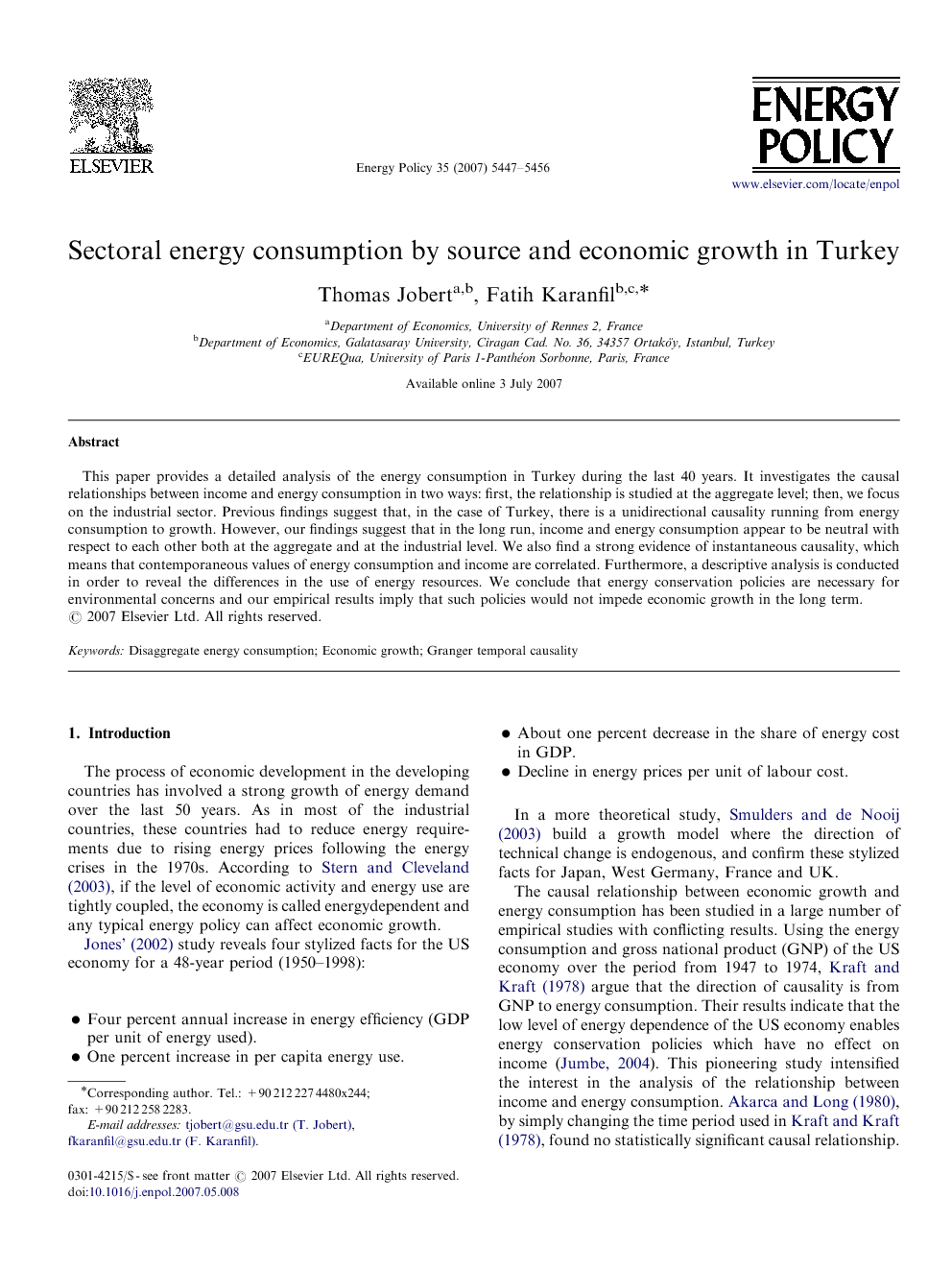 This paper provides a detailed analysis of the energy consumption in Turkey during the last 40 years. It investigates the causal relationships between income and energy consumption in two ways: first, the relationship is studied at the aggregate level; then, we focus on the industrial sector. Previous findings suggest that, in the case of Turkey, there is a unidirectional causality running from energy consumption to growth. However, our findings suggest that in the long run, income and energy consumption appear to be neutral with respect to each other both at the aggregate and at the industrial level. We also find a strong evidence of instantaneous causality, which means that contemporaneous values of energy consumption and income are correlated. Furthermore, a descriptive analysis is conducted in order to reveal the differences in the use of energy resources. We conclude that energy conservation policies are necessary for environmental concerns and our empirical results imply that such policies would not impede economic growth in the long term.

The process of economic development in the developing countries has involved a strong growth of energy demand over the last 50 years. As in most of the industrial countries, these countries had to reduce energy requirements due to rising energy prices following the energy crises in the 1970s. According to Stern and Cleveland (2003), if the level of economic activity and energy use are tightly coupled, the economy is called energydependent and any typical energy policy can affect economic growth. Jones’ (2002) study reveals four stylized facts for the US economy for a 48-year period (1950–1998): • Four percent annual increase in energy efficiency (GDP per unit of energy used). • One percent increase in per capita energy use. • About one percent decrease in the share of energy cost in GDP. • Decline in energy prices per unit of labour cost. In a more theoretical study, Smulders and de Nooij (2003) build a growth model where the direction of technical change is endogenous, and confirm these stylized facts for Japan, West Germany, France and UK. The causal relationship between economic growth and energy consumption has been studied in a large number of empirical studies with conflicting results. Using the energy consumption and gross national product (GNP) of the US economy over the period from 1947 to 1974, Kraft and Kraft (1978) argue that the direction of causality is from GNP to energy consumption. Their results indicate that the low level of energy dependence of the US economy enables energy conservation policies which have no effect on income (Jumbe, 2004). This pioneering study intensified the interest in the analysis of the relationship between income and energy consumption. Akarca and Long (1980), by simply changing the time period used in Kraft and Kraft (1978), found no statistically significant causal relationship. The neutrality hypothesis is also found by Yu and Hwang (1984), Yu and Choi (1985), Yu and Jin (1992) and Cheng (1995). However, empirical studies focusing on some developing countries give disparate estimations of the causal relationship; e.g. for different time periods, in Indonesia the direction of Granger causality (Granger, 1988) is from income to energy (Masih and Masih, 1996), but Fatai et al. (2004) found a unidirectional causality running from energy consumption to income. For the same country, energy and income were found to be neutral with respect to each other at least in the short run (Asafu-Adjaye, 2000). The empirical evidence is mixed also for industrialized countries; e.g. Erol and Yu (1987) found a significant causal relationship between income and energy consumption in the case of Japan for the period 1950–1982, supporting the view that Granger causality runs from energy consumption to income. However, this result does not hold in a more restricted period, 1950–1973. Recently, Lee (2006) pointed out that their results are spurious and that the direction of causality runs from income to energy consumption. Inconsistent results concerning the direction of the relationship might be due to (1) methodological differences and (2) the time period chosen. In recent studies, the cointegration technique, used first by Engle and Granger (1987), is commonly utilized to test for long-run equilibrium relationships. Johansen (1991) and Johansen and Juselius (1990) use the maximum likelihood procedure to detect Granger causality; if two or more variables are cointegrated and have common trends, there is at least one long-run relationship between these variables; hence, the direction of Granger causality can be tested through the vector-error correction model (VECM). Using this methodology, Soytas and Sari (2003) found, in the long run, a unidirectional causality running from energy consumption to GDP per capita and, in the short run, a bidirectional relationship in Turkey. In a very recent study, Lise and Van Montfort (forthcoming), using annual data over the period 1970–2003, found that, in Turkey, energy consumption and GDP are cointegrated and that there is a unidirectional causality running from GDP to energy consumption. For the same country, Sari and Soytas (2004), utilizing a small sample of disaggregate energy consumption and GDP (31-year period from 1969 to 1999), pointed out that 21 percent of the forecast error variance of GDP is explained by total energy consumption. This result is obtained through the generalized forecast error variance decomposition developed by Koop et al. (1996) and Pesaran and Shin (1998). The main advantage of this method is that it provides robust results regardless of the order in which the variables are entered into the VAR. Although all of these studies contribute to investigating the relationship between energy consumption and economic growth, they have not sufficiently shed light on the dynamics of this relationship. We feel that the evolution of energy consumption and economic growth can be more efficiently analysed if different sectors and different energy sources are taken into consideration, together with economic indicators such as population growth, capital intensity and sectoral production. The complexity of relationships among these variables requires a re-examination of the long-term linkage between energy consumption and income in Turkey. The paper has two important findings. First, it supports the neutrality of energy in Turkey. Hence, energy conservation policies may not be a stimulus to economic growth. Secondly, as in Greece (Hondroyiannis et al., 2002), energy use in industrial production in Turkey increased considerably, despite the 1970s’ oil price shocks. This is a result of increasing capital intensity at the same time in Turkish industry. Hence, this pattern of economic development does not seem to be supported by energy-saving technical progress. The paper is organized as follows. In Section 2, we describe economic developments and the pattern of development of total energy consumption in Turkey since 1960s. We find no evidence of long-run relationship, and energy and income appear to be neutral with respect to each other. We then analyse trends in consumption in a sectoral level by energy type. In Section 3, we examine the links between production and energy consumption in the industrial sector and give possible explanations for the econometric results that this research provides. We present the conclusions of our study and discuss policy implications in Section 4.

In this paper, cointegration and Granger causality tests were applied in order to re-examine the long-run and causal relationship between real GNP and energy consumption in Turkey for the period 1960–2003. Our results show that there is no stationary linear cointegrating relationship between these two variables. Despite remarkable GNP per capita growth and stability in energy intensity, the neutrality hypothesis between real GNP and energy use in Turkey seems to hold. A sectoral analysis was conducted by using cointegration and causality tests for the Turkish industry sector. The results imply that industrial energy consumption and industrial value added are neutral with respect to each other. We have chosen the industrial sector for at least two reasons: first, as we mentioned, the share of industry in total energy consumption increased at an average annual rate of 7 percent, and today industry is the biggest energy consumer sector in Turkey. The second reason, which is environmental rather than economic, is that fossil resources such as petroleum products and low-calorie domestic lignite are extensively used in the industrial sector. Therefore, the industrial sector is the second largest contributor to CO2 emissions in Turkey. Our findings provide policy implications that may be used to determine future energy policy concerning economic growth and environmental protection. As the results confirm the neutrality hypothesis, in the case of Turkey, in the long run, an energy-saving programme can be followed both at the national and at the industrial level without harming economic growth. Furthermore, decreasing energy intensity will reduce dependence on energy imports. For the environmental question, significant efforts have to be made to intensify R&D on energy technologies in order to switch to less carbon-intensive energy use. The MENR, the EIGM and the EMRA should take the necessary measures to encourage the use of renewable energy resources. For this purpose, the law on utilization of renewable energy resources that encompasses wind, solar, geothermal, biomass, biogas, wave, current and tidal energy resources has been adopted on 18 May 2005. Besides, Turkey reopened its nuclear programme in order to have three nuclear power plants in operation by 2015. Such developments are expected to reduce CO2 intensity in Turkey in the near future.