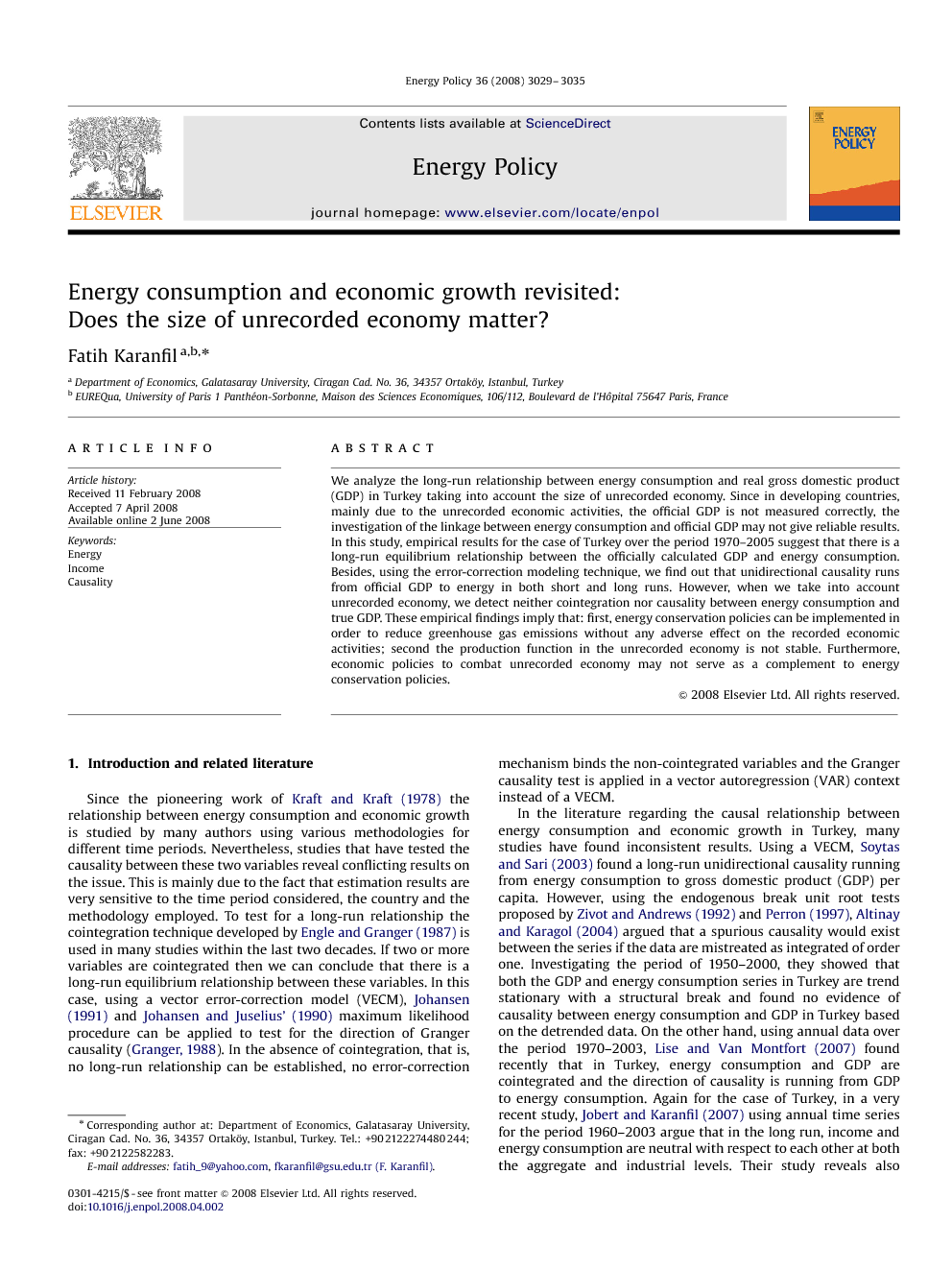 In this paper we study the Turkish energy–income linkage taking into account the size of unrecorded economy. Cointegration and Granger causality tests are conducted in two different models: with and without unrecorded economy. We find that there is a long-run equilibrium relationship between officially calculated GDP and energy consumption. In this case, we employed a VECM to test for Granger causality and we concluded that there is a long-run and joint causality (in both short and long runs) from official GDP to energy consumption. However, when we take into account unrecorded economy, we employed a VAR model instead of a VECM, because we found strong evidence that the variables are not cointegrated. Empirical results suggest that TGDP and energy consumption are neutral with respect to each other. These results could provide an answer to the question that we have posed in the present paper: in the energy consumption-income nexus how does unrecorded economy matter? While official GDP Granger causes energy use, the evidence in favor of neutrality of energy consumption with respect to TGDP signifies that energy consumption is fundamentally induced by recorded economic activities. Some key policy implications emerge from this finding. In order not to have problems in meeting energy demand in the future, an energy conservation policy may very well be feasible in Turkey without causing harm to official GDP. Such a policy may be achieved by a combination of regulatory measures and economic instruments such as energy-saving technical progress, energy taxes or subsidies like hydro, wind, solar and geothermal energy. However, we should keep in mind that if environmental taxes are used without reducing the overall economic costs associated with the tax system, no double dividend occurs, hence the shift in tax burden, which is certainly the driving source behind the unrecorded economy, may increase the size of unrecorded economy. On the other hand, structural reforms and adjustment policies that should be implemented by Turkish governments aiming at decreasing the size of unrecorded economy may have no effect on the country's energy consumption in the long run. This is because according to our empirical results, energy input does not seem to be an essential factor of production in unrecorded activities. This conclusion is not surprising since unrecorded economy is generated by mainly tax evasion in economic activities like peddling or hawking. Finally we must mention that the same analysis should be made for other developing countries in order to have some comparative results and then future research should focus on these issues to assess the generalizability of the results given in this study.