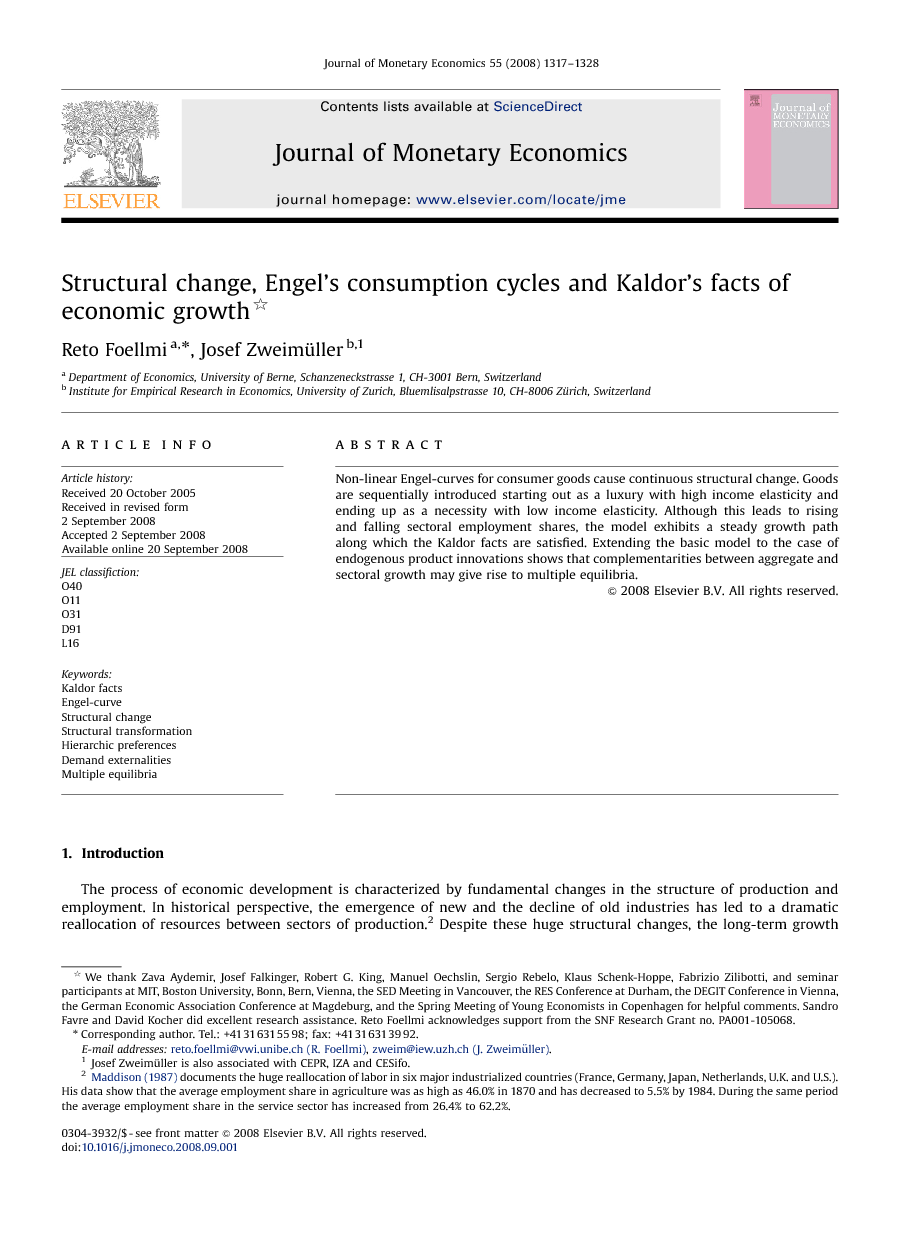 Non-linear Engel-curves for consumer goods cause continuous structural change. Goods are sequentially introduced starting out as a luxury with high income elasticity and ending up as a necessity with low income elasticity. Although this leads to rising and falling sectoral employment shares, the model exhibits a steady growth path along which the Kaldor facts are satisfied. Extending the basic model to the case of endogenous product innovations shows that complementarities between aggregate and sectoral growth may give rise to multiple equilibria.

Two dominant features of the long-run growth process were reconciled in this paper: the dramatic changes in the structure of production and employment; and the Kaldor facts of economic growth. Our model has focused on the demand-explanation of structural change which is based on the idea that households expand their consumption along a hierarchy of needs. In such a context structural change results from differences in income elasticities across sectors. The paper proposed a specification of hierarchic preferences featuring realistic patterns of structural change while also generating an equilibrium growth path that is consistent with the Kaldor facts. Furthermore, a simple numerical example showed that our model can capture realistic patterns of structural change. In particular, the model predicts not only monotonically decreasing (increasing) employment in agriculture (services) but also a manufacturing share that first increases and then decreases in the course of economic development. In contrast to previous approaches that try to explain the Kaldor facts together with changes in the structural composition of output, our approach has studied the non-homothetic nature of preferences together with a situation where new goods are sequentially introduced. In our model, new goods start out as luxuries with a high income elasticity and finally become necessities with a low income elasticity. In this sense, our paper presents a model of rising and stagnating products and highlights the importance of structural changes also within broadly defined sectors. While our basic model was presented in the context of exogenous technical progress where new goods are introduced without any costs, our analysis was extended to study endogenous growth. In such a framework, it was shown that hierarchic preferences highlight interesting interactions between structural change and long-run growth. On the one hand, the aggregate growth rate depends on structural change because innovation incentives are crucially determined by the growth rates in the new industries. On the other hand, the speed of structural change is itself determined by aggregate growth. The resulting complementarities between sectoral and aggregate growth open up the possibility for multiple equilibria. Hence our model is not only capable of yielding insights into the process of growth and structural change, but sheds also light on the question why some countries experience high long-term growth and many industries take off, while in other countries there is neither a change in the production structure nor increases in aggregate productivity. Our model can be extended in several directions. Two extensions are most promising. First, while our analysis has focused on a representative consumer, the introduction of consumer heterogeneity is potentially interesting. As preferences are non-homothetic, rich and poor households will consume different consumption bundles which opens up a new channel by which income inequality could affect growth and structural change (Foellmi and Zweimüller, 2006). Second, hierarchic preferences in a world economy with rich and poor countries would imply interesting patterns of growth and the international division of labor. Our model provides a natural way of modelling the Linder-hypothesis (Linder, 1961) and/or the product-cycle hypothesis (Vernon, 1966). A rich country faces high home-demand and hence will innovate early. The poor country will first import new goods, but later on start to imitate. Hence rich countries will produce new goods with a high income elasticity and poor countries will produce old goods with a low elasticity. Our set-up may also be useful to understand the mixed empirical evidence concerning the Prebisch/Singer-hypothesis (Prebisch, 1950 and Singer, 1950) according to which the terms of trade for the poor countries deteriorate as their exports are concentrated on goods with low income elasticities.20