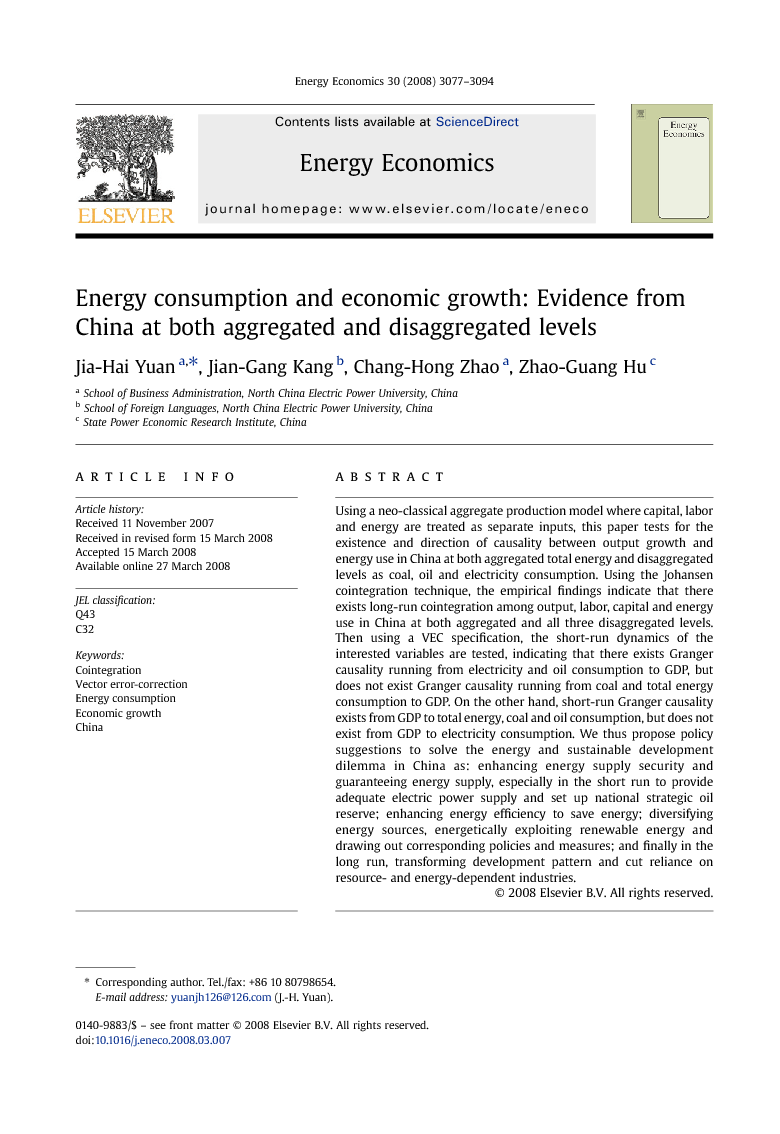 Using a neo-classical aggregate production model where capital, labor and energy are treated as separate inputs, this paper tests for the existence and direction of causality between output growth and energy use in China at both aggregated total energy and disaggregated levels as coal, oil and electricity consumption. Using the Johansen cointegration technique, the empirical findings indicate that there exists long-run cointegration among output, labor, capital and energy use in China at both aggregated and all three disaggregated levels. Then using a VEC specification, the short-run dynamics of the interested variables are tested, indicating that there exists Granger causality running from electricity and oil consumption to GDP, but does not exist Granger causality running from coal and total energy consumption to GDP. On the other hand, short-run Granger causality exists from GDP to total energy, coal and oil consumption, but does not exist from GDP to electricity consumption. We thus propose policy suggestions to solve the energy and sustainable development dilemma in China as: enhancing energy supply security and guaranteeing energy supply, especially in the short run to provide adequate electric power supply and set up national strategic oil reserve; enhancing energy efficiency to save energy; diversifying energy sources, energetically exploiting renewable energy and drawing out corresponding policies and measures; and finally in the long run, transforming development pattern and cut reliance on resource- and energy-dependent industries.

The role of energy in economic growth has long been a controversial topic in economics literature. The traditional neo-classical growth model, treating energy inputs as intermediate whereas land, labor and capital as basic factors, takes the role of energy in production as neutrality. On the other hand, the biophysical and ecological view is that energy plays an important role in income determination, and thus the economies heavily dependent on energy use will be significantly affected by changes in energy consumption (Cleveland et al., 1984, among others). Beaudreau (1995) criticizes the traditional growth model for treating energy as a secondary factor and points out that for an engineer production is not possible without energy use. From an economist's perspective this calls for considering energy as an important input for production. Theoretical disagreement on the role of energy is matched by mixed empirical evidence. Ever since the seminal work of Kraft and Kraft (1978), a rapidly increasing body of literature has assessed the empirical evidences for both developed and developing countries employing cointegration and Granger causality model (see Lee, 2005, Lee, 2006 and Chontanawat et al., 2007 for a review of the state of the art). More recent studies mostly in a bivariate model (see Zamani, 2007, Lise and Van Montfort, 2007, Chen, 2007, Lee and Chang, 2007, Mehrara, 2007, Narayan et al., 2007, Narayan and Singh, 2007 and Zachariadis, 2007; among others) still don't come to a consensus on the role of energy in economic development. Though bivariate model has merit that they can be employed with scarce data, recently its limitation to describe energy–economy interactions has been criticized. Stern, 1993 and Stern, 1997, Asafu-Adjaye (2000), Glasure (2002) and Stern and Cleveland (2003) point out the importance of omitted variables and argue that multivariate model can offer multiple causality channels which, under a bivariate approach, may remain hidden or can lead to spurious correlations and erroneous conclusions. Employing a four-variable VAR model (capital, labor, energy consumption, and GDP), Stern (1993) found Granger causality that runs from energy to GDP. The results were, in general, consistent with the argument in biophysical models. Adding several other variables into the VAR model, Glasure and Lee (1997) observed a bi-directional causality between energy and GDP growth. Asafu-Adjaye (2000) then included the consumer price index as a proxy for energy prices for Asian economies, but uniform results were not found. Stern (2000) further investigated the USA case using multivariate cointegration tests, and the long-run cointegrated relationships were observed between energy use and GDP. Hondroyiannis et al. (2002) included price development as a proxy for economic efficiency in Greece, and cointegration was found within a multivariate system. Employing a four-variable model (value-added, capital, labor and energy), Soytas and Sari (2007) also found unilateral Granger cause running from electricity consumption to output in Turkish manufacturing industry. Although multivariate analysis is commonly used in the recent literature, there does not seem to be a theoretical background in most of the studies. Hence, a variety of macro variables have been considered in empirical studies. Probably a more formal treatment is provided in Ghali and El-Sakka (2004) as well as in Soytas and Sari, 2006 and Soytas and Sari, 2007. Ghali and El-Sakka (2004) assume a neo-classical one-sector production function with three inputs for Canada and find bilateral causality between energy use and output. Soytas and Sari (2007) also assume a neo-classical production for Turkish manufacturing industry. Their results are against the neo-classical assumption of neutrality of energy to growth. As the second largest energy consumer and CO2 emitter in the world until 2004, relation between energy and economic growth in China has been a worldwide concern in both policy sector and scholarship society. Empirical works at both aggregated energy consumption (Soytas and Sari, 2007 and Soytas and Sari, 2006) and disaggregated levels have been presented (Lin, 2003, Shiu and Lam, 2004 and Yuan, 2007 for electricity, Zhou and Chau, 2006 for oil) but with mixed results. The lack of consensus may be due to the fact that, different studies cover different time periods, use different data (and data manipulation) and more importantly, different test models. As noted by Ghali and El-Sakka (2004), whether proposition of neutrality of energy in income determination is true is best to be tested in a neo-classical aggregated production framework, taking capital, labor, and energy as separate inputs. Soytas and Sari (2007) also point out that different countries have different energy consumption patterns and various sources of energy. Hence, different sources of energy may have varying impacts on the output of an economy. In our opinion, different countries are in utterly different developing stages and developing process may also have significantly different impact on energy and economic growth relation, thus it may be unwise to expect for consensus on the role of energy in economic growth. As for a country to be studied, both aggregated and disaggregated data with long enough time periods should be examined. The aim of this paper is to empirically investigate the causal interactions between energy use and output growth in China. Aggregated level of total energy consumption, as well as disaggregated level of coal, oil and electricity consumption is tested. We use a framework based on the neo-classical one-sector aggregate production technology where capital, labor, and energy are treated as separate inputs. Within this framework, we use the time series properties of the data and employ a vector error-correction (VEC) model to test for multivariate cointegration and Granger causality. Generalized impulse response technique is used in the paper for robustness analysis. The remainder of the paper is organized as follows: Section 2 describes the model and econometric methodology used in the study; Section 3 discusses the data used in the paper and unit root tests; Section 4 presents the cointegration results and Section 5 the vector error-correction model and Granger causality test results. Section 6 presents the generalized impulse response analysis to the results, followed by policy analysis in Section 7 and finally the conclusions.

This paper tests energy consumption and economic growth relationship for China in a neo-classical aggregate production model at both aggregated total energy and disaggregated levels of coal, oil and electricity consumption. The empirical findings indicate that there exists long-run cointegration among output, labor, capital and energy use in China at both aggregated and disaggregated levels. Granger causality tests indicate that, there exists Granger causality running from electricity and oil consumption to GDP, but Granger causality running from coal and total energy consumption to GDP does not exist. On the short run, Granger causality exists running from GDP to total energy, coal and oil consumption, but does not exist for GDP to electricity consumption. An important policy implication of the analysis is that China is an energy-dependent economy and that energy is a limiting factor to output growth in China. Thus, energy strategy should be deliberately considered by policy maker. Especially in the short-run insufficiency of electricity and oil supply will hamper the pace of economic growth seriously, thus priority development of electric sector and strategic oil reserve should be emphasized by policy makers in China. On the other hand, if China's output structure keeps on, the energy sector as well as the economy as a whole will not be sustainable. Thus China must jump to a more efficiency-oriented and less resource-depleted development pattern and cut its reliance on resource and energy intensive industries. The energy vs. sustainable development dilemma in China can only be resolved by joint efforts on both energy efficiency enhancement and economic structure adjustment. The main contribution of the paper is to empirically investigate the relation of economic growth and energy consumption for China at both aggregated and disaggregated levels with uniform time series econometric model. Due to the unique social and economic background and development approach in China, we should be cautious with the generality of our findings and remind that it may only apply to the energy-dependent developing countries. And finally, due to the availability of the data, our results may be biased because of the small sample size, proxy measure of capital stock and potential data quality problems.