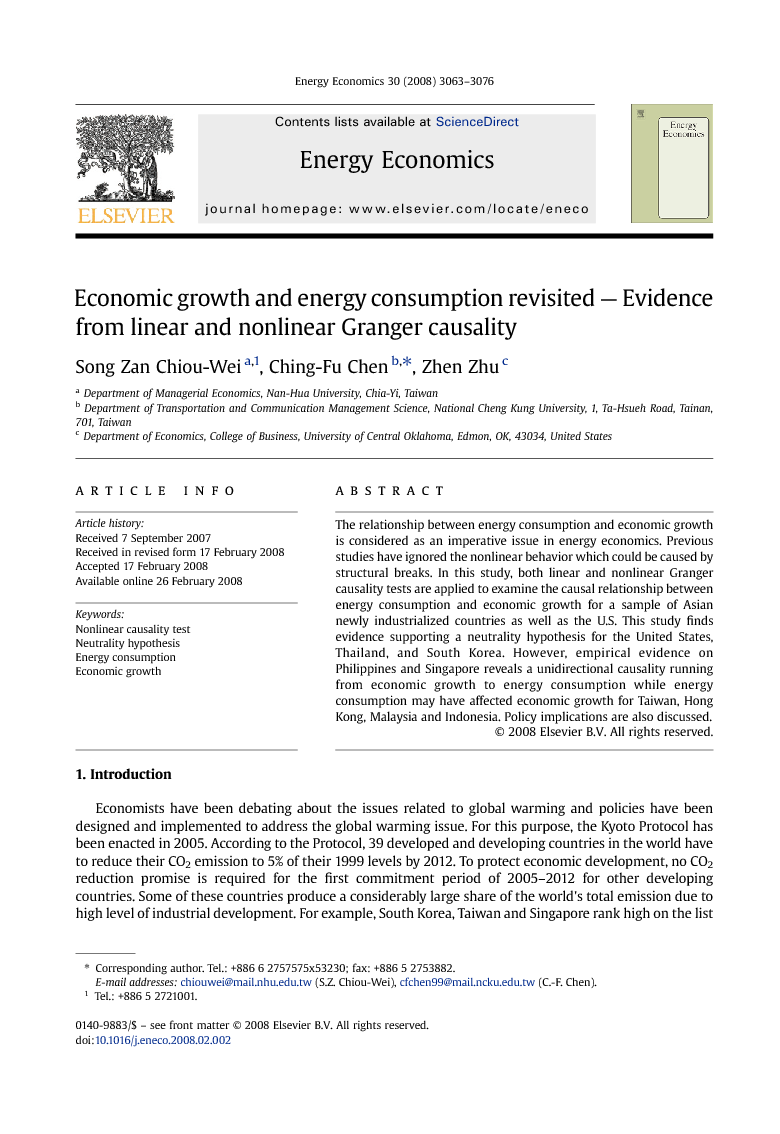 Economists have been debating about the issues related to global warming and policies have been designed and implemented to address the global warming issue. For this purpose, the Kyoto Protocol has been enacted in 2005. According to the Protocol, 39 developed and developing countries in the world have to reduce their CO2 emission to 5% of their 1999 levels by 2012. To protect economic development, no CO2 reduction promise is required for the first commitment period of 2005–2012 for other developing countries. Some of these countries produce a considerably large share of the world's total emission due to high level of industrial development. For example, South Korea, Taiwan and Singapore rank high on the list of CO2 emission: 9th, 22nd and 39th, respectively. Therefore, these countries are considered to be the candidates to reduce their CO2 emissions in the following period. The issue of the possible impact of emission reduction on economic growth inevitably arises due to the possible connection between emission and energy consumption, and energy consumption and economic growth. Due to the importance of the possible connection between energy consumption and economic growth, there is a growing literature in this area. In general, studies find evidence of correlation between these two variables for countries with different economic structure and at different stages of economic development. Studies on the bi-directional relationships can be traced back to Kraft and Kraft (1978). They applied the Granger causality test to U.S. data for the period of 1947–1974, and found that a unidirectional causality runs from economic growth to energy consumption, thus suggesting that an energy conservation policy is feasible. Since Kraft and Kraft (1978), there has been a vast body of studies contributing to this literature. Table 1 summarizes related studies. One observation from the table is that these studies yield mixed and often conflicting results for both developed and developing countries due to different methods, sample periods, and model specifications being employed. Furthermore, it is worth noting that most previous studies are limited in scope to the applications of linear models. However, economic events and regime changes such as changes in economic environment, changes in energy policy and fluctuations in energy price can cause structure changes in the pattern of energy consumption for a given time period under study. This creates a room for a nonlinear rather than linear relationship between energy consumption and economic growth (Lee and Chang, 2005).Looking at the time trends of energy consumption for sampled Asian developing countries as in Fig. 1, one can observe one or more possible breaks. Some studies considered these possible structure changes in the time series. For example, Lee and Chang (2005) used the cointegration test to examine the structural breaks in the Taiwanese energy consumption for the period of 1954–2003, and identified the points of structure break in energy consumption and GDP. Given the evidence of structural breaks within the series, a nonlinear relation has to be taken into account when one investigates the relationship between energy consumption and economic growth. The Granger causality test (Granger, 1969) is based on the assumption of linear relationships between variables, and is therefore not able to explore the nonlinear causal relationship. Baek and Brock (1992) proposed a nonlinear Granger causality test to deal with the nonlinearity issue. Through using Monte Carlo simulation, they showed that forecasting performance of linear models decreases in the presence of nonlinearity, and the forecasting performance of nonlinear models is better than that of linear models. For this reason, the nonlinear Granger causality test has been widely employed in many fields such as macroeconomics and finance (Hiemstra and Jones, 1994). In order to apply the nonlinear causality test, linear dependence is removed. For this purpose, this study applies a VAR model to remove any linear dependencies and then uses the BDS test by Brock et al. (1987) to test any nonlinear dependencies among the residuals. Our study focuses on Asian developing countries in a hope to provide more definitive evidence between energy consumption and economic growth to aid their policy design and implementation.