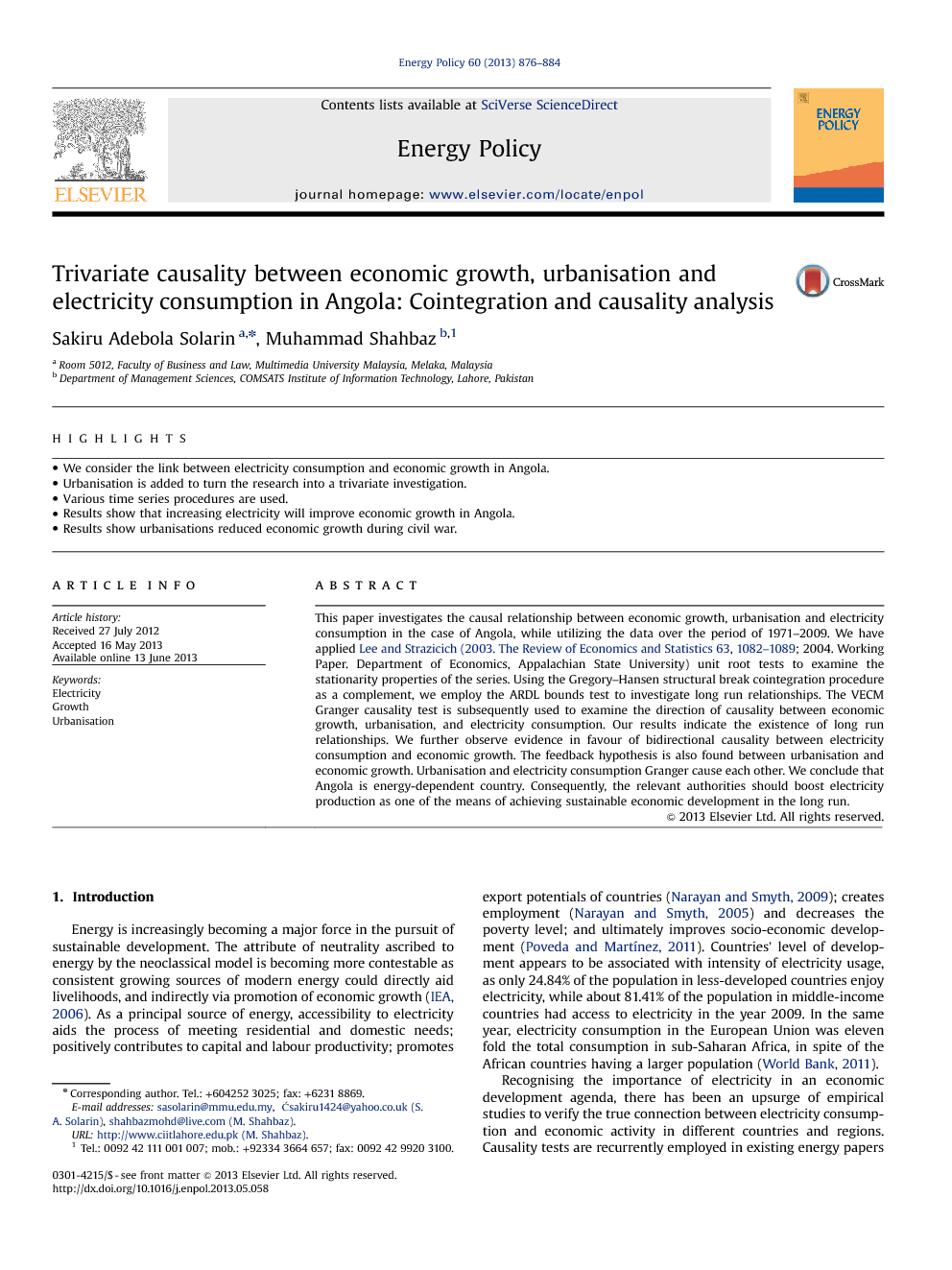 This study investigates causality between economic growth and electricity consumption in Angola over the period 1971–2009. The model is augmented with urbanisation as a control variable. We applied the ARDL bounds testing approach to examine cointegration and the VECM Granger causality approach to detect direction of causal relationship between the variables. Three cointegrating vectors were established, suggesting the existence of long run relationship between the variables. Results illustrate bidirectional causality between electricity consumption and economic growth, in line with the findings of Odhiambo (2009a) for South Africa, a fellow African country. Feedback hypothesis is observed between urbanisation and economic growth, and between electricity consumption and urbanisation. Besides, long run coefficients of the three estimators (the ARDL, the FMOLS and the DOLS) generally indicate that Angola's electricity consumption positively contribute to economic growth. The coefficients were weakened, with less positive impact of electricity consumption on economic growth during the period of the civil war. These foregoing results support the energy expansionist view. As a result, authorities in Angola must not only continue to invest in the area of electricity generation, but also explore other sources of electricity in the country. Being an oil-abundant country, natural gas as a source of electricity should be stimulated, which will not only lessen electricity cost, but also reduce health hazard triggered by gas flaring in the country. In the area of transmission and distribution of electricity, promotion of private participation to complement the (inadequate) distribution capacity of ENE (National Electricity Company) and EDEL (Electricity Distribution Company of Luanda) is necessary to further liberalise the sector. Local initiatives and contributions should be encouraged in combination with foreign involvement. Similarly, fair competition among potential private distributors may turn out to be a catalyst for the growth of energy in the country. Outside the period of the civil war, rapid urbanisation is attributable to developing countries that can either positively influence an economy through technological creativity and economic progress, or negatively impact the economy via its effect on straining infrastructures (Alam et al., 2007). It is left for policy-makers and planners to shape urbanisation policies in such a way as to make it a positive force for economic development, especially when pursuing energy expansionist programmes. Relevant policies to encourage the contribution of urbanisation involve infrastructure investments, trade protection policies, and price controls (Henderson, 2003). Above all, effective regulation of the electricity market is needed in securing quality of service, adequacy of technical, commercial and managerial know-how of staff, fair tariffs to electricity users, reasonable remuneration for potential investors, and creation of an accommodating atmosphere. The authorities should borrow a leaf from modern national standards and international best practices in setting the blueprint for the electricity sector. For future research, the present study may be reinvestigated by incorporating capital and labour as trade openness and financial development as potential determinants of economic growth, following Shahbaz and Lean (2012a) and (Sadorsky., 2010 and Sadorsky., 2011). Financial development may affect the economy by offering cheaper loans to consumers and producers. Trade openness may also influence growth through an exports-enhancement effect, and importing energy-efficient technology to be used in the production of electricity to increase domestic output. An investigation of the sectoral electricity-growth nexus would not only provide rigorous empirical analysis, but would also help policy-makers in articulating a comprehensive energy policy to sustain economic growth over the long run.