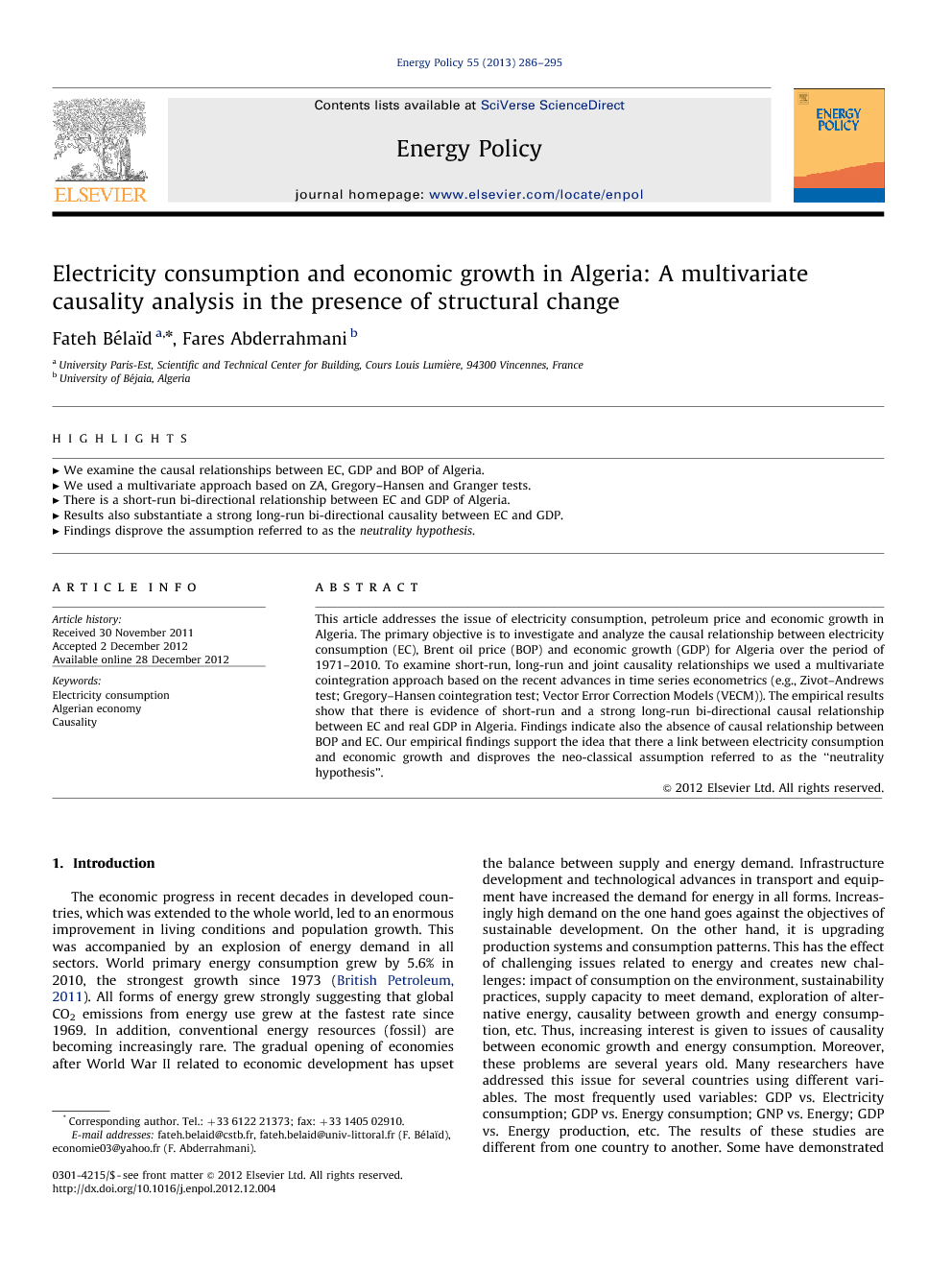 This article addresses the issue of electricity consumption, petroleum price and economic growth in Algeria. The primary objective is to investigate and analyze the causal relationship between electricity consumption (EC), Brent oil price (BOP) and economic growth (GDP) for Algeria over the period of 1971–2010. To examine short-run, long-run and joint causality relationships we used a multivariate cointegration approach based on the recent advances in time series econometrics (e.g., Zivot–Andrews test; Gregory–Hansen cointegration test; Vector Error Correction Models (VECM)). The empirical results show that there is evidence of short-run and a strong long-run bi-directional causal relationship between EC and real GDP in Algeria. Findings indicate also the absence of causal relationship between BOP and EC. Our empirical findings support the idea that there a link between electricity consumption and economic growth and disproves the neo-classical assumption referred to as the “neutrality hypothesis”.

The economic progress in recent decades in developed countries, which was extended to the whole world, led to an enormous improvement in living conditions and population growth. This was accompanied by an explosion of energy demand in all sectors. World primary energy consumption grew by 5.6% in 2010, the strongest growth since 1973 (British Petroleum, 2011). All forms of energy grew strongly suggesting that global CO2 emissions from energy use grew at the fastest rate since 1969. In addition, conventional energy resources (fossil) are becoming increasingly rare. The gradual opening of economies after World War II related to economic development has upset the balance between supply and energy demand. Infrastructure development and technological advances in transport and equipment have increased the demand for energy in all forms. Increasingly high demand on the one hand goes against the objectives of sustainable development. On the other hand, it is upgrading production systems and consumption patterns. This has the effect of challenging issues related to energy and creates new challenges: impact of consumption on the environment, sustainability practices, supply capacity to meet demand, exploration of alternative energy, causality between growth and energy consumption, etc. Thus, increasing interest is given to issues of causality between economic growth and energy consumption. Moreover, these problems are several years old. Many researchers have addressed this issue for several countries using different variables. The most frequently used variables: GDP vs. Electricity consumption; GDP vs. Energy consumption; GNP vs. Energy; GDP vs. Energy production, etc. The results of these studies are different from one country to another. Some have demonstrated the presence of a bidirectional causality (Glasure and Lee, 1997 and Belloumi, 2009), others have found the presence of a unidirectional causality (Morimoto and Hope, 2004 and Mazbahul and Nazrul, 2011), and other non-presence of causality (Glasure and Lee, 1997). We discuss some of these studies in Section 2. However, despite the expanding literature on the field of the causality between energy/electricity consumption there have been no empirical studies on Algeria. At present none have focused on the causal relationship between electricity consumption and GDP for Algeria. The central question now is whether energy consumption stimulates, delays or is neutral to the economic growth. Two views have emerged in the literature analyzing the relationship between energy consumption and economic growth (Belloumi, 2009). The first strand considers that the impact of energy on growth is minimal or neutral. This is based on the fact that the consumption of energy cannot affect economic growth because the cost of energy is very small as a proportion of GDP. This assumption is known in the literature as the “neutrality hypothesis” (Yu and Choi, 1985 and Squalli, 2007). The second strand believes that energy is not neutral to growth as long as energy is the main source of value and the other factors of production such as capital and labor cannot function without energy. Thus, energy is assumed to play a fundamental role in achieving social, technological, and economic progress (Ebohon, 1996 and Templet, 1999). For the proponents of this hypothesis, a deficiency in energy supply may limit economic growth and technological progress. The hypothesis stems from the fact that energy was a major source of improved living standards in advanced countries and played a crucial role in advancing science and technology in these countries (Rosenberg, 1998). The strong dependence of the Algerian economy on oil revenues and prices of fossil fuels raises several questions for future economic and energy policies. This requires the adoption of an economic recovery plan that covers the short, medium and long term. The plan should focus on energy issues. The priority is the choice of an effective energy policy that will determine the optimal model of rational consumption and exploitation of fossil resources. This model must consider, first, how to reduce dependence on fossil fuels and develop renewable energy before the fateful date of exhaustion of the fossil energies. Second, the environmental constraints in order to reduce greenhouse gas emissions (GHGE) related to energy consumption. We propose in this article to present an empirical study of causal relationships between electricity demand and economic activity in Algeria. We will focus on a relationship between electricity consumption, oil price and GDP growth in Algeria. Economic activity is represented by the real gross domestic product per capita, energy by electricity power consumption (kWh per capita) and oil price by Brent crude oil price. The aim is to shed light on the possible sources and directions of the relationship between electricity consumption, oil price and economic growth. The study can provide ideas on the design and the implementation of future economic and energy policies in Algeria. In addition to the introductory section (Section 1), the rest of the paper is organized as follows: Section 2 presents the state of the art dealing with literature on the subject of causality between energy consumption and economic growth. Section 3 gives an overview of the economic situation in Algeria. It is followed by a brief presentation of the specifics of the electricity market in Algeria (Section 4). Section 5 describes the data and the model specification. We report our empirical findings in Section 6. Based on the results of the model, we draw conclusion and provide some policy implications based on the empirical results (Section 7).

In this article we examined the causal relationship between electricity use and GDP in Algeria. In view of this purpose, we mobilized an econometric model based on unit root test (ADF, PP, DF-GLS and ZA tests), Johansen and Gregory–Hansen tests, and VECM to assess the source and the direction of the possible causal relationship between electricity consumption, GDP and BOP in Algeria. The empirical results show a bi-directional short-run relationship between electricity consumption and real GDP for Algeria and a strong linear bi-directional long-run causality between the two variables in the long run. Short-run causality explains electricity generation directly affects economic activity. Long-run causality implies that the policy of “electricity generation must lead economic growth” should be reinforced for a long period in Algeria. We conclude that electricity is a limiting factor to GDP growth in Algeria. These empirical findings support the assumption that there has been a coupling of electricity consumption and economic growth and reject the neo-classical assumption that energy is neutral to growth. The findings lay emphasis on electricity consumption as a pre-requisite of achieving higher GDP growth for Algeria. A high level of economic activity leads to a high level of electricity demand. This implies that priority should be given to electricity management, generation, and distribution to satisfy the electricity demand of the economic activity, both in short and medium term. With the rise of electricity consumption in Algeria, it is important for Algeria's government to plan, and build enough generating capacity to satisfy the demand and avoid any adverse effect electricity shortage. Furthermore, they should also strive to reduce electric distribution and transmission losses which are currently estimated at around 20%. Losses are mainly due to fraud and theft of electricity. Therefore reduction of non-technical losses, need to be given due priority in immediate and mid-term policies. Electricity theft can be reduced by applying technical solutions such as tamper-proof smart meters and insulated cables, managerial methods such as inspection and monitoring. In the long term, it can be also opined that Algeria could pursue the effort of power generation from other non-conventional and renewable sources such as solar and wind power, while granting an important role to energy savings, to electricity tariff rationalization and to energy efficiency. On the other hand there is a need of reforms to stimulate private entrepreneurs participation in developing energy sectors, provide favorable fiscal incentives, more active partnership and more freedom of action for national companies, especially in view of growing demand of electricity. The causal relationship mentioned above emphasize an intense electricity demand which suggests that economic growth in Algeria appears to results in higher electricity consumption. The long term extension of the national electricity consumption pattern can affect the existing supply–demand balance for this energy source. In fact, electricity supply must keep pace with the needs of the economic growth on the one hand, and meet the growing needs of comfort for the Algerian population fuelled by the significant improvement in living standards, on the other. In view of the above results, Algeria is in urgent need of an adequate energy infrastructure so that it can achieve higher levels of economic development. Algeria will have to understand that fossil energy is coming to an end and that renewable energy is the main source of the future energy. It is recommended that Algeria preserve its hydrocarbon reserves by the exploitation of the renewable energy resources, particularly solar power. The large exploitation of the solar field with the aim of producing electricity will contribute to satisfying national energy needs and will eventually be exported to European countries in the long term. Due to its strategic geographical situation and its significant renewable energy potential, notably high sunshine levels, Algeria is very likely to play a key role in future trans-Mediterranean renewable electricity supply scheme. In view of the increasing interest in renewable energies and their stakes, Algeria should integrate their development into its energy policy by adopting a legal framework favorable to their promotion and to the development of the concerned infrastructures. The results above could provide policymakers with a better understanding of the relationship between GDP and electricity consumption, thus offering some guidance on economic performance policy in Algeria. In fact, interpretations of the above findings ought to be treated with caution although the procedures used provide consistent results for the most part.