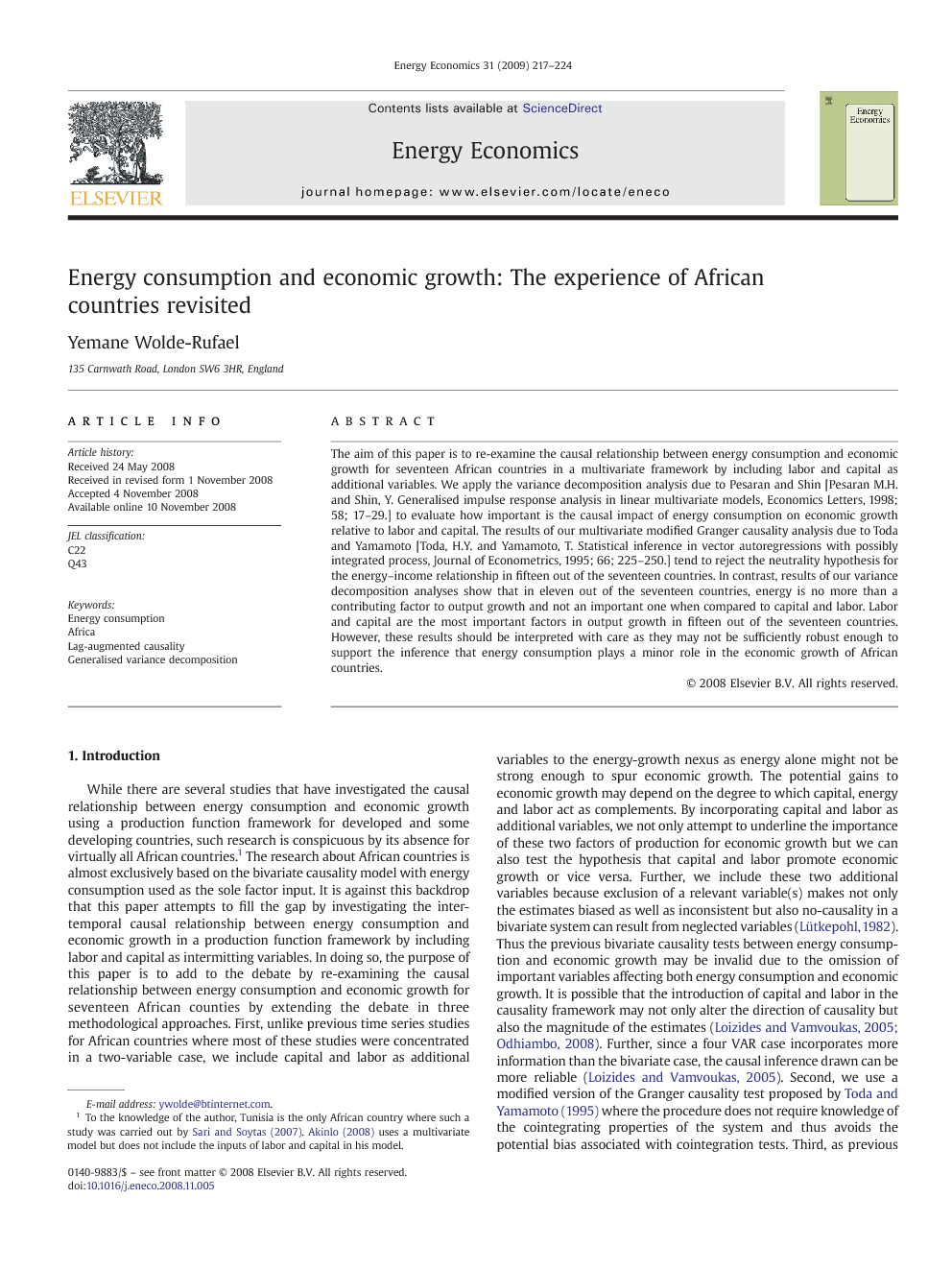 The aim of this paper is to re-examine the causal relationship between energy consumption and economic growth for seventeen African countries in a multivariate framework by including labor and capital as additional variables. We apply the variance decomposition analysis due to Pesaran and Shin [Pesaran M.H. and Shin, Y. Generalised impulse response analysis in linear multivariate models, Economics Letters, 1998; 58; 17–29.] to evaluate how important is the causal impact of energy consumption on economic growth relative to labor and capital. The results of our multivariate modified Granger causality analysis due to Toda and Yamamoto [Toda, H.Y. and Yamamoto, T. Statistical inference in vector autoregressions with possibly integrated process, Journal of Econometrics, 1995; 66; 225–250.] tend to reject the neutrality hypothesis for the energy–income relationship in fifteen out of the seventeen countries. In contrast, results of our variance decomposition analyses show that in eleven out of the seventeen countries, energy is no more than a contributing factor to output growth and not an important one when compared to capital and labor. Labor and capital are the most important factors in output growth in fifteen out of the seventeen countries. However, these results should be interpreted with care as they may not be sufficiently robust enough to support the inference that energy consumption plays a minor role in the economic growth of African countries.

While there are several studies that have investigated the causal relationship between energy consumption and economic growth using a production function framework for developed and some developing countries, such research is conspicuous by its absence for virtually all African countries.1 The research about African countries is almost exclusively based on the bivariate causality model with energy consumption used as the sole factor input. It is against this backdrop that this paper attempts to fill the gap by investigating the inter-temporal causal relationship between energy consumption and economic growth in a production function framework by including labor and capital as intermitting variables. In doing so, the purpose of this paper is to add to the debate by re-examining the causal relationship between energy consumption and economic growth for seventeen African counties by extending the debate in three methodological approaches. First, unlike previous time series studies for African countries where most of these studies were concentrated in a two-variable case, we include capital and labor as additional variables to the energy-growth nexus as energy alone might not be strong enough to spur economic growth. The potential gains to economic growth may depend on the degree to which capital, energy and labor act as complements. By incorporating capital and labor as additional variables, we not only attempt to underline the importance of these two factors of production for economic growth but we can also test the hypothesis that capital and labor promote economic growth or vice versa. Further, we include these two additional variables because exclusion of a relevant variable(s) makes not only the estimates biased as well as inconsistent but also no-causality in a bivariate system can result from neglected variables (Lütkepohl, 1982). Thus the previous bivariate causality tests between energy consumption and economic growth may be invalid due to the omission of important variables affecting both energy consumption and economic growth. It is possible that the introduction of capital and labor in the causality framework may not only alter the direction of causality but also the magnitude of the estimates (Loizides and Vamvoukas, 2005 and Odhiambo, 2008). Further, since a four VAR case incorporates more information than the bivariate case, the causal inference drawn can be more reliable (Loizides and Vamvoukas, 2005). Second, we use a modified version of the Granger causality test proposed by Toda and Yamamoto (1995) where the procedure does not require knowledge of the cointegrating properties of the system and thus avoids the potential bias associated with cointegration tests. Third, as previous empirical evidence for Africa did not attempt to evaluate the strength of their causality findings beyond the sample period, we use innovation accounting or variance decomposition analysis due to Pesaran and Shin (1998), which, unlike the conventional method, is invariant to the order of the variables in which they enter the VAR. By doing so, we can assess how each variable responds to the innovation of other variables in the system and also evaluate how important is the causal impact of energy on economic growth relative to capital and labor (Shan, 2005). The rest of the paper is structured as follows. In Section 2 we make a brief review the empirical literature followed in Section 3 by a short description of the theoretical background. The methodology is outlined in Section 4 while in Section 5 we discuss the empirical evidence. Policy implications of our empirical findings are presented in Section 6 while summary and conclusions are outlined in Section 7.