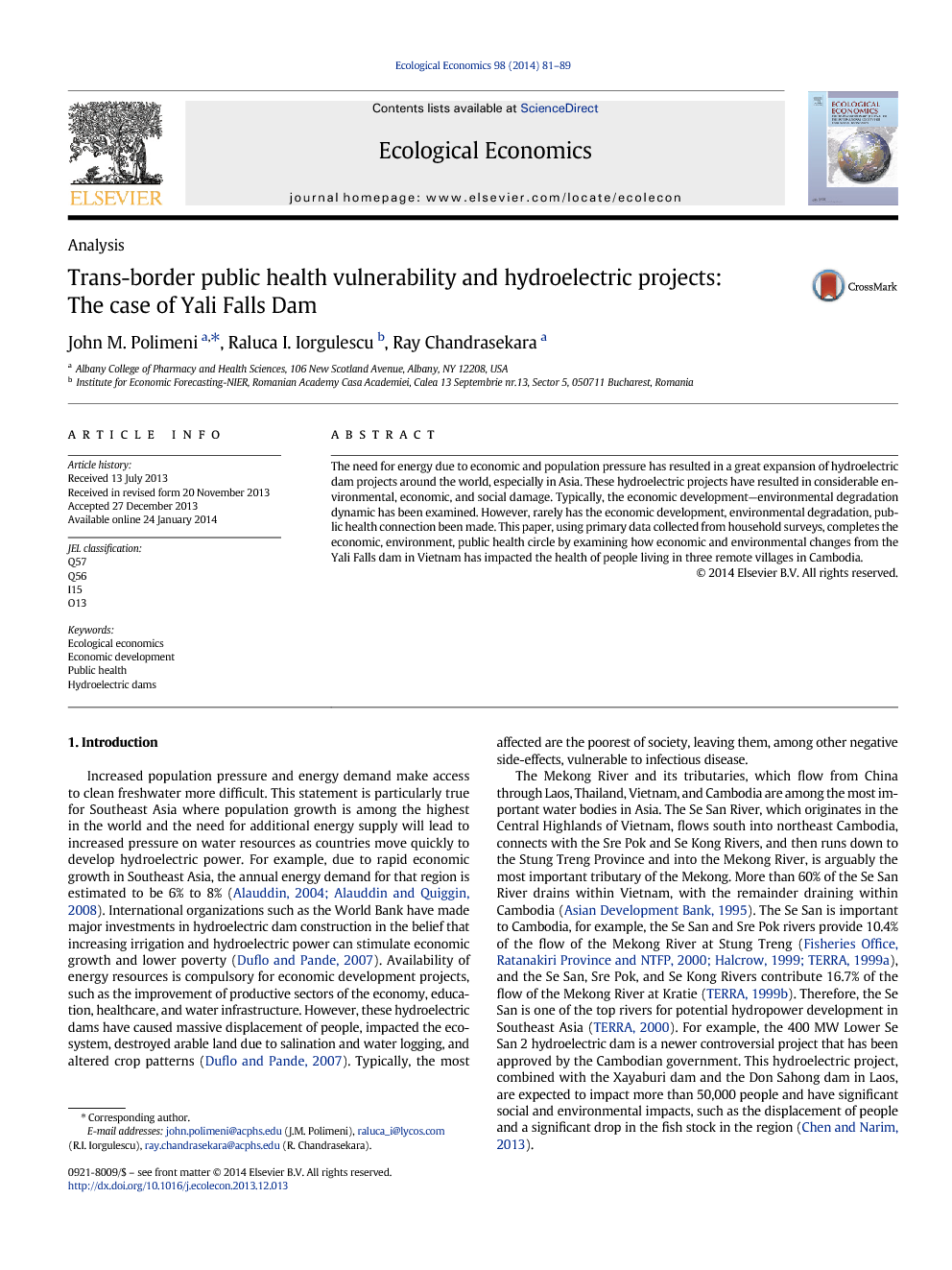 The need for energy due to economic and population pressure has resulted in a great expansion of hydroelectric dam projects around the world, especially in Asia. These hydroelectric projects have resulted in considerable environmental, economic, and social damage. Typically, the economic development—environmental degradation dynamic has been examined. However, rarely has the economic development, environmental degradation, public health connection been made. This paper, using primary data collected from household surveys, completes the economic, environment, public health circle by examining how economic and environmental changes from the Yali Falls dam in Vietnam has impacted the health of people living in three remote villages in Cambodia.

The Yali Falls Dam impacts, both positively and negatively, the people living in the region of the dam and those communities downstream as well. To understand this association requires a multifaceted approach because the dam resides in Vietnam and many of the effects impact people living in Cambodia. As shown in this paper the economic and environmental impacts of the Yali Falls Dam have added to the deteriorating public health conditions of people living in three northeast Cambodian villages, possibly more. The villagers in this area were asked about the incidence of eight diseases before and after the construction of the dam. The occurrences of each of these diseases increased substantially after the dam was built, providing significant evidence of a possible link between the Yali Falls Dam in Vietnam and increased incidents of waterborne disease in Cambodia. A clear link, but not direct causation, of the vulnerability of the people in this region to the Yali Falls Dam has been established by the results of the survey presented in this paper. These findings are important because of the use of primary data to establish an association between the dam and changes in quality-of-life, environmental and economic conditions, and public health. Furthermore, as countries in the region move to build more hydroelectric dams, this study can provide meaningful insight into the potential impacts on the population living downstream. The literature (Polimeni et al., 2008, Scudder, 1999, Mehta and Srinivasan, 1999, Srinivasan, 1997, Cernea, 1996 and Burfishers and Horestein, 1985) has shown that the health of women, in particular, is impacted by hydroelectric dams. Future research on the Yali Falls Dam will examine if gender specific health impacts have occurred. While very significant in their impact, these results should not come as surprising. Even the smallest shocks to an ecosystem and/or economic system will have a large impact on the public health of people in the region. However, the situation presented in this paper which addresses cross-boundary issues, such as water rights and adverse public health effects, is complex. In fact, the effect of the Yali Falls Dam in Vietnam on Cambodians has the potential to severely diminish already strained relations between Cambodia and Vietnam. Therefore, all the stakeholders in the Yali Falls Dam project should be involved in the decision-making processes of the operation of the dam. Such an approach would create local participation in a democratic process of water rights and usage (Bruns et al., 2005). Furthermore, information could be provided to villagers so the effects of the operations of the dam could be known. For example, the dam operators could notify people downstream when water will be released. Thus, a democratic approach involving all the key stakeholders would ensure that all parties are heard and that all the information is publicly available. This type of process would enable the concerns of the villagers to be heard. Although the Yali Falls Dam has already been built and in operation for several years, the adverse effects of the dam can still be mitigated to limit the negative externalities on people in the region, particularly downstream. Ideally, any economic, environmental, and social impact assessment that would be conducted prior to the start of projects, such as the Yali Falls Dam, would also include a public health assessment. An impact assessment of a dam project only examines one aspect, typically either environmental or economics. However, a comprehensive analysis could provide important information on how to reduce the adverse effects of the dam and allow policy-makers the opportunities to understand the environmental, economic, social, and public-health impacts of the Yali Falls Dam. Future research will attempt to develop this modeling tool. This information would provide useful data on the potential impacts of the construction of additional hydroelectric dams in the region.